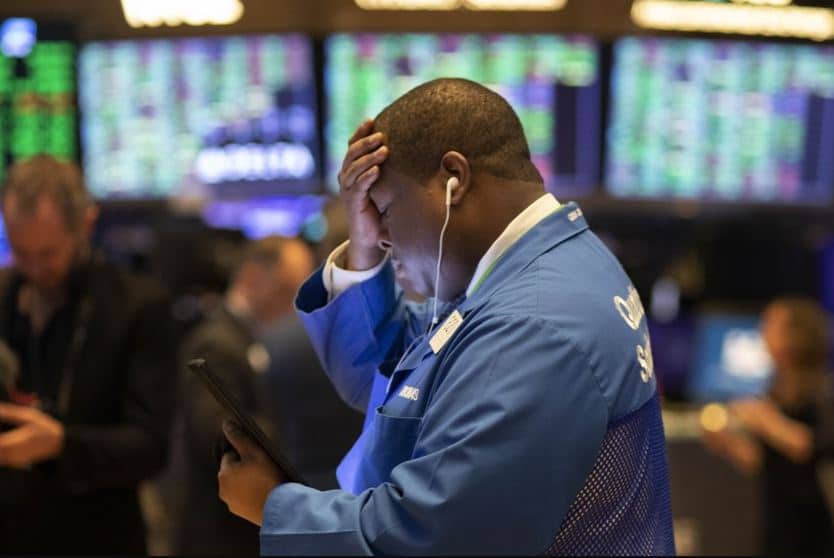 Governments in Europe are taking ever more drastic action in the virus crisis, and public life is being shut down.

Whether it’s flight bans, border closures, the closure of restaurants and shops, the declaration of a state of emergency, but also major economic stimulus programs – the list of measures with which governments in Germany and Europe are tackling the corona crisis has now been extended almost every minute.

In this dramatic environment, whose economic consequences can only be guessed at, the stock market remains in crisis mode, which means that fluctuations will remain extremely high, as will investor nervousness.

At the beginning of the new week, the US stock markets also fell massively.

The Dow Jones started trading at a steep discount, remained deep in the red and closed 12.93 per cent lighter at 20,188.52 points. The tech stocks index Nasdaq Composite also maintained its catastrophic trend after a feeble start to trading and then ended the day with a sharp drop of 12.32 per cent at 6,904.59 points. As the 5 per cent limit down rule was exceeded with the heavy losses at the opening of the stock exchange, trading was suspended.

The US Federal Reserve has resorted to further drastic measures in the face of investor panic and recession fears over the weekend due to the novel coronavirus. In an emergency action, it surprisingly lowered the key interest rate by a whole percentage point to almost zero per cent. It announced a large package of measures in coordination with other central banks. Further steps could follow due to economic damage caused by the spread of the virus. Japan’s central bank is also taking additional measures to combat the crisis.

On the Asian stock exchanges, the price has continued to fall despite the surprising cut in key interest rates by the US Federal Reserve and further steps by the Japanese currency guardians. In Tokyo, the Nikkei-225 benchmark index fell by 2.5 per cent to 17,002 points after initially reacting positively to the Bank of Japan’s interest rate decision. In China, the CSI on the Chinese mainland stock exchanges recently fell by around three per cent. The Hang Seng in Hong Kong recorded losses of a similar magnitude.

The EuroSTOXX 50 started moderately weaker and slid even deeper into the red as trading progressed. In late trading, however, it stabilized somewhat but was still 5.25 per cent lower at 2,450.37 points.

The Dax 30 fell below the 9,000 mark at the start of trading and even fell to its lowest level since 2013 at times. In the afternoon, however, it was able to limit its massive losses again, so that it ultimately closed the day “only” 5.31 per cent lighter at 8,742.25 units.

The development of the TecDAX was similar. It lost heavily at the beginning and then continued to fall. However, it also managed to recover from its low for the day and closed with a minus of 3.13 per cent at 2,286.73 points.

Commodity currencies such as the Australian or Canadian Dollar, Norwegian Krone and Russian Ruble came under pressure. A slump in the global economy would reduce demand for crude oil, among other things.

Oil prices fell below USD 30 on Monday despite another massive interest rate cut in the USA. In the afternoon, a barrel of North Sea Brent cost USD 29.92. That was $3.98 less than on Friday. The price of a barrel of WTI oil fell by 2.64 dollars to 29.09 dollars.

The troy ounce of gold was last traded at $1,516 after it fell sharply as low as $1,450. The reason for the falling gold price is said to be sales by speculative financial investors who have to compensate for losses in other asset classes as well as the high US dollar demand.

Cryptocurrencies followed suit with equities and prices fell sharply. A Bitcoin currently costs $4,950 – over 9 per cent less than yesterday. Ethereum lost over 12 per cent to $110 while XRP declined 9.1 per cent to just $0.14.

Fundamentally, there was another shock for the greenback today after a long time. The economic indicator for the New York metropolitan area, the Empire State Index, plummeted in March. From 12.9 points in February to minus 21.5 points – a decline to 3.0 points had been expected.

The fight against the coronavirus has dealt a severe blow to the Chinese economy. The Beijing Statistics Office today released a series of critical economic data, some of which recorded an unprecedented slump.

The outbreak of the coronavirus had brought China’s economy to a virtual standstill since the end of January. Due to the strict containment measures, companies had to suspend production for weeks.

Following the declaration of a state of emergency in Slovakia due to the Corona crisis, Volkswagen will probably temporarily suspend production at its plant in the capital Bratislava. The car manufacturer is preparing the move on Monday, the head of the Slovakian company announced.

Earlier, the Prime Minister of Slovakia, Peter Pellegrini, had already hinted at a corresponding step. The politician explained to journalists in Bratislava on Sunday that the number of infections with the novel coronavirus in the country was rising. So far, there are 61 confirmed cases in Slovakia.

IWF to the rescue

The Fund’s credit capacity of one trillion US dollars could be used to support member states struggling with the spread of the virus, IMF Director Kristalina Georgieva said in a blog entry on Monday.

She made it clear, however, that governments are required to take fiscal measures. Globally coordinated economic stimulus packages were becoming more urgent hour after hour. The IMF had flexible emergency loans with a volume of 50 billion dollars ready for rapid use by emerging and developing countries. Ten billion dollars could be granted at zero interest.

Twenty additional countries have already asked for this, IMF head Kristalina Georgieva wrote in a blog on Monday. It remains unclear which countries are involved. Last week Iran had announced that it wanted to apply for emergency loans from the IMF because of the Corona crisis. According to Georgieva, the IMF has a total of one trillion dollars available for loans.

Because of the virus, large parts of public life have come to a standstill, causing massive economic suffering. To limit the damage, a coordinated and powerful response from governments is necessary, the IMF said. A financial policy initiative similar to the one taken during the global financial crisis of 2008/09 will probably be required. There is still room for improvement. Many countries have so far made short-time working possible, and are also providing liquidity support and tax relief.

Most recently, the IMF had already pledged around 50 billion dollars to poorer countries and emerging markets. They are under particular pressure because of the corona crisis.