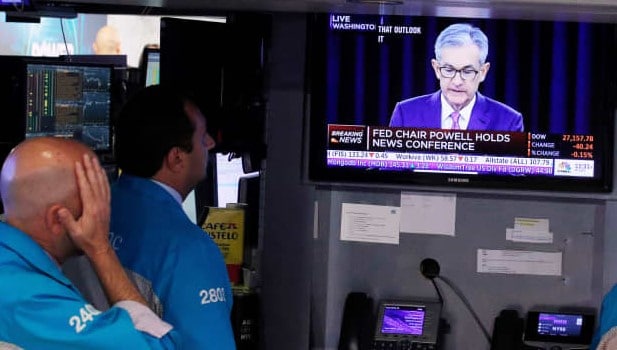 On Wall Street, the markets went into reverse at the beginning of the trading week. Inflation fears remained persistent and came to the fore once again today. This also weighed on markets such as the European stock markets on Monday.

Investors feared that the US Federal Reserve could raise interest rates sooner than expected if price pressures persist.

Even reassuring words from Fed Vice Chairman Richard Clarida did not help. Clarida did admit to upward pressure on prices. However, this is likely to be temporary. The latest labour market report showed that “we have not made substantial progress”, the central banker said. Clarida also assured that there would be a warning for the financial markets if the Fed were to limit its bond purchases. Currently, the Fed buys securities with a volume of 120 billion US dollars per month to support the American economy.

After the previous week, which was characterised by strong fluctuations, Wall Street had a weak start to the week. The Dow Jones opened with a marginal loss and then widened this. It ultimately ended the trading session 0.16 per cent lower at 34,327.79 points. The NASDAQ Composite also fell in the end, closing 0.38 per cent at 13,379.05 points. he S&P-500 lost 0.25 per cent to 4,163 points.

Currently, the risks to the economy, such as inflation and the increase in COVID-19 cases in some parts of the world, have returned to investors’ focus.

In the corporate sector, news from the media sector stood out. A new heavyweight is emerging in the sector with Hollywood studio Warner Bros and TV channels such as HBO, CNN and Eurosport. The telecommunications giant AT&T is splitting off its WarnerMedia division and merging it with the TV group Discovery. AT&T and Discovery shares initially gained significantly but could not maintain the gains and slid into the red.

The majority of the most important Asian stock exchanges rose at the start of the week. Although Japan’s leading index, the Nikkei, lost 0.92 per cent to 27,824.83 points, China saw a clear upward trend. On the Chinese mainland, the Shanghai Composite climbed 0.78 per cent to 3,517.62 points, while the Hang Seng was also 0.59 per cent firmer at 28,194.09 index points on Hong Kong’s stock exchange.

Thus, most Asian markets continued their recovery phase from Friday. The positive data from the USA provided support. Better-than-expected industrial production figures from China also lifted sentiment. In addition, Chinese retail sales in April were 17 per cent higher than in the same period last year.

The European stock exchanges were weighed down by the weak Wall Street and fell today. After a stable start, the EuroSTOXX 50 slipped into the red and finally ended the day 0.27 per cent lower at 4,006.59 units.

The DAX also turned negative after early gains on Frankfurt’s stock exchange. However, it then almost managed to work its way back to Friday’s closing price and closed only 0.13 per cent weaker at 15,396.62 points. In contrast, the TecDAX held its ground in the profit zone throughout the day and ultimately ended the day 0.25 per cent higher at 3,336.13 points.

New economic data from China suggest that the extremely high upward momentum of the recovery has recently slowed down again somewhat. This also caused a sluggish start to the new week in Europe.

Trading on the foreign exchange market was without major impulses, and price movements were limited. During the day at 1.2159 US dollars, the euro stabilised and was thus traded at roughly the same rate as last Friday. The greenback was supported by Chinese economic data, which came in as slightly weaker than expected.

Against the background of investors’ growing interest in inflation indications, oil prices are also coming into focus. After all, consumer prices depend to a large extent on developments in the oil market. In this context, rising oil prices and rising inflation rates are expected in the coming months due to the statistical base effect alone. At the beginning of the week, oil prices tended higher again. Brent oil from the North Sea was traded for 69 cents more than on Friday at 69.40 US dollars. The barrel price for US WTI rose by 71 cents to 66.08 dollars.

Meanwhile, rising inflation expectations are also reflected in the commodity markets. Precious metals, in particular, received another solid boost, taking the price of gold up 1 per cent to 1,866 US dollars per troy ounce, the highest level in more than three months.

Cryptocurrencies remained under pressure after Elon Musk added more oil to the fire he started on the weekend. Though, market experts and analysts see a bottom forming and expect prices of digital assets to rise again very soon. Bitcoin dropped intraday as low as $42,000 before bouncing back to $45,000, a minus of just 0.3 per cent. Similarly, Ethereum lost 0.4 per cent to $3,400, while Binance Coin and Cardano dropped 3.5 per cent to $523 and $2.07, respectively. XRP was standing strong and rose 8.2 per cent to $1.53, while Shiba Inu received tailwind from Ethereum co-founder Vitalik Buterin. It was made public that he burned 410 trillion of his Shiba Inu coin holdings, approximately 40% of the total coin supply. Investors now speculate that this will boost the price of the meme token strongly.

Industrial growth in China slowed in April. The world’s second-largest economy posted a 9.8 per cent year-on-year increase in the sector last month, as data provided by the National Bureau of Statistics (NBS) showed. The data matched the forecast of analysts polled by Reuters but showed a slowdown in growth from March’s 14.1 per cent rise. China’s economy showed steady improvement in April, but there were new problems, the NBS said of the data. Speaking at a Politburo meeting, the Beijing government said the recovery was uneven as the economy still lacked solid ground after the corona crisis. Retail sales rose 17.7 per cent year-on-year in April, well short of the 24.9 per cent increase analysts had expected. In March, consumers had still boosted the economy with a jump of 34.2 per cent.

Manufacturing business activity for the New York metropolitan area in the USA declined moderately in May. The Fed Bank of New York’s index of general business activity in the District’s manufacturing sector decreased to 24.3 from 26.3 in the previous month. Economists interviewed by Dow Jones Newswires had forecast a decline to 24.8.