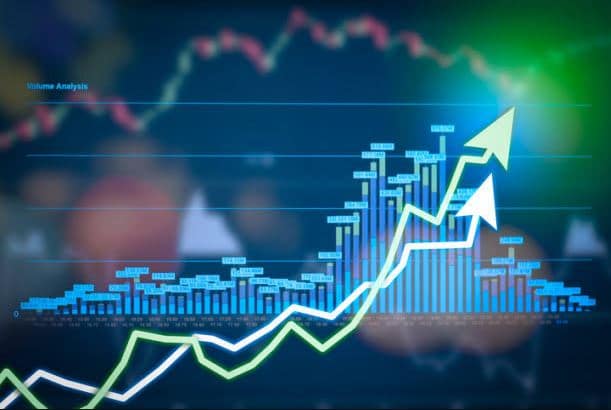 Positive start into the week

In anticipation of further injections of money from the central banks and new economic stimulus packages, investors dared to leave cover at the end of the week. The Dow Jones Standard Index in New York on Friday was 1.1 per cent higher at 25,851 points. The broader S&P-500 gained 1.4 per cent to 2,887 points. The Nasdaq technology exchange index rose by 1.6 per cent to 7,893 points.

Technology stocks were, particularly in demand. Nvidia shares increased by 6.2 per cent after the chip group presented better than expected business figures. Apple papers increased in price by two per cent. Apple boss Tim Cook has warned President Trump in a conversation in the White House against an expansion of China’s tariffs. Apple produces in China and could be one of the biggest losers in a further escalating customs dispute. The day’s winner in the Dow, where there were no losers, was the paper of the conglomerate 3M.

At the start of the new week, the stock markets in the Far East are going up sharply.

Friday evening’s Wall Street targets are positive, helping the most significant Asian indices to gain ground. Also, the People’s Bank of China (PBoC) is providing support. The central bank has pushed through a reform of its interest rate mechanism. The aim is to reflect real market interest rates better.

In Europe, too, the stock exchanges are starting in green terrain. The EuroSTOXX 50 rang in the new week 0.12 per cent stronger at 3,332.93 points and remains in the profit zone.

Last week, the DAX reached a six-month low due to fears of recession and lost slightly more than one per cent. By the end of the week, however, the DAX had risen by around 1.3 per cent due to new hopes for a solution to the trade conflict between the USA and China. This trend should continue on Monday, especially as the stock market signals from Asia are also positive.

The euro continues to trade close to the 1.11 US dollar mark on Monday. In the morning, the common currency costs 1.1090 dollars, about as much as on Friday evening. The Sterling is picking up bullish momentum and currently costs 1.2125 US dollars. The end of July witnessed price slip beneath important support at 0.6828 for the Aussie (AUD/USD), which now serves as a firm resistance level. The long-term downtrend, intact since the beginning of 2018, remains unbroken, with further selling likely on the cards.

The gold price didn’t move much either and is currently trading below the 1,510 dollar handle.

Oil prices rose slightly in early trading hours on Monday. In the morning, a barrel (159 litres) of North Sea Brent cost approximately 0.8 per cent more. The price for a barrel of the US variety West Texas Intermediate (WTI) rose by 0.7 per cent to 54.73 dollars.

On the oil market, the fact that the trade dispute between the USA and China has at least not intensified over the past few days has brought some relief. In the weeks before, oil prices were in part heavily burdened by the dispute. The decisive factor is that every escalation of the conflict is associated with adverse effects on the global economy. This is likely to be reflected in a weaker demand for crude oil. The price of gold tends to remain virtually unchanged at 1,507 dollars per troy ounce. It thus remains at a high level.

Cryptocurrencies gained some steam again over the weekend with Ripple’s XRP leading the pack in terms of gains. The number three digital asset in market capitalization rose by almost 9 per cent in only a few hours on Sunday and is currently being traded just under the $0.29 mark. Bitcoin rose by over 5 per cent in the past 24 hours and costs around $10,700 this Monday morning.

READ ALSO
Will this change-of-mind give cannabis stocks the next boost?

Key events this week, which will most likely be market-movers for several assets include:

Despite recent profit warnings, the chemical company BASF intends to raise its dividend in the future. “I think investors have understood the reasons for the weaker performance and forecast quite well… We not only want to maintain the dividend at least, but we also want to increase it continuously,” Group Chairman Martin Brudermüller told the Handelsblatt. BASF shares rose by 0.8 per cent.

Vapiano papers fell by up to 12 per cent. The head of the ailing restaurant chain, Cornelius Everke, surprisingly announced on Sunday his resignation for the end of August. Personal reasons were cited in a company statement. Until a successor is found, chairman of the supervisory board Vanessa Hall is to lead the company until at least April 2020.

For example, the AppStore recorded growth of around 19 per cent in July, as Morgan Stanley analyzed based on external data. In June, it was still an increase of 14 per cent. This growth was driven by sales in China, which increased by 20 per cent in the summer month. Morgan Stanley analyst Katy Huberty thus sees the iPhone group on the right track for the current quarter, after the tech company had already been able to come up with positive surprises in the last quarter of the year. The company’s strategy of becoming less dependent on iPhone sales seems to be paying off.