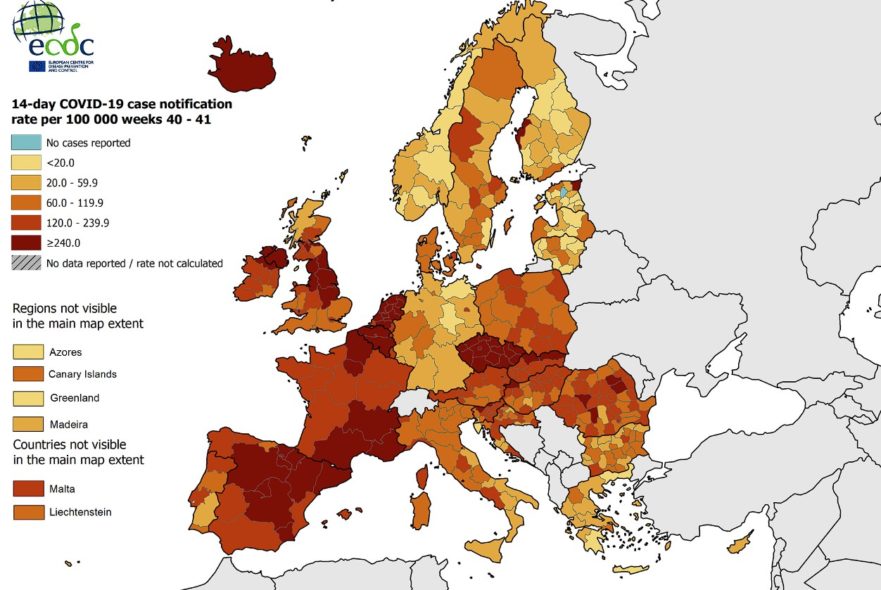 The continuing intimidating news about the spread of the coronavirus, especially in Europe, has again burdened the stock markets today. Many traders, investors and investors became cold feet and sought safety, heading for safe havens and selling stocks.

The big price question now is, if the US reporting season, which will get underway in the next few days, will bring a positive turnaround?

Today in the late evening, after the US stock market closes, IBM heralds the start of the tech reporting season. Netflix and Tesla with numbers will follow in the course of the week. Investors will most likely take a close look at the latter two companies in particular to see whether the substantial price gains of recent months are fundamentally justified. The course of the American tech reporting season will once again be a decisive factor in determining how the market as a whole develops. After all, the heavyweight tech stocks were and still are the main drivers of prices on Wall Street.

The US stock markets trended significantly lower at the start of the week.

Market participants discussed the latest statements by US politician Nancy Pelosi, who had set a deadline until Tuesday, raising hopes that there might be some movement in the negotiations on new aid measures before the US elections after all. Nevertheless, investors on Wall Street were cautious at the start of the week.

Stock markets in Asia showed mixed results at the start of the new week.

While hopes of a US stimulus package were largely responsible for the positive mood among investors, China’s GDP slowed down. China’s economic growth did not accelerate as strongly as expected in the second quarter. In contrast, retail sales rose last month.

The new record numbers of corona infections have again cautioned investors in Europe. The EuroSTOXX 50 was able to post a significant premium in early trading and initially remained on positive territory. In the further course, however, it slipped into the red and ended trading 0.32 per cent lower at 3,235.16 index units.

In the wake of the weaker Wall Street, the Dax 30 also failed to gain momentum in Frankfurt. Germany’s leading index closed 0.4 per cent lower at 12.854 points after jumping over the 13,000 point hurdle in the morning. The TecDAX also rose at first but was later slightly lighter. In the end, the index fell by 0.30 per cent to 3,151.98 points.

The European stock markets returned from their highs on Monday – there was talk of a lack of follow-through purchases. The corona situation, as well as renewed stimulus hopes from the US, were once again the main market drivers.

The euro held its ground in Forex trading at a higher level in US trading on Monday. Most recently, the European common currency was exchanged for 1.1766 US dollars, after it had crawled close to the 1.18 US dollar mark during the European session. In Asian trade, the euro was still exchanged at just over 1.17 dollars.

The price for “real” gold, on the other hand, appreciated amidst a renewed risk-off sentiment again today. During the day it reached highs of up to $1,918.50 per troy ounce but ultimately closed at $1,903.

As a sign of continued recovery after the corona collapse at the beginning of the year, China’s economy grew again in the third quarter – albeit less than expected. The second-largest economy grew by 4.9 per cent year-on-year, the Beijing Statistics Office announced on Monday. Analysts expected a GDP growth of 5.2 per cent. However, retail sales came in at 3.3 per cent year-on-year, beating consensus of only 1.8 per cent. Similarly, Chinese industrial production rose 6.9 per cent while experts only anticipated output of 5.8 per cent.

Japan’s exports fell more slowly in September than in the previous month. Official data from the Ministry of Finance (MOF) on Monday showed a 4.9 per cent year-on-year decline. Economists, however, had only expected a decrease of 2.4 per cent.

Teamviewer’s rapid rise in the share price is being used by its major shareholder to make money. TigerLuxOne, an investment vehicle advised by the British investment company Permira, announced the sale of more than 10 per cent of the share capital of the provider of remote maintenance and video software. The sale would reduce Permira’s stake from the current 39 per cent to a good 28 per cent. Teamviewer’s share price collapsed by more than 5 per cent in late trading.

Billion-dollar takeover in the oil industry

The IT veteran IBM suffered further business losses in the third quarter despite booming cloud services. In the three months to the end of September, sales fell by almost 3 per cent year-on-year to 17.6 billion dollars (15.0 billion euros), the Group announced on the Monday after the close of the US stock market. Net profit nevertheless increased by 2 per cent to 1.7 billion dollars.

Although the results were generally in line with market expectations, the share price initially reacted with slight losses after the close of the trading session. Due to the continued increased uncertainty caused by the pandemic, IBM once again did not provide an outlook for the rest of the fiscal year. This was not well received by investors.