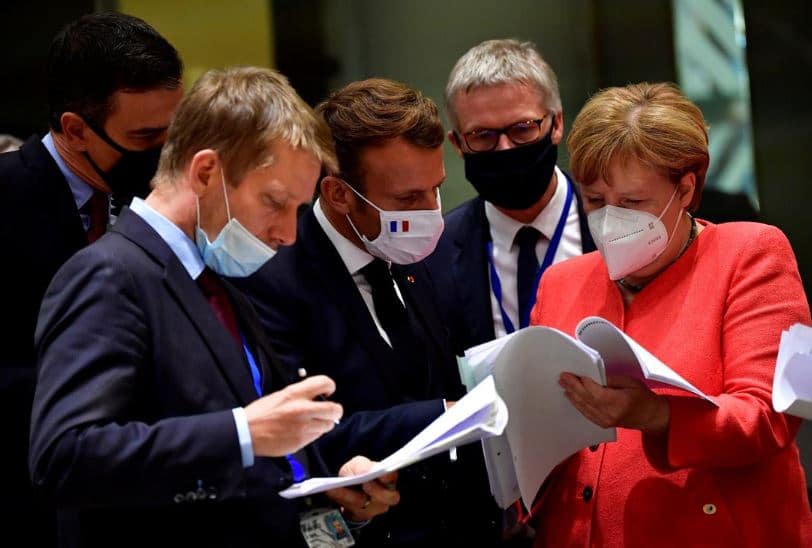 After four days and four nights, EU leaders reached agreement on the Corona aid fund and the Union’s next seven-year financial framework. In the course of this, they are talking about a historic step towards European unity. Thus, it seems that nothing more stands in the way of a continuation of the stock exchange party – corona and its impact on the economy and society are entirely forgotten.

In total, the EU reconstruction fund is worth 750 billion euros! The proportion of subsidies that do not have to be paid back has been reduced from 500 to 390 billion euros under pressure from a group of countries around the Netherlands and Austria. Another 360 billion euros are available as loans.

The heads of state and government also reached agreement on the highly controversial question of whether EU funds can be cut in future if the rule of law is violated. This requires a decision in the Council of Member States by so-called qualified majority. The next EU financial framework for the period 2021 to 2027 was also adopted, from which programmes for farmers, regions, companies or researchers, for example, will be financed. It has a volume of 1074.3 billion euros.

Also, renewed hopes for corona vaccines fanned the flames of today’s trading day and in many places drove prices up.

Wall Street picked up steam after the NYE open and finished the day in bullish territory.

The ongoing high infection figures in the USA continued to cause unrest among market participants. However, investors were given new hope by various encouraging news regarding a vaccine against Covid-19. Announcements of potential further stimulus packages also sparked the buying mood.

Asia’s major stock exchanges were still unable to find a common direction on Monday. The Japanese leading index Nikkei 225 closed 0.1 per cent up at 22,717 points. In China, the CSI 300 with the 300 most important shares of the Chinese mainland stock exchanges rose by more than 2 per cent. The Hang Seng in Hong Kong rose moderately.

In anticipation of an agreement at the EU summit, European investors went on a shopping spree. The EuroSTOXX 50 started lower in early trading on Monday – but ultimately gained 0.68 per cent to 3,388.34 points.

Among other things, Monday’s focus was on the EU summit on the corona aid package. Investors seemed to be banking on early recovery of the economy and on a vaccine against the coronavirus, which remains an uncertainty factor.

The EU summit also moved the foreign exchange market (Forex). Hopes of an agreement drove the euro up to 1.1467 US dollars, the highest level in more than four months. In the early evening, the common currency settled at around $1.1440. Consequently, other currencies also rose against the US dollar. For example, the Australian dollar rose above the $0.70 mark.

Oil prices fell a little on Monday. There were no strong impulses in the oil market, leaving North Sea Brent crude almost unchanged at $43.05. The West Texas Intermediate (WTI) variety price declined by only 3 cents to $40.56.

Gold prices rose again and even managed to stay above the $ 1,820 an ounce mark. But silver is also becoming increasingly popular among investors. On Monday the price of a troy ounce of the precious metal rose to $19.70. On the futures market, the prices of some contracts for future delivery of the metal even rose above the round $20 mark.

The week started with Japan‘s trade balance. Japanese exports fell by more than a fifth for the third consecutive month in June due to the Corona pandemic. In June, the value of exports fell by 26.2 per cent to 4.9 trillion yen (about 40 billion euros) compared to the previous year, the Japanese Ministry of Finance announced in Tokyo this morning. The decline was thus somewhat stronger than experts had expected. In April and May, exports were down by 21.9 per cent and 28.3 per cent respectively year-on-year.

Imports in June were slightly better than expected. In June, they fell by 14.4 per cent year-on-year, while economists had expected a minus of 17.6 per cent. In May, imports had dropped by more than a quarter.

The producer price index was reported from Germany today. The price level at the producer level continued to fall in June. According to the Federal Statistical Office, producer prices were 1.8 per cent lower than a year ago. Analysts had expected a decrease of 1.7 per cent. In the previous month, the price drop had been 2.2 per cent.

Oil giant Chevron has signed an agreement to buy competitor Noble Energy Inc. at around $5 billion, the largest transaction in the oil industry since the coronavirus pandemic sent it into shock.

The acquisition, which Chevron plans to implement entirely with its shares, Noble values at $10.38 per share, the announcement says. For each Noble share, shareholders will receive 0.1191 Chevron shares, a premium of about 7.6 per cent over Noble’s closing price on Friday. Including Noble’s high level of debt, the transaction would even reach a total value of 13 billion dollars.

The purchase of Noble is Chevron’s first significant strategic move since the company lost a high-profile bidding war for competitor Anadarko Petroleum against Occidental Petroleum last year. Noble Energy’s stock had already risen 6.8 per cent in pre-market trading before the announcement of the takeover because the Wall Street Journal had reported from informed circles about the imminent conclusion of the contract. On the NASDAQ it then closed 5.44 per cent up at $10.18.

Profit dip at Munich Re

The cancellation and postponement of major events and the costs of business interruptions due to the corona pandemic cost Munich Re dearly. The world’s largest reinsurer recorded corona-related losses in reinsurance of around €700m in the second quarter of 2020. As a result, the net profit collapsed to a good €600m. Analysts, however, had expected even less, namely 405 million euros. In the previous year, the Group had posted a quarterly profit of 993 million euros. The MüRü share gained 0.6 per cent.

The Chinese fintech company Ant Financial has started work on an issue on the Shanghai Stock Exchange Star and the Hong Kong Stock Exchange, the operator of the online payment service Alipay announced. Ant did not give details about the schedule or the volume of the planned IPO.

Ant Financial was recently valued at more than 200 billion dollars – more than any other Fintech company in the world. With Alipay, Ant operates the dominant payment service in China and also offers loans, insurance and asset management.