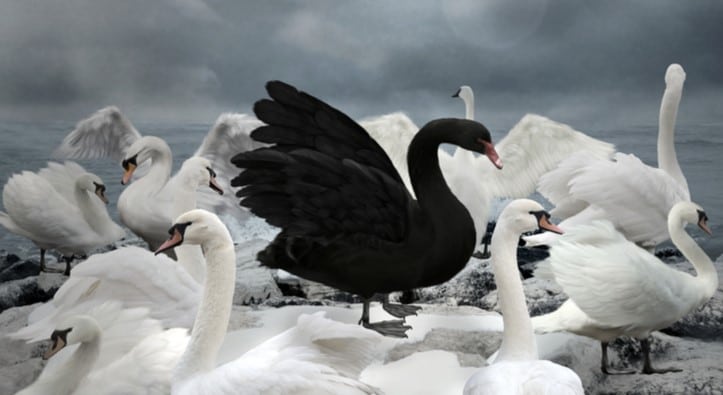 Looking at the current world situation, one finds a dangerous mix of several potential black swan events. The extremely high inflation in almost all countries, the smouldering Ukraine/Nato-Russia conflict, the political question marks in the USA around Hilary Clinton, Joe Biden and the Democrats, Canada and Justin Trudeau’s mess and the issue of Covid, mandates, etc. hang over the heads of investors like the sword of Damocles.

After a fairly friendly start, the stock markets came under intense pressure because of the almost hourly escalation in Eastern Europe. Wall Street was unable to react due to a public holiday.

In after-hours trading, there was further excitement about Moscow’s recognition of the two separatist areas in Donetsk and Luhansk, which will trigger EU sanctions. The recognition will presumably make it more likely that the Kremlin will meet the separatists’ demands for military support. Russian President Vladimir Putin also questioned Ukraine’s statehood and levelled severe accusations against its leadership and NATO in his televised address.

The stock exchanges remained closed after the weekend on Wall Street due to the bank holiday “Washington’s Birthday”. The Dow Jones last posted a loss of 0.68 per cent on Friday, closing at 34,079.18 points. The tech index NASDAQ Composite had fallen more sharply before the weekend. It had slipped 1.23 per cent to 13,548.07 points.

Risk appetite waned ahead of the long weekend with a holiday break on Monday. Participants spoke of nervous business amid ever more alarming news surrounding the flashpoint of Ukraine. Investors were startled by reports of continuing fighting in eastern Ukraine. According to their statements, the Russian separatists had started to bring civilians from the embattled region to Russia. Traders said this move could serve as a pretext for Russia to invade Ukraine. The White House also warned again of an “imminent invasion” of Ukraine by Russian troops.

A war between Ukraine and Russia could prolong elevated inflation in developed economies by disrupting supplies of key commodities, said portfolio manager Hani Redha of Pinebridge Investments. Russia is one of the world’s biggest oil suppliers, the largest exporter of wheat and a significant producer of metals such as palladium, aluminium and nickel.

The stock exchanges in Asia were mainly lighter at the beginning of the week but were not yet affected by the Eastern European turmoil. In Tokyo, the Japanese benchmark index Nikkei lost 0.78 per cent to 26,910.87 points on Monday. The Shanghai Composite closed almost unchanged on the Chinese mainland at 3,490.61 units. Meanwhile, the Hang Seng lost 0.65 per cent to 24,170.07 points in Hong Kong.

Hopes for a possible solution to the Russia-Ukraine conflict provided a slight recovery in the markets, but this was not enough to create positive signs in Asia. According to the Elysée Palace, US President Joe Biden and his Russian counterpart Vladimir Putin have agreed “in principle” to a video summit proposed by French President Emmanuel Macron. Nevertheless, an escalation is still possible at any time.

Investors in the European stock markets remained very nervous at the beginning of the week. The EuroSTOXX 50 could not defend its initial gains and instead went into the evening 2.17 per cent lower at 3,985.71 units.

Although the DAX had started significantly firmer, it had already given back its initial gains in the morning and fell into the red zone. It ultimately ended Monday’s trading session 2.07 per cent weaker at 14,731.12 points. After a friendly start, the TecDAX also turned negative and closed 1.80 per cent lower at 3,155.67 points.

After the agitated mood of the previous week, slight signs of relaxation followed at the start of the new week but were followed by more pessimistic statements again. The situation on the Russian-Ukrainian border continued to be the dominant topic. French President Emmanuel Macron urged US President Joe Biden and Kremlin leader Vladimir Putin to hold a summit to de-escalate the situation. According to Kremlin spokesman Dmitry Peskov, however, there are no concrete plans yet for a meeting between Putin and Biden.

The euro came under pressure again on the Forex market in the evening and fell to $1.1302. As is usually the case when the geopolitical situation worsens, the dollar, Swiss franc and yen benefited from their reputation as “crisis currencies”.

Given the new global developments, oil prices continued to rise in the evening. Only one factor currently promises possible relief: If the USA and Iran reach a new nuclear agreement soon, this could put oil prices under pressure, as Iran could throw more than one million barrels per day extra onto the market. Brent oil rose to $96.40 per barrel, while WTI jumped to $93.26.

Gold also pushed higher again as risk aversion dominated the market. In late trading, the troy ounce was valued at $$1,909, about $15 more than at the trading start.

On the other hand, cryptocurrencies suffered greatly, and the overall market capitalization fell by over 5 per cent to $1.72 trillion. Bitcoin and Ethereum dropped unisono by 4.8 per cent to $37,200 and $2,605, respectively. Other so-called altcoins plummeted even sharper. For example, XRP, Cardano and Solana lost more than 11 per cent, and AVAX even 13 per cent.

Producer prices in Germany rose strongly in January, exceeding forecasts. Compared to the previous month, prices increased by 2.2 per cent, the Federal Statistical Office announced today. Economists surveyed had expected an increase of only 1.4 per cent. Compared to the previous year, prices rose by 25.0 per cent, the highest rate since surveys began in 1949. Economists had predicted an increase of 24.0 per cent. The main reason for the year-on-year increase in producer prices continues to be the price development of energy. Energy prices in January were, on average, 66.7 per cent higher than in the same month last year.

In the wake of relaxed corona restrictions, economic growth in the eurozone accelerated surprisingly strongly in February, which at the same time caused prices to rise. According to IHS Markit, the composite index for production in the private sector – industry and service providers combined – rose to 55.8 points from 52.3 in the previous month versus 52.9 expected.