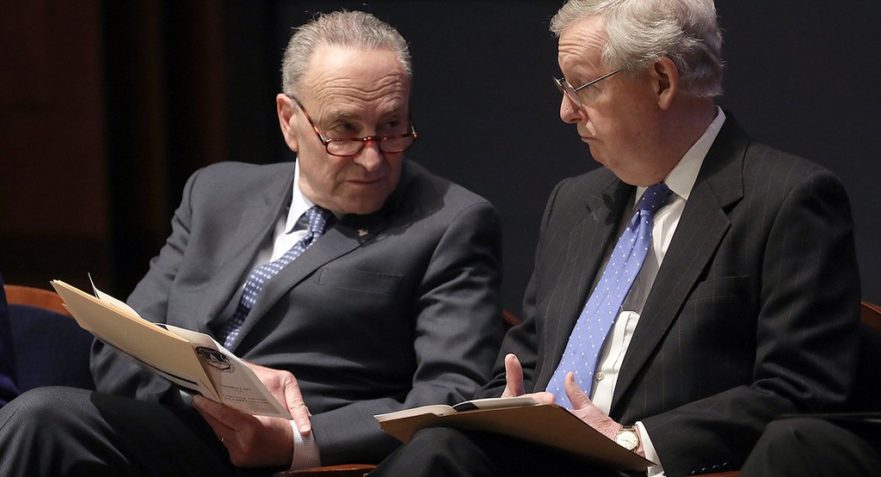 Hallelujah, after months and months of back and forth negotiations and blaming the other party, Democrats and Republicans in the US Congress have agreed on another corona stimulus package. In the end, it’s not the massive package that stock market bulls had hoped for, but at least the topic is off the table. Republican and Democratic leaders in the US Senate, Mitch McConnell and Chuck Schumer announced the agreement on Sunday evening (local time) in the Congressional chamber. McConnell said the package was worth around 900 billion US dollars.

According to Schumer, among other things, further financial aid for small businesses and a temporary increase in unemployment benefits of 300 dollars a week are envisaged. Citizens with a certain maximum income are to receive a one-time direct aid payment of 600 dollars per capita. Money for schools, child care and for the distribution of vaccines in the country is also planned.

The long-anticipated breakthrough came, however, at a rather bad time: negative news on the corona front put heavy pressure on the financial markets, resulting in flash crashes of multiple assets: stocks, precious metals, digital assets and many currencies, such as the British pound, AUD, CAD, EUR, GBP, etc. posted heavy losses. The greenback was, as a safe haven in troubled times, in high demand.

The US stock exchanges ended Monday’s trading with different signs. The Dow Jones, like the rest of the markets, started with negative tendencies, but fought its way back up and ended 0.12 per cent firmer at 30,215.99 points. The NASDAQ Composite also started 1.25 per cent lower at 12,596.14 points and was also able to stem its losses in the day. With a discount of 0.10 per cent, the tech stock market barometer went into the evening at 12,742.52 points.

Although investors breathed a sigh of relief due to the US economic stimulus package, which was agreed at the weekend after a long period of negotiations, news about a mutated variant of the coronavirus in Great Britain dampened the euphoria.

The Asian stock markets once again failed to find a common direction at the start of the week. The Japanese benchmark index Nikkei closed with a minus of 0.18 per cent at 26,714.42 points. On the Chinese mainland, the Shanghai Composite climbed by 0.76 per cent to 3,420.57 points by the end of trading. In Hong Kong, however, the Hang Seng fell 0.72 per cent to 26,306.68 index points.

On the one hand, investors rejoiced because US policymakers finally agreed on a 900 billion US dollar stimulus package. But the failure to reach an agreement in the Brexit negotiations so far weighed on sentiment, as did the worsening corona pandemic. Numerous countries reported record numbers of newly infected people and are increasingly shutting down their economies and public life as a result. Also, a mutation of the virus has now emerged in the UK that is even more contagious and which politicians say is out of control. In response, many European countries are closing their borders for traffic from the UK.

Investors on the European stock exchanges increasingly pressed the sell button today. The EuroSTOXX 50 started with losses and also fell massively in the further course of trading. The index ended the day 2.68 per cent lower at 3,450.77 points.

At the end of a miserable trading day, the German Dax posted a minus of 2.82 per cent to 13,246.30 points and is thus again below the psychologically important mark of 13,300 points, around which the leading index had repeatedly hovered in recent weeks. The TecDAX also lost significantly after a weaker start. By the close of trading, it had fallen by 1.82 per cent to 3,137.88 points.

Europe is increasingly sealing itself off from Great Britain after a new variant of the coronavirus appeared there. The extensive closure of the main British island could disrupt supply chains in particular. Also, there was still no agreement in the Brexit negotiations.

The euro was able to stop its initial slide and was last traded at 1.2247 US dollars. In European morning trading, it had dropped to 1.2130 dollars. With an upward jump, the pound also recovered its losses against the euro and the US dollar. However, the highs on the Forex market of the British national currency have come to an abrupt end. The new corona situation and the unsuccessful Brexit negotiations are taking their toll. However, the pound has at least recovered somewhat in the late afternoon and “only” lost around 1.2 per cent to 1.3350 US dollars. The sterling had its low at under 1.32 dollars in the early morning.

The renewed corona worries also made itself felt on the commodity markets. The price of Brent crude even slipped below the 50 US dollar mark at times, as many investors preferred to close out their positions. Only last week, oil prices had reached their highest levels in more than three quarters of a year.

The price of gold fell intraday as low as to $1,855 after it had crossed the $1,900 mark during the Asian trading session. At the end of the day, the precious metal had recovered to $1,881 per troy ounce when the rest of the market had digested the bad news from Britain.

Cryptocurrencies were also hit by the selling-wave of investors. Bitcoin lost 5.2 per cent to $22,700 while Ethereum dropped 6.6 per cent to $602. XRP was hit much harder, not only in light of the overall negative sentiment but also because of news that broke that the SEC was to sue Ripple for wrongfully selling XRP many years ago. Even though the story seems to be negative for the third-largest cryptocurrency by market capitalization, many market observers see this as the moment that XRP and other digital assets finally get clarity on how they are going to be treated by the US regulators. In the meantime, the XRP price fell by 16 per cent to $0.4710.

With a stock market value of more than 600 billion US dollars, the company led by Elon Musk will be among the top 10 in the broad-based S&P 500. The index inclusion is likely to have led to major shifts in advance, especially in index funds, according to a market expert.

With the continuation of their brilliant rally, the papers of Nike have reached another record high at the start of the week. Better-than-expected quarterly figures, which the US sporting goods manufacturer had already presented after the close of trading on Friday, and an increase in sales forecasts for the current financial year provided the impetus for the strong rise in the share price to almost 148 US dollars. At the end of trading, the shares of the Adidas competitor still gained 4.92 per cent at 144.04 dollars.

Nike continues to benefit from booming internet sales in the Corona pandemic. The company was able to increase sales in all regions in the second quarter until the end of November, but especially in China.