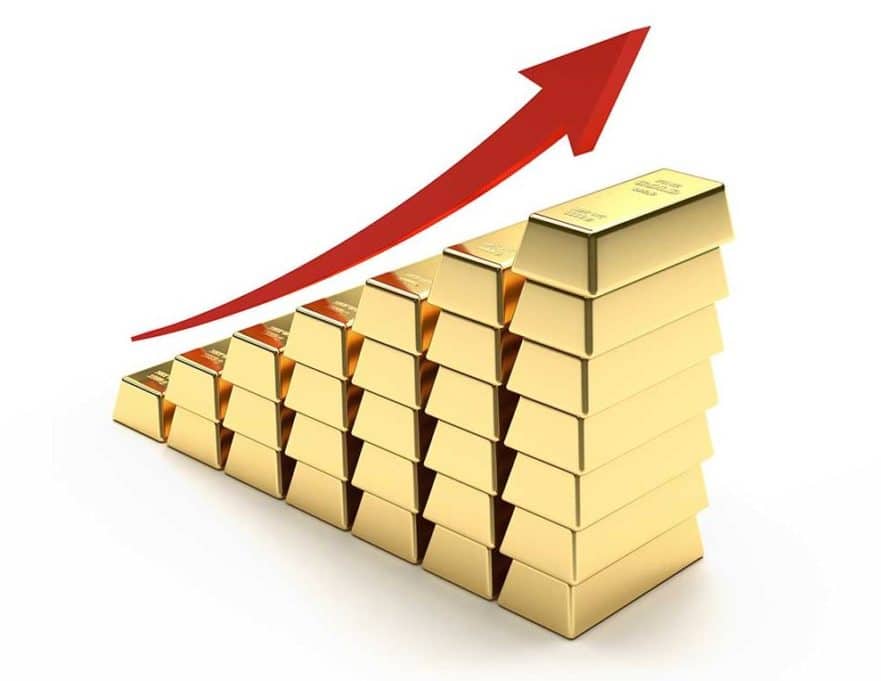 Gold boom is back

The first trading day of the new trading week was also not for the fainthearted investor. However, fear of a massive recession continues to run rampant in the financial markets. Commerzbank’s economists expect the US economy to contract by 8 per cent in the spring quarter. This is likely to lead to a sharp reduction in jobs.

There are also signs of contraction in the eurozone as a result of the corona crisis. This can now also be seen in consumer sentiment. The buying mood of consumers in the eurozone deteriorated in March. The barometer for consumer confidence fell by 5.0 points to minus 11.6 points. However, this was even better than expected by experts.

The US stock markets were weaker again on Monday.

The Dow Jones already started the session with markdowns and slid even deeper as the day progressed. In the end, the index posted a loss of 3.12 per cent to 18,576.04 points. The NASDAQ Composite also remained below the zero line in Monday’s trading. It went down 0.27 per cent weaker at 6,860.67 units.

The corona crisis continued to weigh on the market: despite the active support of the US Federal Reserve, Wall Street was unable to post any gains on Monday. The Fed announced virtually unlimited bond purchases. This week alone, government bonds for 375 billion US dollars and mortgage securities for 250 billion US dollars are to be bought. But not only on Wall Street is to be helped, but US citizens are also to receive direct support.

These QE measures will, almost guaranteed, have a highly destructive effect on the US dollar once the crisis is over…

The trend in Southeast Asia was mixed. China’s stock markets fell significantly at the beginning of the week. Fear of the economic consequences of the Corona crises continues to drive investors. The CSI with the 300 most valuable stocks on the Chinese mainland stock exchanges fell by around 3 per cent, and in Hong Kong, the Hang Seng fell by more than 4 per cent.

In Japan, the Nikkei-225 leading index rose by around 2 per cent. However, it only made up part of the gains of the other indices on Friday. This was because trading in Japan had been suspended due to a holiday.

The Dax started deep in the red, shot above the 9,000 mark at midday and then closed clearly in the red. The Corona crisis continues to cause massive uncertainty among investors. At least the Dax shows a “relative strength” compared to Wall Street, which continues to be under pressure, and did not lose as much as its big brother.

After a Xetra closing about two per cent below Friday’s level, the Dax continued to gain in late trading and almost managed to jump above the 8,800 mark.

The euro exchange rate gave back some of its gains in late US currency trading on Monday. The European common currency, the euro, was last traded at USD 1.0730. At its peak, the euro had still risen to over 1.08 dollars. The European Central Bank (ECB) had previously set the reference rate at 1.0783 (Friday: 1.0707) dollars. In the night to Monday, the euro had at times fallen to 1.0636 dollars, its lowest level in three years.

Oil prices remained under pressure on Monday. In the afternoon, a barrel of North Sea Brent cost US$25.81. That was $1.16 less than on Friday. A barrel of the American type WTI last cost 22.39 dollars, 25 cents less than on Friday. According to traders, the economic consequences of the Corona crisis, in particular, are weighing on oil prices. According to estimates by traders in London, the demand for crude oil is likely to fall by up to 20 million barrels per day this year. The chances for an agreement between the producing countries Russia and Saudi Arabia have recently decreased further.

Gold investors, on the other hand, can cheer about rising prices again. The troy ounce of the precious metal is currently growing by a massive 3 .5 per cent to $1,551. With 800 to sometimes over 1000 pips, spreads for the precious metal are getting out of control across all Forex broker platforms due to liquidity issues, and most brokers are currently changing to a variable spreads model.

Cryptocurrencies are also appreciating again today. The number one digital asset Bitcoin increased by more than 8 per cent to $6,700. Ethereum gained over 7 per cent to $139 and XRP stands at $0.1620, a plus of almost 6 per cent.

Due to the coronavirus pandemic, the International Monetary Fund (IMF) expects the recession to be at least as severe as it was after the global financial crisis in 2008.

Next year, however, the global economy should recover, said IMF head Kristalina Georgieva on Monday. “The faster the virus is stopped, the faster and stronger the recovery will be.”

The IMF welcomed the aid packages of numerous states as well as the support measures of many central banks around the globe. Industrialized countries are in a better position than poorer countries that are struggling with a massive flight of capital. “Investors have already withdrawn 83 billion dollars from developing countries since the outbreak of the crisis.” The IMF will significantly increase its emergency financing. There have already been requests from nearly 80 countries.

The aerospace and defence company Airbus has cancelled its projections for the current year due to the coronavirus pandemic. In addition, the company announced on Monday in Toulouse that the dividend for the year 2019 will not be paid. With a new credit line of 15 billion euros, Airbus is also securing further liquidity and now has around 30 billion euros at its disposal.