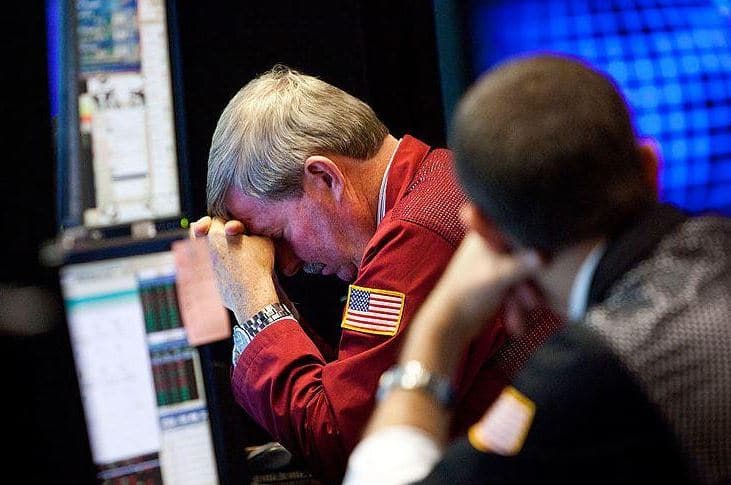 You could already guess it just before the weekend, but today, Monday, there was indeed panic on the market.

In the USA as well as on other international stock exchanges, the market went downhill hard today. With partly over 4 per cent losses, it was in some cases the most significant declines in one trading day since June 24, 2016, the day after the Brexit referendum.

Although many market observers recently expected the coronavirus crisis to worsen, when it was confirmed over the weekend and today, it was a shock. The further spread of the virus caused not only the European but also the US stock exchanges to crash. In Italy, more than 160 people are now infected with the virus – making Italy the country with the most infected people outside Asia. Because of the epidemic, the International Monetary Fund lowered its growth forecast.

On Wall Street, the start of the week saw a steep decline. After a very weak start, the Dow Jones fell back even further, ending Monday’s trading 3.56 per cent lower at 27,960.80 points. The tech stocks index NASDAQ Composite also posted enormous losses and closed with a loss of 3.71 per cent at 9,221.28 points.

Investors are now likely to increasingly rely on support measures by central banks – and on government bonds that are considered safe: Ten-year US bonds rose in early trading to their highest level since summer 2016.

Meanwhile, the yield curve in the USA has also inverted again, which is seen as a signal of recession. Yields in the USA have been under pressure since the end of last year.

Price losses due to the coronavirus shaped the picture on the Far Eastern stock markets at the beginning of the week. These were particularly severe on Monday in Seoul, South Korea, where the leading index Kospi fell by almost four per cent. The South Korean health authorities have reported two more deaths in connection with the novel virus. Also, the number of people infected with the pathogen increased by 161.

The CSI-300 index of mainland China recently lost 0.38 per cent to 4,133.54 points. The Hang Seng in Hong Kong lost significantly more with 1.63 per cent to 26,866.37 points and slid to its lowest level in almost three weeks. In Tokyo, no trading took place due to a public holiday.

Europe’s stock markets came under considerable pressure on Monday. The EuroSTOXX 50 was already clearly in the red in early trading and continued to fall during the trading day. It closed 4.01 per cent lower at 3,647.98 index units.

At the start of trading, the DAX had already fallen by around two and a half per cent and continued to fall – and in the day, it temporarily dropped below the 13,000 point line. In the end, the index posted a loss of 4.01 per cent to 13,035.24 points. The TecDAX also dropped at the opening and approached the 3,000 point mark with a significant drop in the day. It ended trading at 3,114.68 points, 3.78 per cent below its closing price on Friday.

Even a better than expected Ifo business climate index for Germany did not help because the latest survey was conducted before the coronavirus spread in Europe. According to the institute, the business climate surveyed by the institute rose by 0.1 points to 96.1 points. Analysts, however, had expected a decline.

The survey results point to the economic growth of 0.2 per cent in the first quarter. However, this hope is likely to be dashed by an increased spread of the coronavirus in Europe.

The euro exchange rate moved little on Monday after its rise in US trading. Shortly before the ringing of the closing bell on Wall Street, the common currency, the euro, costs 1.0846 US dollars. In early European trading, it had been trading just above the $1.08 mark. The European Central Bank (ECB) set the reference rate at 1.0818 (Friday: 1.0801) Dollar.

Oil prices came under intense selling pressure on Monday. The prices for both European and American crude oil fell by more than four per cent each due to economic concerns.

The biggest winner of the virus crisis today was the precious yellow metal. Fear of the economic consequences of the coronavirus epidemic drove more investors into the “safe haven” of gold. The price of the yellow precious metal rose to a peak of 1,688 dollars. For domestic investors, it was now more expensive than ever at 1,561 Euros.

The cryptocurrency market didn’t attract investors during today’s equities sell-off. Most of the currently most important digital assets lost between 1 and 8 per cent, for example, Bitcoin 1.8 per cent to $9,610, Ethereum 2.25 per cent to $262 and XRP 2.2 per cent to $0.27.

“The continuing spread of the coronavirus is increasing the risks for the luxury industry in the short term,” wrote analyst Zuzanna Pusz of the investment bank UBS. Above all, a related decline in international tourism is having a negative impact, as 43 per cent of the total industry turnover is the result of purchases by tourists.

The coronavirus epidemic is likely to cost the luxury goods industry billions in sales and profits. This is the result of a study by the consulting firm Boston Consulting Group (BCG), which asked 28 CEOs and CFOs of luxury brands for their assessment. According to the study, the virus could reduce sales by 30 to 40 billion euros and shrink profits by a total of around 10 billion euros.

In the worst case, a global pandemic, there could be a noticeable economic slowdown in Asia with repercussions for the entire global economy. In that case, luxury goods producers could be forced to reduce their production in Asia and close down factories and businesses in Asia.