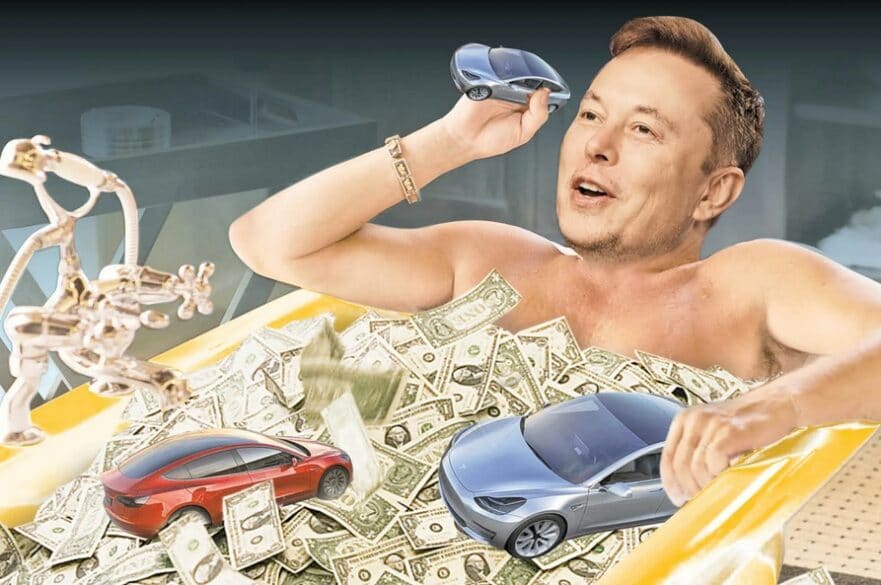 After a sluggish start, the US stock markets turned up and reached new highs. Tesla shares, in particular, were in demand, and the electric car manufacturer is now worth more than one trillion dollars for the first time.

Investors are looking ahead with optimism to the corporate reporting season, which will be in full swing in the coming days. The reports have been very promising so far, but whether the markets can carry the momentum further depends on whether the big tech companies are on board or not, according to various market analysts.

In the next few days, quarterly results are due from General Electric, UPS, Alphabet, Coca-Cola and McDonald’s, among others.

The US stock markets continued to advance at the start of the week. The Dow Jones opened marginally higher on Monday and then gained a little more. This was enough to set a new record in the course of trading. At the closing bell, the US index was up 0.18 per cent at 35,742.92 points. The tech index NASDAQ Composite also extended its initial gain and closed 0.90 per cent higher at 15,226.71 points. Buoyed by stellar gains from Tesla and PayPal, the broad-based S&P 500 climbed about 0.5 per cent to a new record high of 4,568 index points.

This week the quarterly reports of other major US tech companies are due. Numerous companies had already opened their books last week and were able to surprise positively.

The most important stock exchanges in Asia developed differently on Monday. In Japan, the Nikkei benchmark index closed with a loss of 0.71 per cent at 28,600.41 points. The upcoming parliamentary election caused restraint here. On the Shanghai stock exchange, the leading index Shanghai Composite rose by 0.76 per cent to 3,609.86 units by the end of trading, while the Hang Seng increased by 0.02 per cent to 26,132.03 index units on the Hong Kong Stock Exchange.

In China, the central bank increased the daily liquidity injection. Officials also announced further initiatives to introduce a property tax. However, there were indications that it would take at least five years before the authorities introduced a nationwide property tax, it was said. The topic of Evergrande remained quiet today.

The European stock exchanges hardly moved on Monday. The EuroSTOXX 50 started into the day with a small gain and only moved sideways as trading continued. It finally ended the session 0.01 per cent lower at 4,188.31 points.

The German stock market had a friendly start to the new week. The DAX 40 ultimately said goodbye with a gain of 0.36 per cent at 15,599.23 points, while the TecDAX finally moved up 0.80 per cent to 3,826.85 points after having risen somewhat initially.

Investors were waiting for impulses from the business figures due this week. Meanwhile, sobering news came from the economic side, including a significant drop in the German ifo index in October. The mood in the German economy has thus deteriorated. Continuing inflation concerns, as well as further rising corona positive figures, also weighed. On the corporate side, HSBC was in focus. It was able to surprise positively with its pre-tax profit.

After initial gains, the euro slipped into the red on the foreign exchange market. One euro was trading for 1.1613 dollars in the evening – a good 0.2 per cent less than the previous day. The ifo index report from Germany burdened the euro.

The Turkish lira remained under massive pressure at the beginning of the week. The currency fell to record lows against the euro and the dollar. After the unexpectedly sharp interest rate cut by the Turkish central bank on Thursday, a political aspect was added as an additional burdening factor: President Erdogan declared the ambassadors of Germany, the USA and eight other Western countries undesirables. In the evening, however, Erdogan rowed back.

The price of Brent oil from the North Sea climbed by up to 1.3 per cent to a three-year high of 86.60 dollars per barrel. The US oil price was even higher than it had been for about seven years and rose by 1.00 dollar to 84.73 dollars. The ongoing economic recovery is causing supply bottlenecks. In addition, Saudi Arabia is unwilling to increase its oil production despite the sharp rise in prices.

Gold was also in demand, becoming more attractive as an inflation hedge once again. Today, the price for the troy ounce of gold climbed by more than $13 to $1,807.

Cryptocurrencies remain in demand as well, with the overall market capitalization rising 3.42 per cent to $2.67 trillion. Bitcoin rose 3.2 per cent to $63,200, while smart contracts behemoth Ethereum climbed 3.5 per cent to $4,240 per coin. Binance Coin, XRP and Cardano gained around 1 per cent, while Solana added 6 per cent to $213, and Polkadot was rising 3.6 per cent to $44.33. Bigger gains of 8-11 per cent were seen for Shiba Inu, ChainLink, Avalanche, VeChain, Internet Computer and Algorand.

The business climate in Germany deteriorated more than expected in October, mainly due to weaker business expectations among companies. According to the results of its monthly survey, the Ifo Institute’s business climate index fell to 97.7 (September revised: 98.9) points. Surveyed economists had only forecast a decline to 98.0 points.

Economic activity in the USA continued to weaken in September. According to the Federal Reserve Bank of Chicago, the Chicago Fed National Activity Index (CFNAI) fell to a level of minus 0.13. Only when the value is below minus 0.35 does this mean that the economy is contracting. For August, the index reading was revised to plus 0.05 after initially citing a figure of plus 0.29. The more meaningful three-month moving average also deteriorated to plus 0.25 in September.