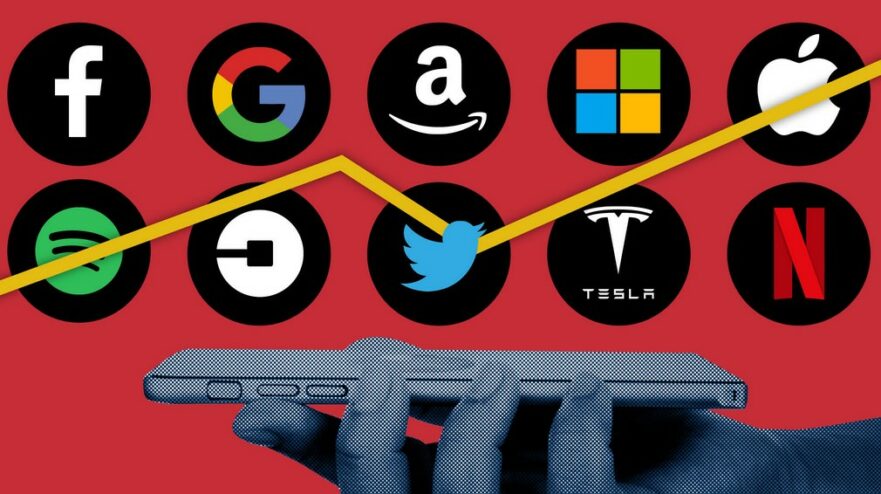 As market participants and investors get ready for big tech’s balance sheet reports, the US stock market indices moved in different directions. More weight has been put behind tech companies, and cyclical blue chips were sought after less.

Wall Street is eagerly awaiting the real highlight of the reporting season, the quarterly reports of the big tech companies. Tomorrow after the close of trading, Google parent Alphabet and Microsoft, among others, will present figures for the past quarter, followed by Apple and Facebook on Wednesday. Results are also expected from chip giants Texas Instruments on Tuesday and Qualcomm on Wednesday.

The US electric car manufacturer Tesla has already presented its figures for the first quarter, showing that it continued to post strong growth at the beginning of the year and achieved its highest quarterly profit to date. In the first three months to the end of March, tech billionaire Elon Musk’s company earned 438 million US dollars, as it announced on Monday after the US stock exchange closed. A year ago, the balance sheet had only shown a very slight plus of 16 million dollars.

In addition to the ongoing reporting season, the Fed’s FOMC interest rate committee meeting on Tuesday and Wednesday is another key topic of the week. Experts expect a continuation of the liquidity glut that the central bank pumps into the markets month after month as part of its ultra-loose monetary policy.

In the US, the vaccination campaign continues, yet the corona case numbers left investors worldwide with a conservative bias – especially given the already high valuations.

Meanwhile, in Japan and India, the wave of infection continued to soar, burdening the overall market sentiment.

The stock markets in the Far East trended mixed at the start of the week. The Japanese benchmark index Nikkei rose by 0.36 per cent to 29,126.23 points at the beginning of the week. In China, however, the situation looked worse, and the Shanghai Composite fell by 0.95 per cent to 3,441.17 points. Things did not look any better in Hong Kong either, where the Hang Seng ultimately lost 0.43 per cent to 28,952.83 index points.

While investors in Japan pushed the indices higher, the markets in China showed negative signs. The still rampant corona situation clouded the mood. Among individual stocks, the reporting season was the main driver.

Europe’s stock markets started the new week cautiously. The EuroSTOXX 50 started the session almost unchanged and continued to move in a narrow range around its closing price on Friday but was then able to gain 0.22 per cent to 4,022.36 units.

The DAX also posted a small gain of 0.11 per cent to 15,296.34 points on the Frankfurt Stock Exchange. The TecDAX finally presented itself 0.49 per cent higher at 3,536.04 units, after it had already started trading stronger.

The focus of investors is on individual stocks and figures from the reporting season until this week’s meeting of the US Federal Reserve. Meanwhile, the ifo business climate index in Germany developed somewhat worse than expected in April.

The euro exchange rate was able to make moderate gains again today in US trading. About an hour before the close on Wall Street, the common currency cost 1.2090 US dollars in forex trading. During the Asian trading session, the exchange rate had risen to 1.2117 dollars, its highest level since the end of February.

Oil prices fell slightly today. In commodity trading, a barrel of North Sea Brent cost 43 cents less than on Friday at 65.67 US dollars. The barrel price for WTI light oil fell by 25 cents to 61.89 dollars. Discussions on climate policy and the rising number of corona cases in Japan and India were cited as reasons for the price losses.

The gold price remained in a relatively clearly defined range today but ultimately gained a solid 5 US dollars to $1.781 per troy ounce.

The cryptocurrency market rose significantly today after consolidations within a narrow trading range of many digital assets were observed in the past few days. For example, Bitcoin gained 6.2 per cent to $53,700 and Ethereum 4.1 per cent to $2,515. XRP shot up 27 per cent to $1.40, and Cardano appreciated by over 9 per cent to $1.24

The mood in the executive suites in Germany was reported worse than expected in April, mainly due to less optimistic business expectations due to supply problems in the industry. The Ifo Business Climate Index expanded to 96.8 (March: 96.6) points, the Munich-based Ifo Institute reported after its monthly survey of around 9,000 managers. Economists surveyed by Dow Jones Newswires had expected an increase to 97.4 points.

The industry in the USA posted a relatively meagre increase in orders in March. Orders for durable goods such as aircraft and machinery rose only 0.5 per cent from the previous month, the Commerce Department reported on Monday. Economists had expected a much larger gain of 2.3 per cent, following a revised 0.9 per cent decline in February. The first estimate for February was for a decrease of 1.2 per cent. Experts believe that the world’s largest economy will grow strongly this year. One reason for this is the fast pace of vaccination, leading to the loosening of lockdown measures faster than elsewhere.

Last week, the European Central Bank (ECB) enormously expanded its emergency bond purchases to combat the consequences of the virus crisis. The monetary guardians purchased government bonds, corporate bonds and other securities with a net volume of €22.25 billion in the week ending 23 April as part of their PEPP pandemic purchase programme. This is the highest weekly volume since the end of June 2020 and an increase of more than a third compared to the previous week. During the last week, high redemptions of maturing bonds had even led to a decrease in net purchases.

In March, the ECB announced that its PEPP purchases in the second quarter would be significantly larger than in the first months of the year. In this way, it wants to ensure that financing conditions for states, companies and households in the euro area remain favourable.