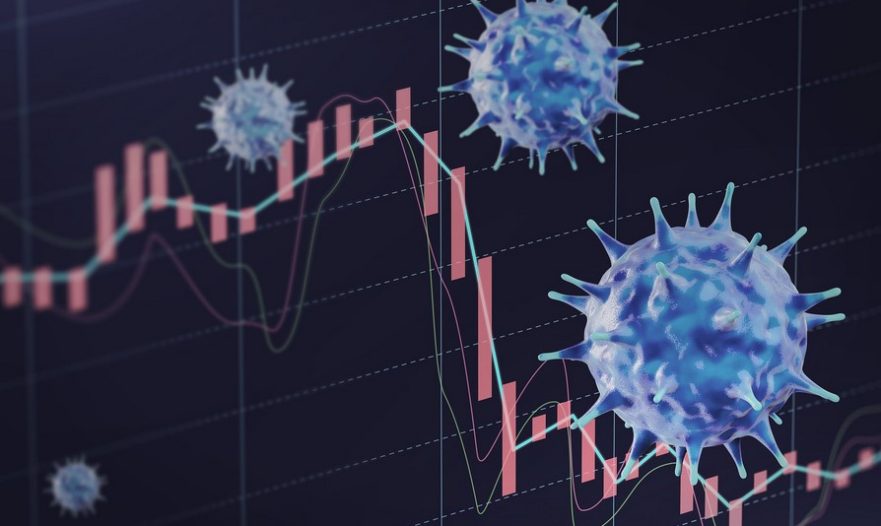 Next wave of pessimism

The increasing number of corona infections and the catastrophic figures of the Dax heavyweight SAP were reason enough to cause enormous damage to the markets today. All stock exchanges plummeted, especially energy shares, were hit hard.

The fact that Democrats and Republicans in America seem unable to reach an agreement on the next corona aid package also continues to depress sentiment.

Wall Street fell into deep red during the day.

The further rise in corona infections worldwide also depressed sentiment on Wall Street at the beginning of the week. Also, investors continued to look at developments regarding another US economic stimulus package. At the end of last week, there was still some hope that an aid package could be launched before the US elections in early November. Now Nancy Pelosi and US Treasury Secretary Steven Mnuchin broke off their talks, accusing each other of having “changed the rules of the negotiations” in retrospect.

The start of the new stock exchange week was disappointing in Asian trade. The Japanese leading index Nikkei ended trading marginally 0.09 per cent lower at 23,494.34 units.

Asia’s stock markets tended lighter at the beginning of the week. Caution was caused by the continuing rise in corona infection figures, the upcoming US presidential election and the US aid package, which is still pending.

Europe’s stock exchanges presented desolate results at the start of the week. The EuroSTOXX 50 fell 2.93 per cent and closed at 3,105.25 points.

The index heavyweight SAP, of all companies, was the main reason for the biggest daily loss in the Dax for more than a month. After surprisingly weak quarterly figures for the software company, the index dropped sharply, closing 3.7 points lower at 12,177. The TecDAX also recorded strong losses and ended the day 3.59 per cent lower at 2,920.19 index units.

The mood is currently heavily depressed because of the ever-increasing corona infection figures and the way the media and governments portrait them.

At the beginning of the week, the US dollar strengthened against many currencies, putting pressure on the euro. The American currency remained in demand on the Forex market because of the high level of uncertainty on the financial markets. The euro is currently trading at 1.1818 US dollars, having fallen as low as $1.1803 earlier today.

The commodity markets are also expected to be gloomy at the beginning of the week. Cyclically sensitive oil prices also extended their losses in the afternoon. Prices for US WTI and North Sea Brent fell by well over 2 per cent each. The price of Brent oil is now only 40.49 US dollars, while WTI oil is trading at $38.59 per barrel.

The rising risk aversion is benefiting the gold price. The price of the precious yellow metal rose by a good 0.3 per cent to 1,905 US dollars per troy ounce.

The renewed sell-everything attitude hit cryptocurrencies, and most digital assets fell in value. Only Bitcoin held firm and even increased by 0.5 per cent to $13,100. Ethereum, XRP and Bitcoin Cash, on the other hand, declined by 2.5 to 3.5 per cent.

The German Ifo index for October ended its five-month recovery phase today and fell back slightly for the first time due to corona. The index for October fell from 93.2 points to 92.7 points, as the Munich research institute explained on Monday.

Surprisingly weaker house sales in the USA did not detract from the strength of the dollar. In October, new home sales had fallen by 3.5 per cent, while experts had expected a plus of 1.4 per cent. The real estate market in America has so far proved to be surprisingly robust and defied the crisis – it was the first weaker figure from this sector in a long time.

Bayer is strengthening its pharmaceutical business with a billion-dollar acquisition in the US. According to its announcement, the DAX group is taking over Asklepios Biopharmaceutical Inc for up to 4 billion US dollars. The North Carolina-based company specialises in research, development and production of gene therapies in various therapeutic areas.

Asklepios Biopharmaceutical is to be continued as an independent company. The US company has nothing to do with the clinic operator Asklepios, which operates mainly in Germany.

The Bayer share initially moved into red territory in early XETRA trading on Monday, but then turned positive in the morning, at times rising 0.95 per cent to 42.83 euros.

Germany’s most valuable stock exchange group, SAP, has surprisingly capped its annual targets and is no longer interested in a recently announced profitability pledge for the coming years.

This year, SAP now expects total revenue of only 27.2 to 27.8 billion euros based on constant exchange rates – that is, at last year’s exchange rates. If the strong euro has a particularly severe impact on the translation of foreign revenues, figures below this are possible, according to the information provided. In the financial forecast updated in April, 27.8 to 28.5 billion euros had been targeted, before that even 29 billion euros.

Following the reduced annual targets and SAP’s gloomy medium-term outlook, the shares of the software group went under on Monday. At the opening of the XETRA, they fell by almost 21 per cent to €98.88, their lowest level since April. By the close of trading, SAP shares had fallen 21.94 per cent to €97.50. This is also the highest daily loss of SAP’s shares since 1999 and corresponds to a destroyed stock market value of around 27 billion euros and a drop of 271 DAX points. SAP shares are thus almost solely responsible for the entire DAX loss today.

According to a newspaper report, Volkswagen is placing the luxury car brand Bentley under the control of Audi from next year. This is reported by the “Automobilwoche” regarding corporate groups. Up to now, the responsibility for Bentley was in the VW group board of directors with Porsche boss Oliver Blume. Bentley is now to be more closely linked with Audi. For example, the “Artemis” project that has just been launched in Ingolstadt could also supply the kit for an off-road saloon for the new Audi subsidiary.