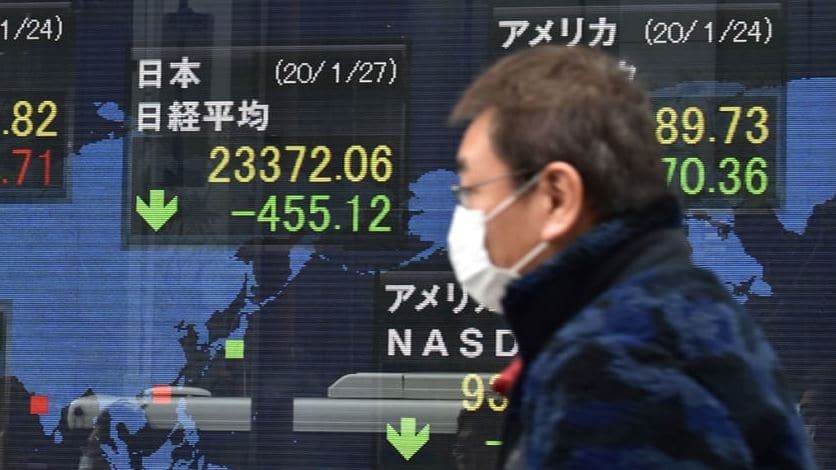 The financial markets are reacting more and more nervous about the threat of a pandemic.

Unlike on Friday, investors were not easily reassured by the Chinese government’s rigorous measures against the coronavirus. It seems that the virus has spread further and infected more people than previously thought. Fears of a continued spread of the coronavirus and noticeable consequences for the economy dominated the markets worldwide.

By Monday morning almost 2,800 infections with the virus ‘2019-nCoV’ originating in China had been confirmed worldwide. The number of deaths rose to 81 “If the spread of the virus is confirmed in other countries, this would be the next stage of escalation,” said analyst Jochen Stanzl of CMC Markets. Contradictory (often probably false and manipulative) information from social media and official Chinese announcements caused further unrest.

The fear of a spread of the coronavirus and its economic consequences has given Wall Street a weak start to the week. The Dow Jones Industrial dropped to its lowest level in three weeks in early Monday trading, and then closed above daily lows with a 1.6 per cent drop to 28,535 points.

The market-wide S&P 500 recorded its most substantial daily loss since the beginning of October and ultimately also lost 1.6 per cent to 3,243 points. The technology-driven Nasdaq 100 lost 2.1 per cent to 8,952 points.

Investors played it safe: US ten-year government bonds rose to their highest level since the beginning of October. “The risk parameters give a clear indication of investors’ reaction to the outbreak of the lung disease,” explained some market participants, also pointing to gains in gold and US dollar quotations as “safe havens” in uncertain times.

From a corporate sector perspective, shares from the travel and leisure sector were under particular selling pressure. American Airlines and United Airlines each lost more than five per cent. The shares of cruise operator Royal Caribbean Cruises fell by 7.6 per cent. The shares of the hotel and casino operators MGM Resorts and Las Vegas Sands fell by almost four and almost seven per cent respectively.

The spread of the coronavirus depressed prices on Japan’s stock exchanges. The Nikkei 225 fell by more than two per cent to 23,343.51 index points. On most Asian stock exchanges, such as in China and Hong Kong, there was no trading due to a public holiday. On the futures markets, however, many Chinese shares fell.

European stock markets closed the first trading day of the week significantly lower. The EuroSTOXX 50 started in the red and continued to fall afterwards. Overall, the EuroSTOXX 50 lost 2.68 per cent and closed at 3,677 points.

The Dax 30 already lost ground at the start of trading and fell more sharply as trading progressed. At the end of Xetra trading, the leading index was 2.74 per cent lower at 13,204.77 points. The TecDAX also opened weaker and closed the session on red territory.

As always in times of crisis, safe havens such as German Government securities or gold were/are in demand among asset classes. The price of the precious yellow metal is currently quoted at a high level of USD 1,582 per troy ounce. US government bonds are also in demand, and the Swiss franc is in strong demand. This is pushing the euro down to 1.0692 francs – the lowest level in almost three years.

Volkswagen and Microsoft are further expanding their strategic partnership. The carmaker has so far been cooperating with the software group to network its cars in the “Volkswagen Automotive Cloud fully”. In the future, the long-term cooperation will also include sustainability, digital education and employee commitment, the companies declared on Monday.

“Climate protection and digital transformation are the key issues for the future of business and society”, said Ralf Pfitzner, Head of Sustainability in the Volkswagen Group. Microsoft will offer a digital training programme at Volkswagen’s “Faculty 73”. The aim is to train both VW employees and external job seekers for the digital labour market.

VW aims to be able to produce the most important components of the new generation of cars – batteries and software – itself. “We have to build up sustainable expertise here,” boss Herbert Diess recently told employees.

Contrary to expectations, the mood in the top echelons of the German economy clouded over somewhat in January, due to developments in the service sector and the construction industry.

The ifo business climate index fell to 95.9 (December: 96.3) points, according to the Munich-based ifo Institute in its monthly survey of around 9,000 managers. This was the first decline since August 2019.

The index for assessing the current situation of the companies surveyed rose to 99.1 (98.8) points. Economists had predicted 99.3 points. In contrast, the index for business expectations fell to 92.9 (revised 93.9) points. An increase to 94.9 points had been expected. The preliminary December value had been 93.8 points.