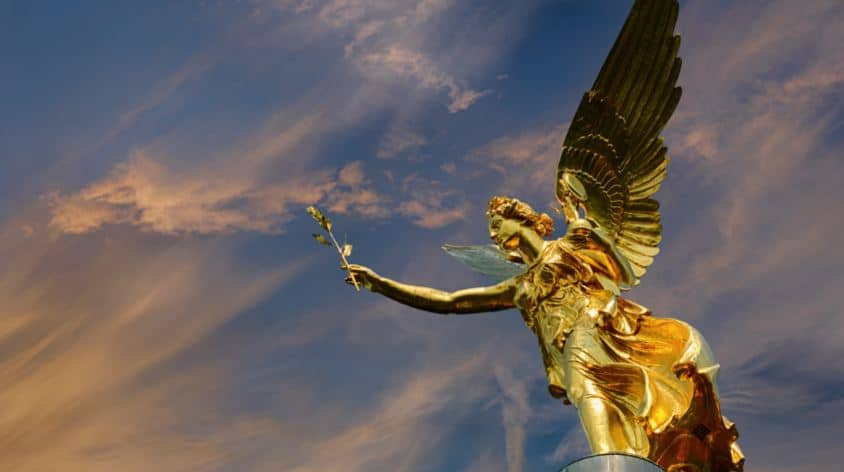 There was nothing really new to report at the stock exchanges today. Also, the fact that gold reached a new all-time high today is not that surprising given everything that’s been happening in the markets this year.

Investors on Wall Street are hoping for a new billion-dollar corona aid package. Details are eagerly awaited, and the Republicans planned to present their proposal later today. According to a report, they want to cut weekly unemployment benefits significantly until a new income-based system comes into effect. The topic lets the consular dispute between the US and China, as well as the rising corona infections, fade into the background – at least for today. Investors were also noticeably reluctant to place any aggressive positions before the eagerly awaited quarterly figures of US tech giants such as Apple and Amazon.

Wall Street was friendly on Monday after an initially hesitant start.

The Dow Jones started with little momentum at first, but over the day turned positive and closed 0.44 per cent higher at 26,586.15 points. The NASDAQ Composite technology index posted more significant increases and ended the day with a gain of 1.67 per cent at 10,536.27 points.

The heightened tensions between the USA and China nevertheless remained in the back of investors heads as did the number of new corona infections, which had risen further in the USA. On Wednesday, the next monetary policy decision by the Fed will be on the agenda.

Investors on the Asian stock exchanges held back on Monday. The focus continues to be on the tensions between the USA and China, the increasing number of corona cases worldwide.

The Japanese leading index, the Nikkei 225, held steady after a long weekend at plus 0.03%. In China, the CSI 300 on the Chinese mainland exchanges, rose moderately, while the Hang Seng in Hong Kong fell slightly.

The EuroSTOXX 50 remained almost unchanged on Monday. At the end of a quiet trading day, the index closed at 3.302 points, 0.24 per cent lower than on Friday.

In Germany, too, the Dax 30 closed almost unchanged on Monday at just under 12,839 points. At times it had risen to 12,909 points but then had to give up some of its gains. The better-than-expected Ifo Business Climate Index was only able to support the leading German index temporarily. The mood of German companies brightened in July for the third month in a row.

At the beginning of the week, the German market initially revolved around the most valuable company in the Dax: SAP. Europe’s largest software manufacturer earned significantly more in the second quarter. “More than ever before, the pandemic has made it clear that digitalization is no longer an option but an absolute necessity to master difficult times,” said CEO Christian Klein.

On the foreign exchange market, however, there was again a lot of movement. The euro exchange rate continued its recent rally and, for the first time since September 2018, the common currency traded above the 1.17 US dollar level. Most recently, 1.1750 US dollars was paid, with a peak of as much as USD 1.1781.

Oil prices on the commodities market fell on Monday. North Sea Brent crude lost 76 cents per barrel and cost 42.58 US dollars at last count. The price of the American variety West Texas Intermediate (WTI) fell by 60 cents to $40.67 per barrel.

In contrast, the gold price rally continued at the beginning of the week with the precious yellow metal reaching a new all-time-high at almost $1,946. Several experts believe that the gold rally will continue and that the safe-haven metal will soon break the $2,000 mark. Calculated in euros, the gold price has long since reached new heights.

Another rally that continued as well is the rise in digital asset values. Bitcoin broke through its strong resistance and the critical psychological barrier of $10,000 and currently costs $10,800 – a gain of over 6 per cent on the daily. The number two cryptocurrency Ethereum was not able to follow its big brother and gave up 2.3 per cent to $315 today. Ethereum rallied over 33 per cent in the last seven days and was ready to take a breather. The third-biggest digital asset by market capitalization, XRP, enjoyed another increase of more than 2 per cent to now $0.2218. The biggest gainer of the top ten cryptos was Litecoin today, with a gain of 9.09 per cent to $52.98.

The Adidas rival Under Armour and its top management must be prepared for legal consequences following allegations of accounting fraud. The US Securities and Exchange Commission (SEC) has already prepared Group CEO Kevin Plank and CFO David Bergman for legal consequences last week, as the company disclosed in a mandatory announcement on Monday.

The authority sent out a so-called Wells Notice, which is a warning of impending penalties. This allows corporations to comment on allegations before the SEC makes a final decision on legal action. Under Armour is suspected of having artificially inflated its sales volume through accounting tricks.

The sporting goods manufacturer had already admitted to investigations in November and assured the authorities of its full cooperation. “In July 2017, the company began to respond to requests for documents and information, mainly relating to its accounting and related disclosures,” it was said at the time. However, Under Armour was not aware of any blame.

Under Armour’s share price presented itself unimpressed on the NYSE and was even up 1.37 per cent at $11.07.

Worst quarter in history of Ryanair

The collapse of air traffic during the corona crisis has not pulled Europe’s largest low-cost carrier Ryanair into the red as deeply as feared in the past quarter. The bottom line was a loss of 185 million euros in the first quarter up to the end of June – after a profit of 243 million euros a year earlier. Turnover dropped by 95 per cent to 125 million euros. The number of passengers even fell by 99 per cent to half a million. The quarter was the most difficult in Ryanair’s 35-year history, the company announced. Ryanair did not dare to make a profit forecast.

The scandal-ridden retail giant Steinhoff wants to settle the billion-euro lawsuits of shareholders and partners with a settlement. The South African company with German roots is offering a total of around 850 million euros in cash and shares in the African retail subsidiary Pepkor. Two and a half years ago, Steinhoff admitted that more than six billion euros were missing from the balance sheet. As a result, the share plunged into the abyss and today costs only five cents on the SDax.