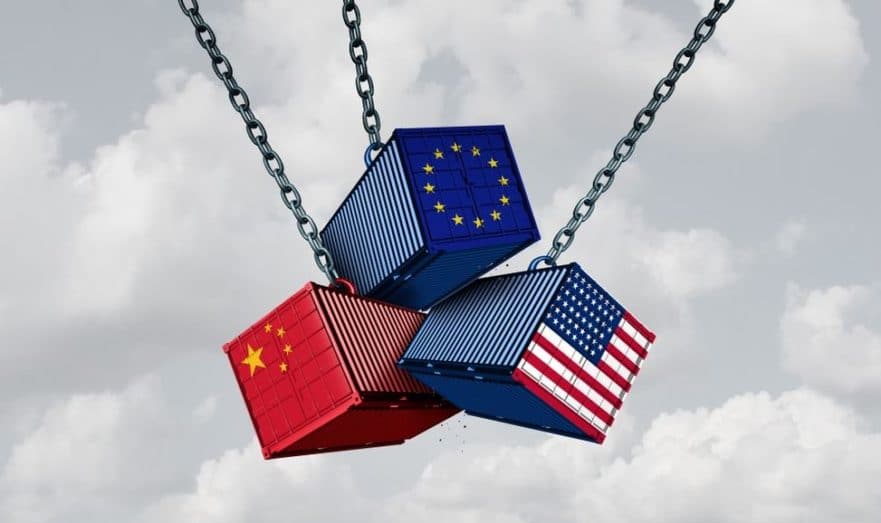 Last Friday, it all looked like a happy ending to a gloomy week on the stock market. Geopolitical relaxation signals drove the recovery tour in the Dax. But then US President Donald Trump caused unrest on the New York Stock Exchange once again.

While Europe’s stock markets went into the weekend with price gains, Wall Street turned negative in the evening. The Dow lost around 0.5 per cent two hours before the close of trading, while the broader S&P 500 lost 0.6 per cent. For the technology exchange Nasdaq it was even down by 1.1 per cent. Chinese stocks listed on the New York Stock Exchange in particular fell.

According to insiders, the US government is considering discontinuing the listing of Chinese companies in the USA. Such a move would be part of a larger effort to curb Chinese investment in the US, an insider said. It could also limit American pension funds’ exposure to Chinese markets. Such measures are likely to fuel the trade dispute between the two major economic powers. Trump would have to approve the project in the end. However, he has already given the go-ahead for discussions on the issue.

The ongoing discussion about a possible impeachment of Donald Trump is also creating uncertainty. In the Ukraine affair over possible abuse of power by the US President, Trump wants to find leaks in the White House and bring those responsible to account. Meanwhile, his opponents see themselves strengthened on the way to a possible impeachment proceedings against the Republican. The complaint submitted by the anonymous whistleblower about Trump and his controversial telephone conversation with the Ukrainian president contains important clues for investigations against the president.

On the other hand, there were also geopolitical signals of relaxation. In the run-up to further talks in October, the USA and China nourished hopes of progress in the trade dispute. This was countered by speculation that the Huawei sanctions would be reintroduced. Reports of a limited ceasefire in parts of Yemen, a country divided by civil war, and an alleged offer by the USA to lift sanctions against Iran made investors confident.

At the end of the week, the US labour market report for September will receive unrestricted attention. It is crucial for the markets whether wage dynamics continue to pick up given the very low unemployment rate.

The US Federal Reserve (Fed) is aligning its monetary policy strongly with the US economy and the development of employment. Low interest rates are regarded as one of the most important driving forces for the stock markets, as they favour equities over fixed-interest securities.

Most Asian stock markets are starting weaker on Monday.

The trade conflict between the USA and China is not letting investors go. China wants to send a high-ranking representative to Washington in October, but a precise date has not yet been announced. Additional uncertainty is caused by reports that the US government is considering making access to US capital more difficult for Chinese companies.

The European stock markets are quite friendly on Monday morning. The EuroSTOXX 50 had already gone higher and is currently able to hold its gains. It closed 0.4 per cent higher at 3,241.86 points.

In the Asian currency markets, the Euro is barely moving against the Dollar. Currently, the European single currency is trading at 1.0937 dollars, slightly above its two-year low marked last week.

Oil prices are trending sideways in early trading. Most recently, media reports of the rapid progress of oil plant repairs in Saudi Arabia after the attack in mid-September had depressed prices for Brent and WTI.

Gold continues to move away from the psychologically significant $1,500 mark it had already had to reveal on Friday. The troy ounce of gold is currently trading at $1,493.

On the cryptocurrency markets continue to look sour. Bitcoin is falling under the $8,000 mark and is currently trading at $7,800, a minus of almost 4 per cent. Similarly, Ethereum dropped another 2,68 per cent to just $167, and Bitcoin Cash fell by nearly 4 per cent to just below $217.

The only digital asset not being hit as hard is currently XRP. One XRP is still trading for approximately $0.2410. Has the time come where we see Bitcoin losing his long-held crypto-throne?

Is the Bank of England cutting interest rates?

Speculation that the Bank of England will lower interest rates in the near future is pounding the pound. The British currency will fall by up to 0.4 per cent to 1.2269 dollars. Statements by central banker Michael Saunders triggered the sales. He talked about lowering interest rates, even if a chaotic Brexit could be averted, as the uncertainty would affect the British economy for the foreseeable future.

Online bank N26 is in no hurry

The German smartphone bank N26, founded by the two Austrians Valentin Stalf and Maximilian Tayenthal, aims to grow strongly internationally before going public. “This will be an issue in three to five years at the earliest. Maybe it will take eight years,” said Stalf. The N26 CEO and co-owner Stalf is not targeting the takeover by a major bank. “A sale is not an issue. You can see that in the investor structure.” The bank’s investors include Allianz and the Chinese Internet group Tencent.

The luxury goods group Richemont acquires the Italian jeweller Buccellati. The seller is the Chinese group Gangtai. The transaction has already been completed and will not have a significant impact on the financial statements. The Chinese group had bought the Milan-based jewellery manufacturer, which had existed since 1919, only a few years ago. However, the restrictions imposed by the Chinese government on foreign investments caused difficulties for the business, according to media reports.

IT service provider SoftwareOne plans to celebrate its IPO on the Swiss stock exchange. The offer to the investors will probably only include existing shares of the previous owners. As a rule, it takes around four weeks from this official announcement to the initial listing. According to earlier statements by insiders, SoftwareOne is targeting a market capitalization of four billion Swiss francs. One to CHF 1.5 billion of this is to be placed via the IPO. According to SoftwareOne, it is the world’s largest reseller of Microsoft products. The company with around 5400 employees also sells software from Symnatec, SAP, IBM, Oracle and many others.