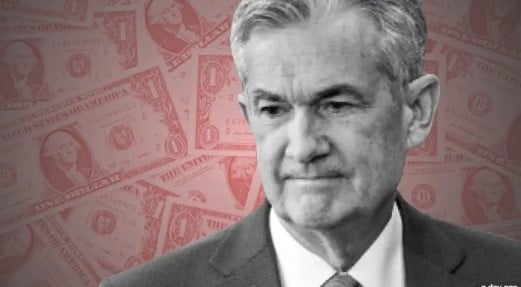 The US Federal Reserve has delivered the expected rate cut – but nothing more. Yesterday this put heavy pressure on prices on Wall Street and Nasdaq. In Germany, the Dax must now prove itself.

After the first rate cut by the US Federal Reserve in more than ten years to the new range of 2.0 to 2.25 per cent, American stock markets fell yesterday. The Dow Jones index lost 1.2 per cent by the close of trading and reached 26,864 points. The broader S&P 500 fell 1.1 per cent to 2,980 points. Both indices thus recorded their highest daily loss since 31 May. The composite index of the technology exchange Nasdaq lost 1.2 per cent to 8,175 points.

However, the central bankers had hardly had a chance to positively surprise investors and disappointed the minority, which had opted for a reduction of half a percentage point, wrote Thomas Altmann of asset manager QC Partners. In addition, the highest number of dissenters during the term of office of Fed Chairman Jerome Powell made “further interest rate cuts not a self runner”. Two of the ten members of the Fed’s Open Market Committee had voted against the majority for unchanged interest rates.

In pre-market trading, the indications on the Dax are in the range of 12,178 points, 0.1 per cent lower than yesterday. The Japanese stock market is also only slightly down today. The 225 value Nikkei index dropped 0.1 per cent to 21,494 points shortly before the close of trading. On the foreign exchange market, the euro again lost significantly during the night and is now trading at only around 1.1040 US dollars.

New talks in the trade dispute

The news that the talks in the US-Chinese trade dispute are to be continued in September had led to a slight easing of the situation in the afternoon. Before that, however, US President Donald Trump had attacked the government via the short news service Twitter, thus also burdening the financial markets.

The Dow Jones Index in New York was unable to continue working its way up to the close of trading. However, several good quarterly figures from US companies are supporting the US markets. First and foremost, iPhone manufacturer Apple sent a signal to the tech industry with a better-than-expected quarterly balance sheet. The share is trading with significant gains. The company has thus again reached a market value of one trillion euros.

The Eurozone is also showing signs of a sluggish economy. The gross domestic product (GDP) in the second quarter grew by 0.2 per cent compared to the previous quarter, the statistical office Eurostat announced on Wednesday. At the beginning of the year, economic output in the common currency area had grown twice as strongly by 0.4 per cent.

Oil prices, on the other hand, are clearly in forwarding gear. A barrel of Brent from the North Sea currently costs 65.15 dollars, an increase of about one per cent on Tuesday. Crude oil stocks in the USA fell significantly again last week. Inventories decreased by 8.5 million barrels to 436.5 million barrels, as the US Department of Energy announced in Washington on Wednesday. Analysts had only expected a decline of 2.8 million barrels. Already in the previous week, the stocks had fallen by 10.8 million barrels.

Spotify fights against the free trend

The music streaming market leader is attracting more and more customers. But only less than half pays for the service. The stock market doesn’t like that at all. The stock gets out of sync on Wednesday.

The subscription customers are essential for Spotify because they account for around 90 per cent of the total turnover of the streaming service. Accordingly, analysts and industry observers take a close look at how the number of paying customers is developing.

In the second quarter, the figure was disappointing. From April to the end of June, Spotify was only able to gain eight million new subscription customers and now has 108 million paying users. This is one million less than the music streaming service itself had aimed for. And also less than experts had hoped.

Most Spotify users still access the free version of the service with advertising and limited functionality. The total number of users rose from 217 to 232 million within three months. This exceeded Spotify’s forecasts.

The company confessed on Wednesday that the reason for the missed target among subscription customers was its own mistakes and not a weakness of the market. For the fourth quarter, Spotify wants to have up to 125 million paying users.

Spotify recently invested heavily in the expansion of its podcast offering. This is having an effect: the number of podcast users has risen by 50 per cent within three months and has doubled since the beginning of the year.

The Spotify shares lose a good two per cent in pre-trade US trading. On a one-year basis, stocks have lost a good eleven per cent, but have recovered somewhat this year. Since the brilliant IPO at the beginning of April 2018, however, the shares have made hardly any progress.

Spotify is the clear number one in music streaming, followed by Apple Music with a good 60 million subscription customers. The iPhone group is foregoing a free version of its service.

Aston Martin slips into the red

A loss in the first half of the year sent the shares of the British luxury car manufacturer Aston Martin on a downward spiral. On Wednesday, the shares fell by 22 per cent to a record low of 440.50 pence. In the six months to the end of June, the company, which became famous worldwide for its James Bond films, recorded a pre-tax loss of the equivalent of 86 million euros. Especially in Europe, the Middle East and Africa things went badly. “Aston Martin’s latest figures are nothing but a disaster,” said Michael Hewson, an analyst at brokerage firm CMC Markets.

At the recently merged eyewear group EssilorLuxottica, the signs are still pointing to a takeover. The planned acquisition of the Dutch optics retailer GrandVision, which also includes the Apollo-Optik chain, is a decisive step further. The two companies agreed on a purchase price of 7.3 billion euros. This was announced by the EssilorLuxottica management on Wednesday.

The eyewear group intends to acquire a total of 76.72 per cent of the Dutch company. EssilorLuxottica will pay 28 euros per share if the takeover does not take place within the next twelve months, even a little more.

Credit Suisse Much Better Than Expected

Cost reductions led to a jump in Credit Suisse’s profits in the second quarter. The major Swiss bank increased its net income by 45 per cent to CHF 937 million. According to a survey conducted by the bank, analysts themselves expected a profit of CHF 788 million. Also, the bank confirmed its profit target for the full year, which many analysts regard as ambitious. For 2019, Credit Suisse is targeting a return on equity of ten to eleven per cent (2018: 5.5 per cent). This corresponds to a profit of at least CHF 3.7 billion.

The chip group Qualcomm has disappointed the stock market with its outlook for the current quarter. The share lost more than five per cent in post-market trading. Among other things, Qualcomm pointed to weaker demand for LTE devices due to the imminent transition to 5G technology.

The Group expects revenues of between $4.3 billion and $5.1 billion for the fourth quarter, which runs until the end of September – a decline of up to 26 per cent year-on-year. Qualcomm expects earnings per share of up to $0.75, while analysts had expected more than a dollar.

The online fashion retailer Zalando is even more optimistic for the year as a whole than before. Adjusted operating earnings (EBIT) improved in the second quarter from EUR 94 million to EUR 101.7 million. This exceeded analysts’ expectations. Revenues rose by one fifth to just under EUR 1.6 billion, which is in line with forecasts. The Group raised its annual estimates slightly. Zalando now expects adjusted EBIT to be in the upper half of the EUR 175 to 225 million range. The sales increase is expected to be around the lower end of the range of 20 to 25 per cent.