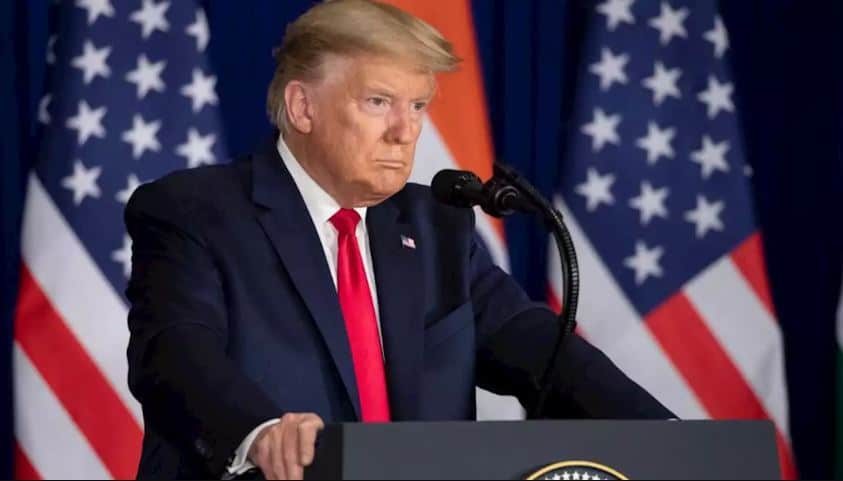 Caught between good and bad

On the one hand, the situation in Thursday trading eased, as Trump said that a solution to the price war between Saudi Arabia and Russia could soon be found. The Kreml, however, rejected Trump’s statement that Russia and Saudi Arabia would cut back their production.

On the other hand, the coronavirus is reported to continue to spread vigorously in the USA. In addition, the initial US applications for unemployment benefits had recorded yet another dramatic increase.

As a mediator between the two conflict parties Saudi Arabia and Russia, Donald Trump stirred up hopes for a cut in oil production and thus drove oil prices but also the stock market.

The Dow Jones was in the red when the starting bell sounded and then set off in search of direction. After multiple ups and downs, it recorded an increase in the evening. At the end of trading, it gained 2.24 per cent to 21,413.44 points. The Nasdaq Composite also opened lower and was initially undecided. After initial losses, it finally climbed by 1.72 per cent to 7,487.31 points.

The major Asian indices did not find a common direction on Thursday. In Japan, the Nikkei dropped 1.37 per cent to 17,818.72 points by the end of trading.

European stock markets were undecided on Thursday. The EuroSTOXX 50 was able to gain at the start of trading but had to give up its gains in the day before it finally started to rise again. In the end, it finally closed trading 0.31 per cent higher at 2,688.49 index points.

In the wake of friendly Wall Street and the easing on the oil market, European stock markets turned positive. The Dax was up 0.3 per cent, with gains at times even higher. In the morning, the leading German index had slipped to as low as 9,337 points.

The dominant theme continued to be the spread of the coronavirus. In Europe, there are signs of an improvement in the situation. However, the mood can change quickly in these times as we know.

The euro remained under heavy pressure on Thursday on concerns over the Corona crisis. Bad news regarding the global economy depressed sentiment in the financial markets, which benefited the US dollar as the most important global currency and a safe haven. Following the crisis low in March, the euro exchange rate once again fell well below the USD 1.09 mark. The European Central Bank set the excahnge rate at 1.0906 (Wednesday: 1.0936) Dollar.

According to Trump, oil prices have risen significantly. The price for a barrel of North Sea Brent for delivery in June jumped briefly to USD 36.29. Most recently, however, the price fell back to $30.32. However, this is still USD 5.58 more than on Wednesday. The price of a barrel of US WTI climbed by USD 5.04 to USD 25.34. For a short time, it had risen to $27.39. Above all, the denial from Russia is likely to have somewhat dampened the euphoria on the markets. Reports from China also supported oil prices. The news agency Bloomberg reported that the country wants to use the current low oil prices to increase the state oil reserves, citing informed circles.

The gold price was again able to increase significantly today and rose clearly above the $ 1,600 mark. Above all, the devastating labour market data from the USA drove the price from $1,582 to $1,615 this evening.

Cryptocurrencies are also strengthening further. Bitcoin rose over 3 per cent to currently $6,700 while Ethereum increased by more than 5 per cent to now $141 and XRP recording gains of 2.3 per cent to $0.1780.

Grave consequences of the virus crisis have recently become apparent in international job markets. In Spain, the country in Europe most affected by the virus crisis besides Italy, the number of applications for unemployment benefits rose more than ever before in March due to the economic consequences.

A similar trend was also reported from the USA. The reported number of 6.65 million initial applications for unemployment assistance meant a doubling of the previous week when the figure had already reached record levels. Current order data from US industry dated from February and thus even before the crisis in the USA worsened.

All restaurants operated by Vapiano SE remained closed for the time being due to the corona crisis, it was said. But German and international franchisees are not directly affected by the insolvency of Vapiano SE. Vapiano SE runs 230 restaurants worldwide, in Germany 55.

The company had already announced on 20th March that it was insolvent and explained that this had happened because of the drastic decrease in turnover and income. At the same time, the company had made an “urgent appeal to the German government for the rapid implementation of economic aid in the Covid 19 crisis”. In doing so, the management board hoped to be able to avert the insolvency application within three weeks.

For years, the chain’s business flourished, but as it expanded, the company overreached itself. Many new restaurants became loss-makers. Besides, competitors such as L’Osteria became stronger – this chain relies on table service, whereas with Vapiano, guests have to order and pick up the food themselves at the counter.

The Vapiano share was in a downward spiral on Thursday: By the end of trading on XETRA, it had fallen by 68.89 per cent to 0.28 euros.

MVV has a new major shareholder

The Australian asset manager First State becomes the new major shareholder of the Mannheim regional utility MVV. It will take over the two share packages from EnBW and RheinEnergie, which together account for 45.1 per cent of the total share capital. The City of Mannheim remains MVV’s majority shareholder. The Lord Mayor of Mannheim, Peter Kurz, welcomed the entry of the new owner as an “important milestone”: First State supported MVV’s course towards shaping the energy turnaround. First State is paying Euro 753 million for the two share packages. This amounts to Euro 25.34 per share. The share is currently quoted at Euro 26.20.