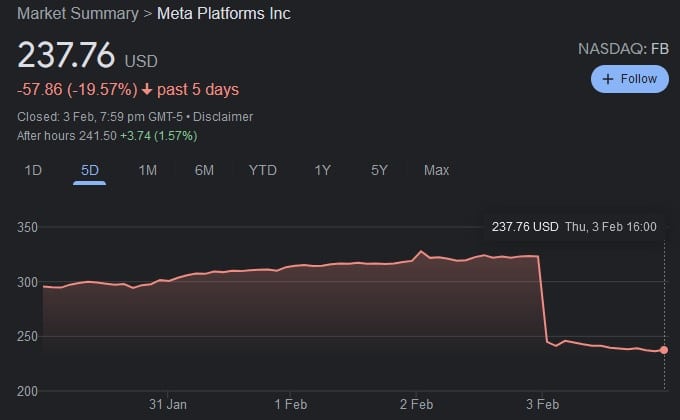 When one of the “big techs” weakens, the stock markets crash. Today, for example, Facebook’s record drop in share price sent shock waves through Wall Street. In the Corona pandemic, Apple, Amazon, Facebook, Microsoft and Netflix were among the big winners. Now, however, the phalanx of the “BigTechs” is crumbling.

After sobering figures from Netflix last week, Facebook is also no longer able to meet the high expectations. The online communication platform is hardly growing anymore and is suffering from TikTok competition. Weak figures and a gloomy outlook dragged the share price of Facebook parent company Meta down by 26 per cent. Meta lost a good 250 billion dollars in stock market value within one day. Never before has a listed company lost so much money in one day.

In addition to Facebook, the European Central Bank (ECB) also hit the markets. The monetary watchdogs hint at an imminent end to the flood of cheap money. The central bank presented a roadmap for curbing securities purchases. Moreover, ECB chief Christine Lagarde refrained from repeating earlier statements according to which interest rate hikes are unlikely in 2022. In doing so, she ultimately opened the door a little for a first rate hike, according to some market observers.

The Facebook shock shook Wall Street. After four winning days in a row, the Dow Jones fell by almost 1.5 per cent to 35,110.34 points. The Nasdaq 100 ended its recent rally and fell by 3.74 per cent to 13,878.82 index units. In the wake of Facebook, the stocks of Snap, Pinterest and Twitter, in particular, fell sharply.

Labour market data was also released before the start of trading: the number of initial claims for US unemployment insurance benefits declined slightly more than expected in the week ending 29 January.

Many stock exchanges in Asia were also in holiday mode on Thursday. In Japan, trading took place, and prices fell. The Japanese benchmark index Nikkei closed with a minus of 1.06 per cent at 27,241.31 points. Experts attributed the losses to profit-taking.

“Dovish” statements by the deputy governor of the Bank of Japan (BoJ) did not attract attention in Japanese trading. He had rejected speculation about a tightening of monetary policy in the near future.

There was still no trading in China due to New Year’s celebrations, with the Shanghai Composite last falling 0.97 per cent to 3,361.44 index points on Friday. Hong Kong’s Hang Seng also remained closed on Thursday. It climbed 1.07 per cent to 23,802.26 points on Monday after a shortened trading session.

Because the Chinese Lunar New Year celebrations are still in full swing, trading in China will be suspended all week, and in Hong Kong, the stock exchange will remain closed today.

The European stock markets also went down sharply on Thursday. The EuroSTOXX 50 fell slightly at the opening of the trading session and then fell deeper and deeper into the red. At close, it was down 1.92 per cent at 4,141.02 points.

The DAX opened with a small loss and then remained in red territory. In the afternoon, it increased its minus significantly and finally ended the trading session 1.57 per cent lower at 15,368.47 points. The TecDAX also lost slightly at the start and extended its losses in the course of the day. In the end, it lost 1.97 per cent to 3,454.50 points.

Investors were risk-averse in the environment of the ECB meeting. In addition to the ECB, the Bank of England also decided on its stance. While the ECB continues to stick to its course of extremely low, partly negative interest rates, the British central bank announced the second interest rate hike.

The statements by ECB chief Lagarde also caused movement in the foreign exchange market. The euro climbed to 1.1424 dollars after trading below 1.13 dollars in the morning. Lagarde’s statements were interpreted as indicating a turnaround in monetary policy.

The decision of the OPEC+ oil group to increase oil production by a further 400,000 barrels per day from March had not moved oil prices in the long term. The decision of the oil states led by Saudi Arabia and Russia, taken on Wednesday after unusually short consultations, was widely expected. Brent crude rose 33 cents a barrel to $89.80, while a barrel of US West Texas Intermediate paid $88.66, up 39 cents.

According to the National Statistics Office in Ankara, consumer prices in Turkey rose by 48.7 per cent in January compared to last year. In the previous month, the rise was 36 per cent. On a monthly basis, consumer prices also rose sharply by 11.1 per cent. The high inflation is heavily attributed to the weak lira, making imports more expensive.

Economic growth in the eurozone weakened further at the beginning of the year. The composite index of eurozone private-sector output fell to 52.3 points in January from 53.3 the previous month, the IHS Markit Institute reported in a second release.

In the German service sector, business activity again surpassed the critical 50-point mark in January and returned to the growth zone. According to final data for January, the IHS Markit’s Purchasing Managers’ Index for the sector rose to 52.2 from 48.7 points. Economists had predicted a reading of 52.2. Overall, growth in Germany’s economy accelerated in January. The composite index for production in the private sector rose to 53.8 from 49.9 points in the previous month.

Industrial producer prices in the eurozone have continued to rise strongly in December. Prices at the producer level increased by 2.9 per cent compared to the previous month, as reported by the statistics authority Eurostat. Economists had expected an increase of 3.0 per cent in their consensus forecasts. Year on year, producer prices were 26.2 per cent higher. The forecast of economists had been for an increase of 26.3 per cent.

The number of initial claims for US unemployment insurance benefits declined slightly more than expected in the week ending 29 January. Compared to the previous week, the number of claims fell by 23,000 to 238,000 according to the US Department of Labour in Washington. Economists surveyed by Dow Jones Newswires had forecast a decline to 245,000.

Non-farm productivity in the USA grew by an annualised 6.6 per cent in the fourth quarter of 2021 from the previous quarter, according to preliminary calculations. Economists had expected productivity growth of only 4.4 per cent.