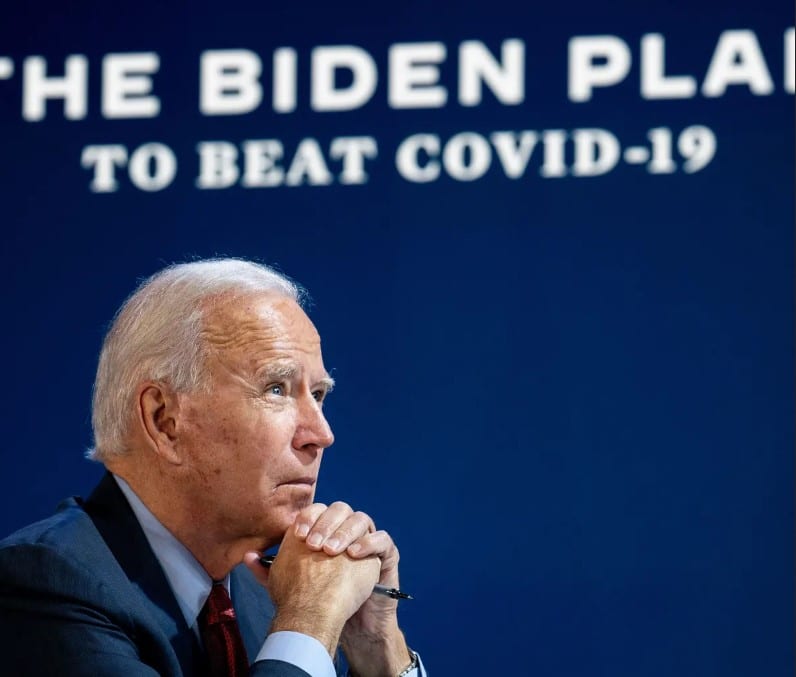 US President Joe Biden is pushing for his planned big Corona aid package to pass through Congress soon. This continues to please not only Wall Street.

A year ago, February saw new highs on the stock markets before the Corona pandemic caused a sharp drop in prices. This year, too, February has started splendidly. Since the beginning of the month, the Dow Jones has gained over 1,000 points. On Thursday, it climbed above 31,000 points, just shy of the record high reached in January. The broader S& P 500 and the Nasdaq Composite have already set new records.

History doesn’t always repeat itself, but it often rhymes…

The number of corona infection cases remains high, and new mutations are causing uncertainty, especially concerning the vaccines’ effectiveness against them.

In the meantime, investors were encouraged by data on initial claims for US unemployment benefits, which fell more than expected. On the corporate side, the figures from QUALCOMM, eBay, PayPal and Merck & Co were in focus.

Asian indices posted losses in Thursday’s trading session after a three-day winning streak. The reason for the halt of the streak was, among other things, a tense liquidity situation in China, according to trade reports. The Chinese central bank had recently unsettled the market with its money market policy.

The European trading venues once again followed the lead from overseas and were correspondingly friendlier. The EuroSTOXX 50 ended trading up 0.84 per cent at 3,640.20 points.

Spurred on by Wall Street, which continued to burst with strength, the DAX also continued its strong run. It closed above 14,000 points for the first time in four weeks. It was the fourth winning day in a row. The last time such a long series occurred was more than two months ago. At 14,060 points and a daily gain of 0.91 per cent, the German benchmark index is now back within touching distance of the record high of around 14,131 points reached in January. The TecDAX began the day without much change, but then also traded higher and ended the day 0.12 per cent higher at 3,499.78 points.

Investors increasingly focused their attention on various DAX stocks, such as Bayer, Deutsche Bank and Infineon.

Even though there were renewed gains across the board today, some market observers now believe that consolidation is not off the table. Investors may now be taking money off the table and are cautious because of the pandemic. Uncertainty about the duration of the lockdown was growing.

Robust US economic data and the prospect of an imminent aid package supported the greenback. The dollar index, which reflects the exchange rate to major currencies, temporarily rose to a two-month high of 91.545 points. The euro slipped below 1.20 US dollars in forex trading.

Oil prices rose further on Thursday, continuing their recent surge. Only temporarily did the strengthening US dollar weigh on oil prices. North Sea Brent’s barrel was valued at $58.74, four cents more than the previous day. US West Texas Intermediate (WTI) oil rose by 43 cents to 56.12 dollars per barrel.

Market observers explain the current weakness of gold primarily with two factors. On the one hand, the greenback is rising in favour of investors, making the precious metal traded in the American currency arithmetically more expensive for interested parties outside the dollar area. This weighs on demand. In addition, rising capital market interest rates in the USA are increasingly taking the shine off gold. Rising interest rates are poison for gold because then a gold investment’s natural disadvantage comes more to the fore. Gold does not yield regular returns, such as interest or dividends.

Meanwhile, the cryptocurrency market continues to print new highs daily. The overall market capitalisation rose to $1.14 trillion, and Ethereum reached yet another all-time high at $1,692. Bitcoin remained relatively stable at around $37,200 while XRP appreciated by over 15 per cent to $0.4550.

New orders in US industry increased by 1.1 per cent in December compared to the previous month. Economists had predicted an increase of 0.7 per cent. There was a plus of 1.3 per cent in the prior month, as the US Department of Commerce further announced.

Non-farm productivity in the USA fell an annualised 4.8 per cent in the fourth quarter of 2020 from the last quarter, according to preliminary calculations. Economists surveyed by Dow Jones Newswires had expected a decline of only 2.8 per cent.

The number of initial weekly claims for unemployment benefits in America has fallen surprisingly sharply. In the week ending 30 January, 779,000 claims were filed. This is 33,000 fewer claims than the week before.

Positive news for German car companies came from China: according to initial calculations by the manufacturers’ association CAAM, the Chinese car market has recovered strongly from the Corona shock. Based on preliminary data, sales by manufacturers of cars and commercial vehicles to dealers climbed by 31.9 per cent in January compared to the previous year. The Chinese market is by far the most important single market for Volkswagen, Daimler and BMW.