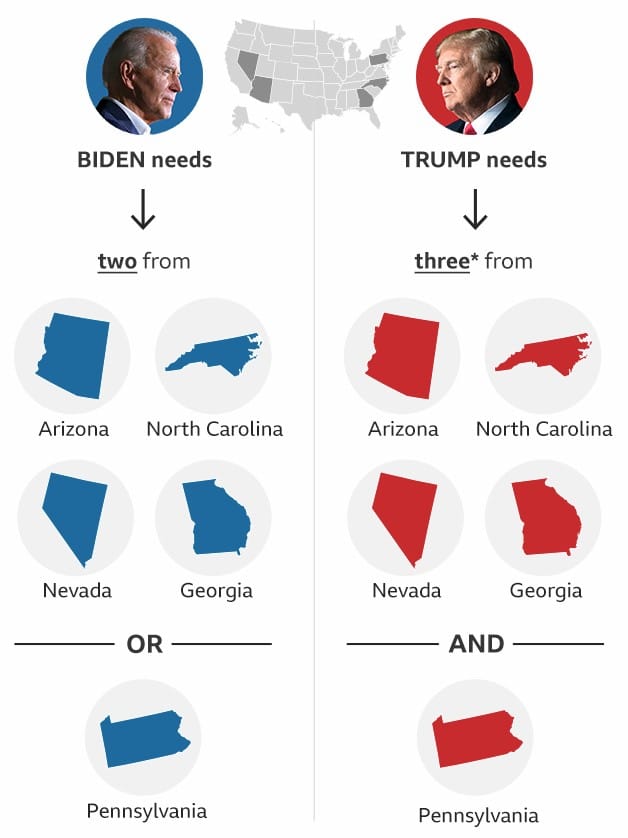 Although it is still not clear who the next US president will be, investors continue to take risk. They are seemingly counting on Joe Biden in the White House and a Republican majority in the Senate. According to market observers, this would be the best-case scenario for a stable government, because the Democrats would have a hard time getting all their planned and controversial programmes through the Senate.

Besides, the corona crisis was mostly out of investors’ focus today. Too much is at stake with the US election and the potential impact on the markets. Also, the lockdowns that are currently occurring in many regions have already been priced into the markets, and downward pressure is softening.

Still, investors should stay cautious and vigilant since anything could happen in the US. The Trump administration is already ramping up in terms of legal pressure, questioning the outcome of the votes count.

The Democratic candidate Joe Biden is only missing the victory in one state to replace Donald Trump in the White House.

The markets also reacted positively to the fact that the Republicans are likely to retain the majority in the Senate. They could thus prevent an increase in corporate taxes or stricter regulation.

Meanwhile, the US Federal Reserve is sticking to its ultra-loose monetary policy. The key interest rate will remain in the extremely low range of 0 to 0.25 per cent for the foreseeable future, and the billion-euro bond purchases to support the economy will continue as usual.

Asia’s stock markets moved towards their highest levels since early 2018 on Thursday. The Japanese leading index Nikkei closed with a gain of 1.73 per cent at 24,105.28 points. China also saw an upward trend. In mainland China, for example, the Shanghai Composite climbed 1.30 per cent to 3,320.13 units, while the Hang Seng in Hong Kong rose by 3.25 per cent to 25,695.92 points by the end of trading.

The hope that Joe Biden will become US President continued to be a strong driver for the share price. If Biden wins, the chances of a full US stimulus package are expected to increase. However, traders in the US do not expect a radical change of course, as the Senate is likely to remain controlled by the Republicans. At the same time, the Democrats will continue to hold the majority in the House of Representatives.

European stock markets also benefited from the good sentiment and positive sentiment from other parts of the world. The EuroSTOXX 50 finally went into the evening with a gain of 1.72 per cent at 3,215.56 points.

At the Frankfurt stock exchange, the Dax continued to build on its initial gains and closed the evening 1.98 per cent stronger at 12,568.09 points. The TecDAX also increased its initial gain and ended the day 1.93 per cent higher at 3,021.56 points.

The focus was on political developments in the USA and the expected results of the Fed interest rate meeting. Meanwhile, the balance sheet season continued. In the event of a disputed outcome and a lengthy legal dispute, the uncertainty could well have a negative impact, particularly on risky asset classes, and cause a market correction.

In the Forex market (FX), the US dollar was taken to the woodshed during the playbook-like risk-on rally that is currently happening. By the end of trading, the euro was well above the $1.18 mark, which it had crossed in the morning. The European Central Bank (ECB) set the reference rate at 1.1855 (Wednesday: 1.1721) dollars.

Oil prices fell on Thursday after having risen significantly the previous day. Investors are still eagerly waiting for the results of the US presidential election. The barrel of Brent crude last cost 40.91 US dollars, 35 cents less than the day before. The barrel price of WTI oil fell by 47 cents to 38.68 US dollars.

Joe Biden’s potential electoral success also resonates with precious metals. The market is currently pricing in the fact that the Democrats would pass a trillion-dollar aid package, which would hurt the US dollar and help the precious metals. Gold appreciated in value by over $40, closing at $1,945 per troy ounce. The daily high even registered at $1,952.50.

The cryptocurrency space is in full-on bull-run mode. After Bitcoin crossed the tough resistance at $14,000, it continued its flight today jumping up 9.4 per cent to currently $15,640. The altcoins also continued to rally but, as it is often the case in this immature market, lags behind Bitcoin for the time being. Ethereum still managed to gain 7.4 per cent to $434, while XRP increased by 5.6 per cent, breaking through resistance at $0.25 and currently trading at $0.2520.

Last week’s number of initial applications for US unemployment assistance has slightly decreased in the week ending October 31, showing that redundancies have stabilised at a high level while virus cases are rising sharply. Compared to the previous week, the number of applications on a seasonally adjusted basis fell by 7,000 to 751,000, according to the US Department of Labor in Washington.

German industry received fewer orders in September than expected. The Federal Statistical Office announced on Thursday in Wiesbaden that incoming orders were up 0.5 per cent on the previous month. Analysts had expected an increase averaging 2.0 per cent. Compared to February, when the pandemic had not yet hit Germany, orders are still 2.6 per cent lower. Compared to the month of September last year, orders fell by 1.9 per cent.

The British central bank has further relaxed its monetary policy amid the corona crisis. To support the economy, it intends to purchase additional government bonds worth 150 billion pounds (around 166 billion euros), as the Bank of England announced in London on Thursday. Analysts had expected further easing, but on average they had estimated it at a slightly lower level. In contrast, the central bank left its key interest rate just above the zero line at 0.1 per cent.

Canopy Growth moves to the NASDAQ

Shares of the Canadian cannabis company Canopy Growth will no longer be traded on the New York Stock Exchange as of next week, the company announced in a press release.

The company announced in a press release that it intends to transfer its US listing to NASDAQ Global Select. The last day of trading on the New York Stock Exchange (NYSE) will be November 13, 2020, and Canopy Growth shares will be listed on NASDAQ from the following Monday, November 16. The ticker symbol CGC will remain unchanged.

Shareholders of Canopy Growth will not be required to take any action themselves, and the current shares held by retail and institutional investors will be automatically transferred to the NASDAQ.

The world’s largest industrial gases group, Linde, is defying the weak economy during the pandemic. The company is, therefore, again raising its profit forecast for the current year. Earnings per share are now expected to be between $8.05 and $8.10 (previously $7.60 to 7.80), which would be around 10 per cent more than in the prior year ($7.34 per share). In the third quarter, adjusted operating profit rose by nine per cent to $1.52 billion, although sales were down two per cent year on year at just under $6.9 billion. A decline in sales in the Americas was partially offset by business in Asia and the plant engineering business.