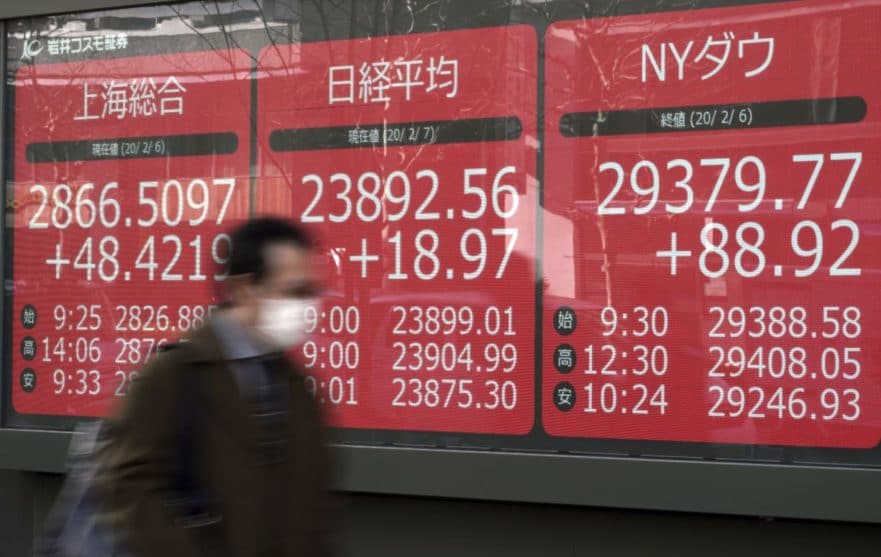 Many of the international stock exchanges reported further gains following the upward trend from Tuesday and Wednesday. The coronavirus worries seem to be forgotten, and positive signs from the balance sheet season additionally help to boost the markets.

Still, the question remains how robust this current rise is since we’re far from being out of the woods. According to experts, the economic impact that the coronavirus will have is still unclear. Further, the global equity markets seem to be in an overall overbought condition.

Time will tell, but this recent pump in the equity markets seems unwarranted, suspicious and could well be a bull-trap.

Investors on Wall Street have run out of steam after initial records. At times, the Dow Jones Index even went into the red after reaching a new high of 29,406 points shortly after the start of trading.

While concerns about the coronavirus increasingly ebbed, the reporting season continued to gather momentum. On Thursday, for example, Twitter shares were the focus of attention. The short news service had opened its books before the stock market started.

The fact that the impeachment proceedings against US President Donald Trump were not successful and that there were friendly signals from China on the subject of the customs dispute also had a positive effect.

Economic optimism provided further support for Asian stock markets on Thursday. For example, China halved its special tariffs on imports of American goods worth 75 billion US dollars to implement the partial agreement in the trade war with the USA. The step on February 14th coincides with a reduction in American punitive duties on imports from China.

The acquittal also reassures the market of Donald Trump and the coronavirus crisis, which is receding into the background again. The CSI-300 index, which comprises the 300 most important shares on the Chinese mainland stock exchange, has recently risen by 1.7 per cent. The Hang Seng in Hong Kong gained 2.8 per cent. In Tokyo, Japan’s leading index, the Nikkei 225, closed with a gain of 2.4 per cent at 23,873 points.

Europe’s stock exchanges also made stronger presentations on Thursday. The EuroSTOXX 50 moved into the profit zone in the course of trading.

At the stock market opening, the index already showed a plus and then also 0.73 per cent in plus at 3,805.52 points went out of trading.

A large number of corporate balance sheets were in the focus of investors this Thursday. ArcelorMittal, UniCredit, Sanofi, OSRAM and RATIONAL, among others, already presented figures before the stock exchange opened.

The euro weakened on Thursday, falling to its lowest level in about four months. At the close of the trading session, the common currency cost $1.0980, half a cent less than its daily high. The European Central Bank (ECB) had previously set the reference rate at 1.1003 (Wednesday: 1.1023) dollars. The euro’s losses were accompanied by broad-based dollar strength.

Oil prices rose slightly on Thursday. Traders cited positive developments in the US-China trade dispute as to the reason. A barrel of North Sea Brent cost $55.35 in the evening. That was seven cents more than on Wednesday. The price of American WTI crude oil rose by 45 cents to $51.20.

After initial losses, the gold price also made significant gains. At the end of the trading day, a plus of 0.7 per cent to $1566 was on the board.

Most of the top 10 cryptocurrencies also continued thair upward momentum on Thursday. The Bitcoin price remained stable at $9,700 while Ethereum rose by another 3.1 per cent to $211. XRP also further increased by 1.6 per cent to $0.2810.

Pinterest opened its books for the fourth quarter of 2019 after trading on Thursday evening, thus surprising the market. EPS for the past three months was reported at USD -0.064, compared with USD 0.072 per share in the same period of the previous year. Experts had previously assumed earnings per share of USD 0.079. Also, sales totalled $399.898 million. Here, analysts’ estimates amounted to $367.4 million, compared to $273.2 million in the fourth quarter of 2018.

After the social network had generated a loss of USD 0.110 in 2018, the current figure is significantly lower than the analysts’ forecast of USD -0.062 per share. On the sales side, the experts had assumed that the company would break through the billion-dollar barrier and set their estimates at an average of USD 1.11 billion. After 755.9 million US dollars in 2018, Pinterest generated sales of 1.143 billion US dollars in the recently completed financial year.

Twitter sales break the billion mark for the first time

Twitter posted revenues of more than one billion dollars for the first time in a quarter in the Christmas quarter.

“We have reached a new milestone,” CEO Jack Dorsey announced Thursday. In the three months to the end of December, flourishing advertising revenues boosted revenues by eleven per cent year-on-year to $1.0 billion. Twitter thus clearly exceeded expectations. The share price initially climbed by over eight per cent before the stock exchange.

However, high costs depressed the quarterly profit from 255 million to 119 million dollars. The number of daily active users increased from 145 to 152 million within three months. The company has not reported the previously relevant number of active users at least once a month, which had reached around 330 million, for some time. In the entire past 2019 fiscal year, Twitter increased revenues by 14 per cent to $3.46 billion. Net income increased from $1.2 billion to $1.5 billion.