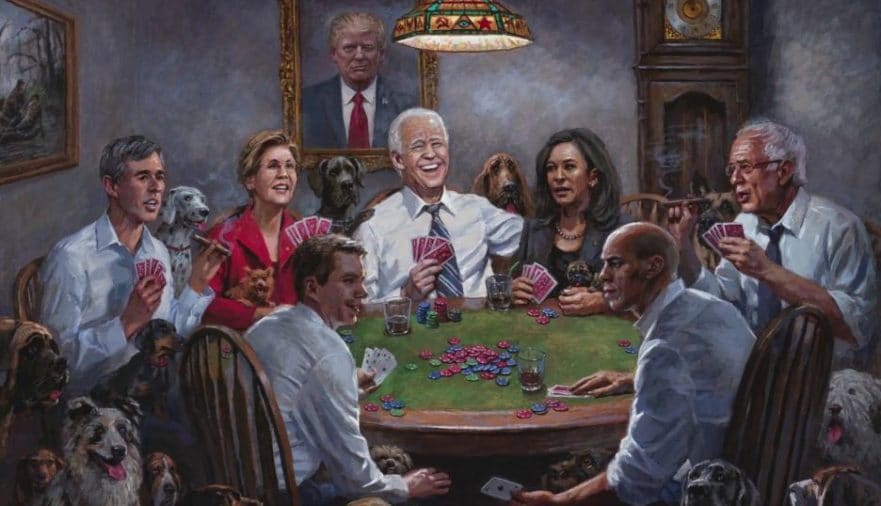 While in Europe, panic is spreading again, in the USA everything is waiting for results in the billions of dollars in negotiations between Republicans and Democrats. But the talks that have been going on for days are stalling, which has not been well received on the stock market so far.

More and more, in political Washington, Friday is being mentioned as the last chance for an agreement. The negotiations are particularly important because of the upcoming presidential election on November 3.

However, the bull market in tech stocks continues unimpressed by any policy after an initially hesitant start. Apple & Co. seem to be above the worries of the “normal” stock market players and continue to march from record high to record high. The indices of the Nasdaq technology exchange rise above the 11,000 point mark.

In the end, Wall Street was in positive territory today. The Dow Jones initially showed restraint, but trading picked up in the day, and the stock market barometer closed with a plus of 0.68 per cent at 27,387.18 points. The NASDAQ Composite technology index also made it onto green territory and even reached a new all-time high of 11,121.19 points. With a plus of 1.0 per cent, the index ended the day at 11,108.07 points.

The ongoing arguments between the USA and China only had a secondary impact on the mood on the US stock market. Chinese technology, in particular, has come under American scrutiny. “Apps from the People’s Republic of China threaten our privacy, spread computer viruses and spread propaganda and false information”, US Secretary of State Mike Pompeo recently announced. He said they should best be banned from the USA.

Better-than-expected economic data provided a boost: The US labour market has eased a little. Last week, the number of initial applications for unemployment benefits reduced by 249,000 to 1.186 million. Economists had expected an average of 1.4 million applications.

Most of the major Asian equity markets fell on Thursday.

In Tokyo, the Nikkei closed with a loss of 0.43 per

After the recent positive performance, investors now took profits. Especially as the deterioration in relations between the USA and China caused concern. On the other hand, the strong performance of the US stock markets provided a tailwind, with investors hoping for a new stimulus package.

The European stock markets also recorded losses on Thursday. The EuroSTOXX 50 was ultimately in the red after initially falling by 0.13 per cent to 3,264.08 points. In the end, the market barometer lost 0.86 per cent to 3,240.39 units.

Especially the increasing number of new corona infections in Germany is causing alarm bells to ring on the markets. The Dax 30, which was initially launched with a lot of momentum, came under increasing pressure and slipped into negative territory with volatility.

Further pressure came from the political news situation since there is as yet no agreement in US politics on a continuation of US unemployment assistance.

Last but not least, the latest quarterly company reports were mixed. Quarterly results were published by Siemens, Merck, Henkel, Munich Re, Adidas, Beiersdorf and Lufthansa, among others.

On the foreign exchange market, the euro came under pressure following an interim high against the US dollar. Following robust German order intake, it had reached $1.1916, its highest level since May 2018. By the afternoon, however, it had fallen back to a daily low of $1.1818. The Turkish lira is also under massive pressure on the Forex market, losing further ground against the greenback due to weak economic data.

Oil prices rose slightly on Thursday. On the previous day, the prices for US oil and North Sea oil on Wednesday had at times risen to their highest levels since the drastic slump in March. This enabled them to make up for all the losses resulting from the corona crisis and a price war within OPEC+. Most recently, a barrel of Brent crude at 34 cents cost more than 45.50 US dollars. The barrel of US West Texas Intermediate (WTI) oil rose by 12 cents to $42.31.

The price of gold continues to be the star in the financial markets, rising even further after yesterday’s record hunt. The precious metal climbed up to $2,069 per troy ounce today and is still sitting at around $2,060 at the time of writing.

After taking a short breather of a couple of days, cryptocurrencies accelerated their upward movement again today. Bitcoin rose by 1.6 per cent to $11,800, while Ethereum climbed only marginally to now $397. XRP gained 1.2 per cent on the daily to $0.3080, and Bitcoin Cash was the biggest gainer with 7.2 per cent to $317.

More positive than expected news on the US labour market came in today: 1.18 million Americans have applied for help, while 1.45 million had been expected, which is significantly more than expected.

Incoming orders in the German industry recovered unexpectedly strongly after the collapse of the Corona crisis in June. After order intake in May had already risen by 10.4 per cent month-on-month, there was a 27.9 per cent increase in June, the Federal Statistical Office announced.

As expected, the British central bank did not follow up on its crisis policy in the fight against the consequences of the pandemic. The key interest rate remains at the record low of 0.10 per cent.

The collapse of air traffic during the corona crisis caused Lufthansa to lose another billion euros in the second quarter. The bottom line was a loss of around 1.5 billion euros after a profit of 226 million a year earlier.

The operating loss (adjusted Ebit) amounted to 1.7 billion euros. The company owed the fact that it did not get any worse to record results from its cargo subsidiary Lufthansa Cargo, which benefited from the sharp rise in demand for cargo flights.

The shares of Facebook and Apple again went on a record hunt on Thursday in the recently somewhat brighter stock market environment.

Particularly noticeable was the 6.49 per cent increase in Facebook’s share price to $265.28; in the meantime, the share price rose to $266.59, a new record. They were thus among the favourites on the technology-heavy NASDAQ 100, which also reached a historic high in trading.

Apple’s shares also reached a new all-time high of $457.65, and in the end, the share price rose by 3.49 per cent to $455.61. According to stock market experts, the latest rise is probably partly due to the 4 to 1 stock split announced for the end of August – i.e. investors will receive three new shares for each share held. The price will then drop arithmetically to a quarter. This will make the shares easier to trade again, which could further increase demand. Apple recently ousted the state-owned Saudi oil company Aramco as the most valuable listed company in the world.