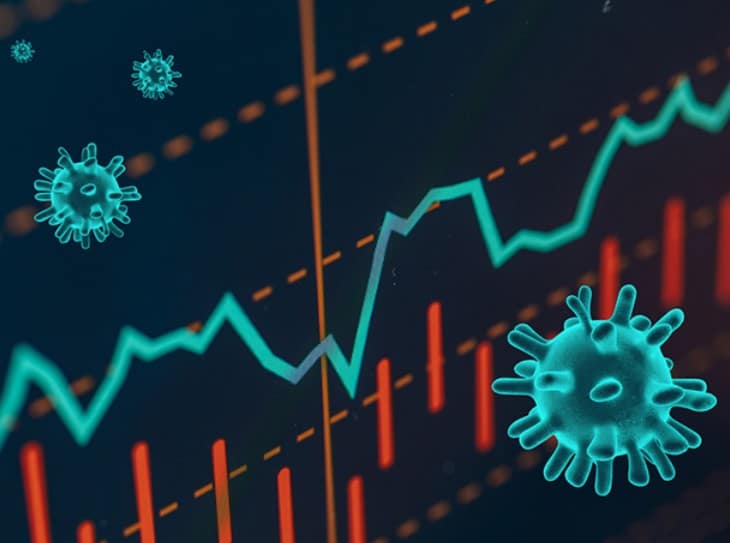 New corona and economic worries, and anxious glances at China have spoiled the mood of investors today. After the party mood of the past few days, when tech stocks, in particular, were in the limelight, there were some heavy losses today.

Although the major indices recovered from their lows intraday, they remained in the red. The recent winning streak, which had led to further record highs for the Nasdaq and S&P 500 almost every day, has thus been broken, at least in the short term.

On the New York Stock Exchange, investors withdrew from the market today for several reasons. Overall, the Street was primarily following the weak signals from Asia and Europe.

The US trading session was dominated by fears that the economic recovery might not be as strong as expected. There are fears that supply bottlenecks and a lack of labour could slow down the recovery.

With a price drop of around 5 per cent, Didi shares were again among the major losers on the US stock market. The government in Beijing had blocked the app of the Chinese ride-hailing company, which had only recently gone public, from being downloaded due to the alleged illegal collection of user data.

Heavy losses were seen on the stock exchanges in the Far East today. In Tokyo, the Japanese benchmark index Nikkei ended the day down 0.88 per cent at 28,118.03 points. In mainland China, the Shanghai Composite closed 0.79 per cent lower at 3,525.50 points. In Hong Kong, the leading index Hang Seng slumped 2.89 per cent to 27,153.13 index points by the close of trade.

Corona continued to keep Asian investors on the sidelines, and even good news from the US fizzled out. Investors feared that a state of emergency could be declared again in Tokyo, which would also weigh on the economy. In Hong Kong, weak technology stocks also pushed the overall market down following China’s announcement that it would limit the power of corporations that had become too big.

The European stock markets also showed substantial losses. The EuroSTOXX 50 already posted a slight loss at the start of trading and ultimately exited the trading session with a heavy loss of 2.13 per cent to 3,991.66 points.

After the Fed minutes yesterday, the focus on Thursday was on the ECB’s strategy review results. In the meantime, the ECB aims for an even 2 per cent inflation in a new strategy. In addition, exceeding this target value is temporarily permitted.

Gains relative to many currencies on the forex market were made today by the “crisis currencies” Japanese yen and Swiss franc. The market pointed to the gloomy stock market sentiment as the reason. Weak data from the US labour market also weighed on the dollar exchange rate. The euro rose in the course of this and cost 1.1841 US dollars in the evening, about half a cent more than in European and Asian trading. On Wednesday, the euro had fallen to its lowest level since the beginning of April at 1.1782 dollars.

The weaker greenback benefitted the commodities market, supporting oil prices which recently came under pressure. Brent crude appreciated by 1,01 dollars to 74.35 US dollars, while West Texas Intermediate only gained 2 cents to 73.25 US dollars.

Gold pushed higher towards $1,820 intraday before retreating to $1,802, almost the same level as yesterday’s close.

Cryptocurrencies came under further pressure after news outlets started beating the drum of “more regulations for digital exchanges and cryptocurrencies”. Bitcoin dropped 4.1 per cent to $32,700, while Ethereum plummeted by 9.5 per cent to $2,120. Most other altcoins felt the pressure as well and declined in-synch with BTC and Ether. Especially DeFi projects such as Polkadot, Uniswap, Chainlink and Solana were burdened, falling over 10 per cent on the daily chart.

As expected, the German economy slightly increased its exports in May. According to the Federal Statistical Office, exporters sold 0.3 per cent more than in the previous month. Economists surveyed by Dow Jones Newswires had predicted a plus of this amount. Exports thus rose for the 13th month in a row. Compared to the same month last year, exports were 36.4 per cent higher. Imports rose by 3.4 per cent in May compared to the previous month. Over the year, there was an increase of 32.6 per cent.

The number of initial claims for unemployment benefits in the United States increased slightly in the week ending 3 July, contrary to expectations. As announced by the US Department of Labour, compared to the previous week, the number of initial claims rose by 2,000 to 373,000 on a seasonally adjusted basis. Economists surveyed by Dow Jones Newswires had predicted a decline to 350,000.

Following its withdrawal from the EU, Great Britain has signed a free trade agreement with the European Free Trade Association EFTA, Norway, Iceland, and Liechtenstein states. The Department of Trade announced this in London on Thursday. The deal will boost industries such as digital, finance and services and reduce tariffs, it said. The fish processing industry, for example, will benefit from cheaper imports of fish and seafood. This is “the most comprehensive free trade agreement Liechtenstein has ever concluded”, the government in Vaduz announced. In addition to cross-border trade in services, including financial services, the agreement also covers investment, protection of intellectual property, digital trade, capital movements and public procurement.