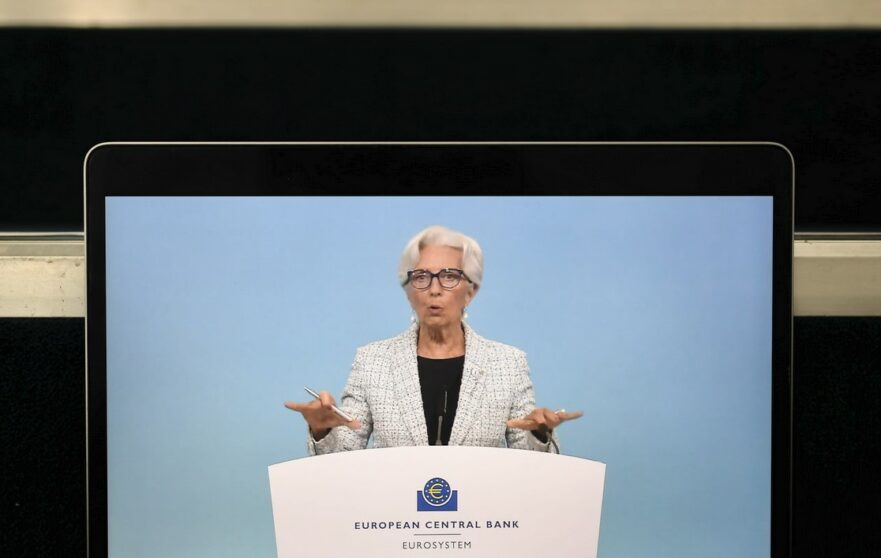 Although the ECB and the Federal Reserve are currently acting moderately, scepticism remains on the markets. Today, the Nasdaq technology exchange (once again) fared somewhat better than the blue chips on the New York Stock Exchange, but overall it was a dismal trading day. Pharmaceutical stocks, in particular, fell after increasing reports that the Biden administration wants to lower drug prices.

The ECB announced today that in the fourth quarter, purchases of government and corporate securities under the corona emergency purchase programme PEPP would be “moderately” lower than at present. It initially remained unclear how severe the curtailment would be. At the same time, the ECB confirmed the duration of PEPP with a volume of 1.85 trillion euros until at least the end of March 2022. Beyond that, an end to the low-interest rates in the euro area is not in sight. The ECB is thus keeping the key interest rate in the euro area at the record low of zero per cent.

However, statements by various central bankers in this direction have not yet come to fruition. This is because it is also the bank’s declared aim not to spook the markets. This cautious approach has so far supported the technology stocks in particular, which remain within immediate reach of their record highs.

Market participants, however, keep asking themselves when the US Federal Reserve will start scaling back its stimulus-buying bond purchases. The fear that this could happen quite soon did not diminish after the new jobs data on Thursday.

Although the Dow Jones opened with a moderate loss, it was then able to move into the profit zone at times. In the end, it left the session 0.43 per cent weaker at 34,879.38 points. The NASDAQ Composite also traded temporarily firmer, while it had risen marginally at the start. It also moved back into red territory in late trading, ending the day 0.25 per cent lower at 15,248.25 points.

However, the stock market received some support from encouraging labour market data. Last week, fewer Americans than expected filed for unemployment benefits for the first time. The number of initial claims fell to the lowest level since the beginning of the crisis.

Asian markets mostly followed negative cues from the US on Thursday.

The markets in Europe only went sideways on Thursday. The EuroSTOXX 50 had a weak start and ended the session unchanged at 4,177.11 points.

After the announcement of the ECB decisions, the DAX put its initial losses behind it and ultimately went into the evening with a small gain of 0.08 per cent at 15,623.15 points. The TecDAX closed almost unchanged at 3,935.10 points in the evening, after initially starting with a minus.

Investors on the European markets were eagerly awaiting the results of the ECB deliberations. Particular attention was paid to the ECB’s pandemic programme (Pepp). Here the bank announced its intention to slow down the programme.

Monetary policy decisions by the European Central Bank (ECB) did not give the euro any new direction on the foreign exchange market. In New York trading, the euro last cost 1.1829 US dollars.

Oil prices rode a rollercoaster on Thursday. Prices quickly recovered from interim losses, only to fall back again with a weakening Wall Street. According to the Department of Energy, in the US, crude oil inventories fell less than expected last week. US oil production, on the other hand, fell significantly. However, the data were distorted by the effects of hurricane “Ida”. Large parts of crude oil production in the Gulf of Mexico are still at a standstill. North Sea Brent cost 6 cents more than the previous day at $72.66, while US light oil WTI rose 17 cents to 69.47 dollars.

The price of gold trended sideways but was able to gain slightly to $1,793 per troy ounce at the end of the day.

The cryptocurrency market saw some winners and losers among the top digital assets. Bitcoin traded sideways at around $46,500, while Ethereum lost 2.7 per cent to $3,455. Meanwhile, Cardano, Solana, Binance Coin and XRP remained stable at their previous day levels. Defi platform Polkadot gained 7.2 per cent to $30.20, while Algorand continued its fulminant rally, adding another 25.5 per cent to trade for $2.25.

In China, the rise in producer prices accelerated surprisingly in August due to the sharp increase in the cost of raw materials. The statistics bureau said they climbed 9.5 per cent in August from a year earlier in Beijing on Thursday. The increase was the strongest since August 2008, and higher than experts surveyed by Bloomberg had expected. They had expected a plus at the July level of 9.0 per cent. Although prices for producers continue to rise strongly, this development is hardly reaching consumers – on the contrary. The increase in consumer prices fell to 0.8 (July: 1.0) per cent in August. Analysts had expected a plus of 1.0 per cent.

The number of initial unemployment benefits claims in the United States fell in the week ending 4 September to a corona crisis low. Compared to the previous week, the number of claims fell by 35,000 to 310,000 on a seasonally adjusted basis, according to the US Department of Labour in Washington. That’s the lowest level since the week ended 14 March 2020. Economists surveyed by Dow Jones Newswires had predicted only a decline to 335,000.