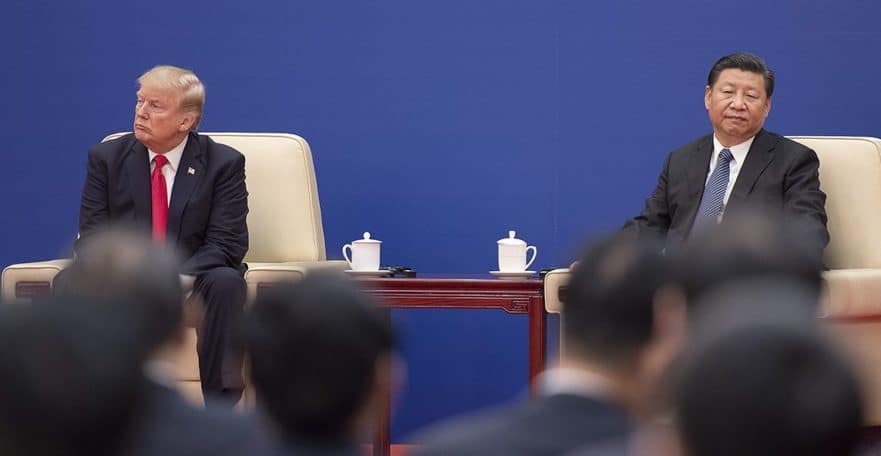 Conciliatory tones from the White House have raised hopes in the markets for a defusing of the American-Chinese customs dispute. Encouraging signals also came from the Brexit negotiations.

In particular, President Donald Trump announced that he would meet with the head of the Chinese delegation in Washington this Friday, Deputy Prime Minister Liu He, which gave investors hope for a solution to the customs conflict.

In New York, the Dow Jones, the leading US index, closed 0.7 per cent higher at 26,346 points. The market-wide S&P 500 gained 0.9 per cent to 2,919 points and the technology-oriented Nasdaq 100 recovered by 1.1 per cent to 7,690 points. Market analyst Edward Moya of trading house Oanda believes that at least a partial agreement between the two countries is possible. For example, the next round of tariff increases planned for mid-October could be put on ice.

However, if no breakthrough is achieved in the talks, existing punitive tariffs on Chinese imports worth around 250 billion US dollars are to be increased from 25 per cent to 30 per cent on Tuesday.

Nevertheless, the outlook for US equities remained good, experts say. The world’s largest economy remains on a growth path, and the US Federal Reserve is likely to cut interest rates further if the economy weakens. This is also demonstrated by the inflation rate, which stagnated at 2.4 per cent in September.

Encouraging signals also came from Great Britain. According to British Prime Minister Boris Johnson and his Irish colleague Leo Varadkar, there is a way to reach an agreement on relations after the planned withdrawal of the United Kingdom from the EU. They did not give details. But they announced further negotiations.

Most Asian stock markets recorded price gains on Thursday. The trade dispute between the USA and China continues to be the dominant topic. The CSI 300 with the 300 most important shares on the Chinese mainland stock exchanges rose most recently by 0.6 per cent to 3,864 points. The Hang Seng index in Hong Kong gained 0.3 per cent to 25,767 points. The Japanese Nikkei-225 ended the day 0.5 per cent higher at 21,552 points.

The European stock markets were also friendly. The EuroSTOXX 50 already rose at the start of trading, oscillated around the zero line in the meantime, but was subsequently able to post gains again. It said goodbye with a plus of 0.92 per cent at 3,493.96 index units.

Investors waited for the landmark results from the trade talks. Optimistic sounded that China agreed to buy more US agricultural products. Also, the Brexit remained in view, and Premier Johnson travelled to Ireland today for talks with his counterpart Leo Varadkar.

In Germany, the DAX30 was marginally lower to the sound of the starting bell. It then changed sign several times but showed a friendly tendency from the afternoon onwards. It ended trading 0.58 per cent higher at 12,164.20 points.

The TecDAX opened hardly weaker and then fell further. During the day, however, it managed to contain its losses somewhat and closed 0.19 per cent lower at 2,725.11 points.

The euro had to surrender part of its daily gains by the close of trading and fell to 1.1010 dollars. The European Central Bank (ECB) had set the reference rate at 1.1030 (Wednesday: 1.0981) dollars. Traders reported speculative buying that would have boosted the euro. The background was hopes for an at least partial agreement in the trade conflict between the USA and China.

After the rise above 1.10 dollars, automated buying had also taken place. At the same time, the dollar also tended to weaken against other major currencies. Should the euro succeed in overcoming the resistance at 1.1021 dollars on a sustained basis, the technical situation would brighten further, experts say.

The gold price fell from an initial sharp rise to over $1,515 an ounce to currently around $1,500 an ounce. The positive tones of the trade dispute boosted global equity markets and pushed gold down.

Oil prices rose slightly today. A barrel of Brent currently costs about $59.25, while WTI is trading at approximately $53.00 a barrel.

The cryptocurrency market also rose slightly on Thursday. The overall market cap is currently at $232 billion. This time, Bitcoin and Ethereum recorded gains of approximately 5 per cent while XRP was almost standing still. One Bitcoin is being traded for $8,550, one Ethereum for $190 and one XRP for $0.28.

The trade dispute between China and the US is affecting the Philips medical technology group more than expected. The Dutch company corrected its yield targets for the current year downwards on Thursday. The relocation of production from the USA to China and vice versa, with which Philips intends to evade the punitive tariffs, is more difficult and more protracted than expected, admitted CEO Frans van Houten. “The effects are higher, and the countermeasures have been delayed. This affects the Connected Care division, which manufactures equipment and software for remote monitoring of the chronically ill. This means that Philips generates three billion euros a year, around one-seventh of Group sales.

The operating return on sales (Ebita margin) will, therefore, improve this year by only 0.1 to 0.2 percentage points instead of a full percentage point, warned Van Houten. However, the manager is sticking to his sales target – comparable growth of four to six per cent.

After harsh criticism from China, Apple has removed an app from its offer, which showed demonstrators in Hong Kong, the locations of police units during their protests. The makers of “hkmap.live” announced on Twitter on Thursday that Apple had deleted the program from the App Store. According to the company, the reason for its decision was that the mobile traffic application obstructed law enforcement and endangered Hong Kong residents. China had previously accused the iPhone company of supporting the demonstrators in Hong Kong.

Last chance for a deal? British Prime Minister Boris Johnson is expected today in Dublin in the struggle for an agreement in the Brexit dispute. A lunchtime meeting with his Irish counterpart Leo Varadkar is likely to focus on how the border between Britain’s Northern Ireland and EU member Ireland can remain open after Britain’s withdrawal from the European Union. Time is pressing: the country is to leave the state community as early as 31 October. So far, it does not look as if an agreement will be reached at the last second.