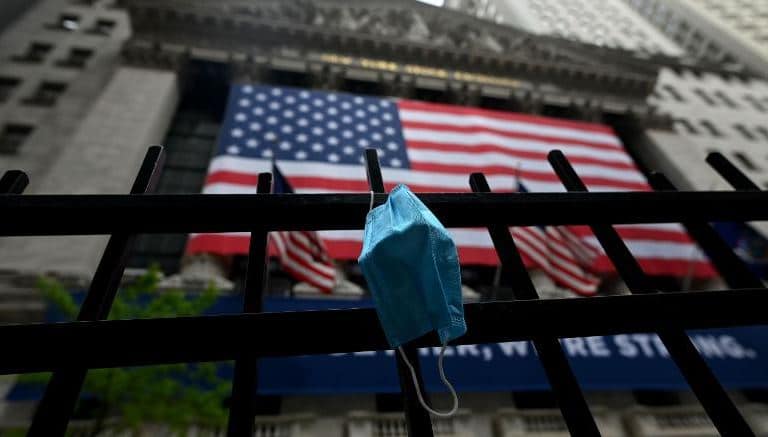 The Fed’s gloomy economic forecast from the previous day scared investors and triggered a drastic slide in prices today. The corona crisis will put a heavy burden on the economy, the labour market and inflation, warned Fed Chairman Jerome Powell. There were considerable economic risks. “This is the biggest economic shock we can remember,” Fed Chairman Jerome Powell said on Wednesday evening. Moreover, fears of a second wave of corona have flared up again.

The Dow Jones, for example, collapsed by more than 6 per cent today – the biggest price drop since March. The market had previously expected a very rapid economic recovery from the corona crisis, a steep V-shaped recovery. Still, the Fed had now propagated a U-shaped recovery, the Mußler stock market letter said on Thursday morning. A U-shaped recovery means that it will take longer for the economy to bottom out.

Today, in an intensive risk-off environment, sell-everything seemed to be the order of the day again.

On Wall Street, disillusionment reigns on Thursday. The US leading index Dow Jones started 0.6 per cent weaker at 26,828.51 units and then fell sharply into the red. At the sound of the closing bell, the stock market barometer recorded a minus of a whopping 6.88 per cent at 25,133.97 points. The NASDAQ Composite already opened the session in deep red. It then remained in red territory, ending the trading session 5.27 per cent down at 9,492.73 index units.

The US Federal Reserve expects the economy to contract by 6.5 per cent this year, followed by growth of 5.0 per cent next year. Interest rates would probably remain at the zero line for years to come, signalling the currency watchdogs.

The Fed’s depressing outlook also upset investors in Asia’s major stock markets on Thursday. Earlier, the Organisation for Economic Co-operation and Development (OECD) had already pointed out in an economic report that citizens, companies and states would have to prepare for severe and long-lasting consequences due to the corona pandemic.

Investors also saw red on the European stock markets. The EuroSTOXX 50 started the day 0.93 per cent down at 3,263.61 units. The stock market barometer continued its downward trend and ended the trading day 4.53 per cent lower at 3,144 points.

The leading German index plunged by almost 560 points or 4.5 per cent on the holiday of Corpus Christi. For the first time since the end of May, it closed below the 12,000 point mark. This puts an end to the recent glorious recovery rally for the time being. In just eleven days the Dax had risen by almost 19 per cent to as high as 12,913 points before the price reset this week.

In the currency market, some investors once again fled to “safe havens” such as government bonds. This depressed the yield of ten-year German government bonds to minus 0.431 per cent. The Swiss currency was also in demand. As a result, the value of the US dollar fell at times to a three-month low of 0.9375 francs.

The common currency euro came under pressure and last traded at US dollar 1.1306. At times, the euro exchange rate even slipped below the $1.13 mark.

The prospect of a protracted recovery in demand from the coronavirus shock has also caused oil prices to collapse. A barrel (159 litres) of North Sea Brent oil fell by almost 7 per cent to $38.87, while light US oil cost 8 per cent less at $36.45.

The price of gold remained comparably stable and closed at $1,728 per troy ounce.

Weak data from the US labour market added to the gloomy picture on Thursday. In the week to June 6th, 1.5 million people made their first application for unemployment benefits – more than expected. Compared to the previous week, however, the number dropped by 355,000 applications.

The British-Dutch company Just Eat Takeaway.com takes over the US rival GrubHub. This means that Uber, the transport services agent who was traded as the likely buyer of GrubHub, will not get a chance after all. According to US media reports, the German competitor Delivery Hero has also shown interest.

Just Eat Takeaway wants to pay the purchase price entirely in its shares and accepts a 27 per cent premium on the latest closing price of GrubHub. The companies agreed on 75.15 dollars per share, as they announced after the US stock market closed last night on Thursday. This means that GrubHub will be valued at around 7.3 billion dollars (6.4 billion euros) at the time of the takeover.

According to the companies, the merger will create the largest food supply company outside China and is expected to be completed in the first quarter of 2021.

Although the GrubHub share reacted in NYSE trading on Thursday with a final increase of 4.64 per cent to 61.75 US dollars, it was quoted well below the 75.15 dollars offered. The Just Eat Takeaway.com share, on the other hand, collapsed by over 12 per cent.

Trade with the Best Forex Brokers that accept Paypal

The Swiss food multinational Nestlé has acquired a majority stake in the US company Vital Proteins. Financial details of the sale were not disclosed. Vital Proteins operates a lifestyle and wellness platform and sells dietary supplements, beverages and food products. The company will continue to work independently after the Nestlé acquisition. Nestlé is also considering the sale of its water business in North America. In the future, the focus will be on international brands, premium mineral water and water with health-promoting additives.