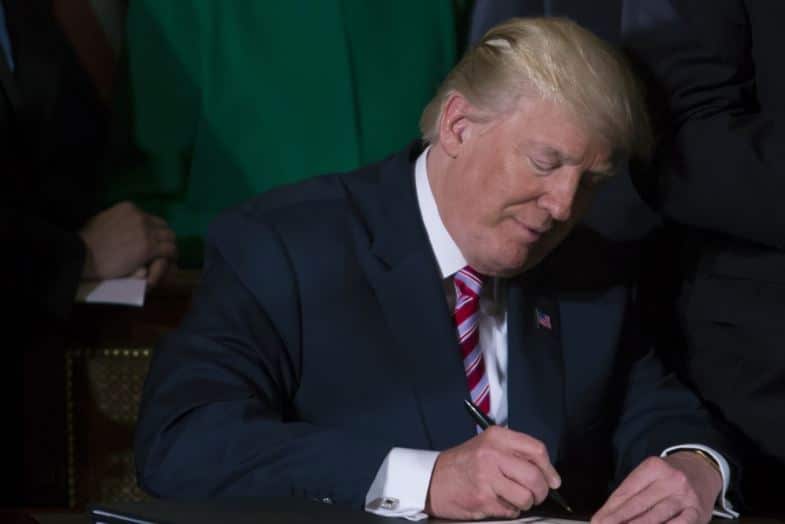 Is it finally over?

US President Donald Trump has signed a settlement in the US-Chinese trade dispute, according to informed sources. This was reported at least by the news agency Bloomberg on Thursday.

This would avoid the new wave of US tariffs on Chinese goods worth around 160 billion US dollars due on 15 December. Under the agreement, China has promised to buy more US agricultural goods, Bloomberg continues. The legal documents have not yet been completed, even if the agreement has been reached. A US government spokesman did not comment on Bloomberg.

This information has not yet been officially confirmed, which also explains the reaction in the market. Market participants are not trusting the whims and tweets of Donald Trump for a long time. Investors initially reacted with a leap of joy, but the excitement of the investors quickly subsided again, as this is not the first time that Trump has promised an agreement with China that has not yet been reached and officially confirmed.

On Thursday there were new records to report on Wall Street.

The majority of stock markets in Asia showed a positive trend on Thursday.

The positive impetus came from the Fed’s interest rate decision, which left its monetary policy unchanged. In addition, the forecast for US economic growth in 2020 was somewhat higher than in September.

The stock markets in Europe rose significantly on Thursday.

The EuroSTOXX 50 turned into profit in the late afternoon and recorded a daily gain of 0.6 per cent with 3,706.35 points.

According to Donald Trump, the euro’s exchange rate fell slightly in the wake of an imminent trade agreement between the USA and China. At the close of trading in Frankfurt, the common currency was quoted at 1.1114 dollars, slightly weaker than in the morning. The European Central Bank (ECB) set the reference price at 1.1137 (Wednesday: 1.1075) dollars.

Investors must keep an eye on the British pound during the night and also tomorrow. The elections in Great Britain will provide for high volatility in the market, brokers and major investors expect.

Oil prices rose on Thursday. Until late afternoon, they were able to increase the profits from early trading a bit. One barrel of Brent crude cost 64.41 US dollars. That was 69 cents more than on Wednesday. The price for a barrel of the American variety West Texas Intermediate (WTI) increased by 63 cents to 59.39 dollars.

The gold price was trending higher and higher in the day, up to $1,487 when the news about a potential end of the trade dispute between China and the US hit the markets. Then, the gold price got under pressure and ended the day under $1,469 the troy ounce.

Investors were mostly unimpressed by the first Council meeting of the European Central Bank under the new President Christine Lagarde. As expected, the central bank left interest rates unchanged and did not announce any other monetary policy measures. This comes as no surprise, as Mario Draghi said he had “cemented” the ECB’s monetary policy in the final months of his term of office.

A departure from the ultra-loose monetary policy is therefore not on the agenda for the time being. Instead, some market observers have said that the decision shows that the policy of the steady hand under the new ECB head Lagarde will continue for the time being.

Elections in Great Britain in sight

The elections in Great Britain caused uncertainty in the financial markets. According to surveys, Prime Minister Boris Johnson’s Conservative Party is likely to win an absolute majority of seats in the House of Commons. He then wants to lead the country out of the EU on 31 January. However, the opposition Labour Party has caught up in the past few days.

It cannot be ruled out that there will be a “hung parliament”, a distribution of seats that will not allow either of the two major parties to form a government with their majority. Then even a minority government with Labour leader Jeremy Corbyn as prime minister would be conceivable. Corbyn wants to postpone the Brexit once again to negotiate his resignation deal, on which the British are to vote in a second referendum. The alternative would be to remain in the international community.