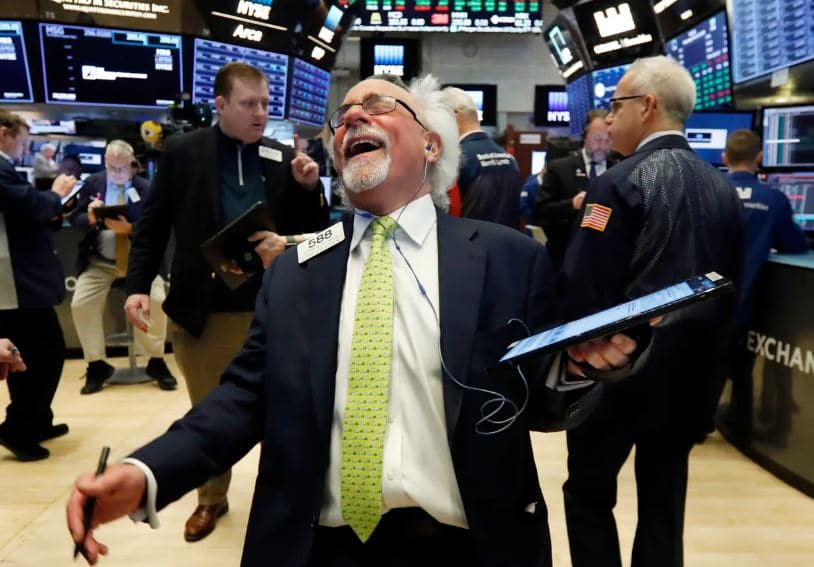 US Markets on fire

The partial trade agreement has been signed, but the next round of negotiations between the USA and China is urgently needed. Also, the US banks have started the reporting season – most of them with success.

Nevertheless, the markets remain in a “tread lightly” position, and the big run is yet to come – at least on the European stock exchanges. In America, on the other hand, the record hunt continues, and prices are skyrocketing.

Both indices climbed to record levels right at the start of trading. The signing of a Phase 1 trade agreement with China in conjunction with strong US economic data created a buying mood.

Although major issues were not resolved, investors seemed to focus on the positive aspects of the agreement. In addition, the Philly Fed Index and initial claims for unemployment benefits came as a positive surprise. And finally, the investment bank Morgan Stanley was also convincing with its quarterly figures.

The European markets did not make any major leaps today. The EuroSTOXX 50 had shown a marginal increase when the starting bell sounded and oscillated around the zero line in the further course of trading. Finally, it ended the day with a small plus of 0.14 per cent at 3,774.14 points.

After a friendly start, the leading German index Dax 30 turned negative. At the end of trading, however, it recorded only a slight loss of 0.02 per cent at 13,429.43 points. In contrast, the TecDAX was able to increase its initial profit and closed 0.84 per cent stronger at 3,129.61 points.

The euro barely got off the ground on Thursday. Most recently, the common currency cost 1.1134 US dollars. In European afternoon trading, the rate had been at 1.1131 dollars. The European Central Bank (ECB) set the reference rate at 1.1169 (Wednesday: 1.1142) dollars.

The Dollar was able to defend its gains after the release of robust data from the US economy. Last week, the number of initial claims for unemployment benefits dropped, while analysts expected a rise. Besides, US retail sales continued to rise in December, while the growth in the non-automotive sector was stronger than expected.

Oil prices rose moderately on Thursday. Most recently, a barrel (159 litres) of North Sea Brent crude cost USD 64.56. That was 55 cents more than on Wednesday. The price of American WTI crude oil rose by 66 cents to 58.47 dollars.

By midweek, crude oil prices were still under pressure after the US Department of Energy reported a sharp increase in the country’s reserves of gasoline and diesel. The agency also announced that US oil production had risen to a new record level. The production boom is mainly due to the controversial fracking technology.

The gold price fell a good 5 US dollars on Thursday and ended trading at around $1,553 an ounce.

Cryptocurrencies also consolidated and lost some value. The big slump is still on hold after most of the top digital assets rose sharply earlier in the week. Current market leader Bitcoin is currently trading at around $8,650. Ethereum costs $150 and XRP $0.2280.

The upward trend in Wirecard shares since the beginning of the week accelerated again on Thursday. The shares of the payment service provider increased in price by 6.06 per cent, closing at 128.55 euros. The recovery had begun with the news of the change at the top of the company’s Supervisory Board.

Some traders cite the covering of empty sold shares as one reason for the price gains. The short seller Coatue Management, for example, recently reduced its short position. Besides, a high valuation of the US Fintech company Plaid by the credit card group Visa could also bring Wirecard’s comparatively low valuation back into the focus of investors.

Renewed accusations by the “Financial Times” regarding the company’s business practices had caused Wirecard’s share price to plunge by more than 20 per cent in mid-October. Since then, the shares had not made it across the 123 eurozone – which they now left behind again.

Christine Lagarde, Europe’s chief monetary watchdog, wants to make the ECB more present at its headquarters in Frankfurt. “As President of the European Central Bank, I want my institution to reflect the spirit of this community and to play an active role in it,” said the President of the European Central Bank (ECB), who has been in office since 1 November, on Thursday evening at the New Year’s reception hosted by the City of Frankfurt.

“The city is a model of how European cooperation can make us stronger,” said the Frenchwoman. “And thanks to her generosity and openness, it is no wonder that I immediately felt at home here.”

The Canadian aircraft and train manufacturer has shocked its shareholders with negative news. The share price on the Toronto stock exchange plummeted by 38 per cent – more than ever before in one day. Due to problems with railway projects and question marks behind the participation in the Airbus A220, the Montreal-based company reduced its earnings forecast by almost half to 400 million dollars before interest and taxes. It was also said that a write-off on the joint venture with Airbus might be necessary.

Two years ago, the European aircraft manufacturer had taken over the majority of the A220 program, for which Bombardier alone had hardly found any customers before. Now the airlines bought the aircraft, but according to the latest information, it will take longer than expected to break even, Bombardier said.