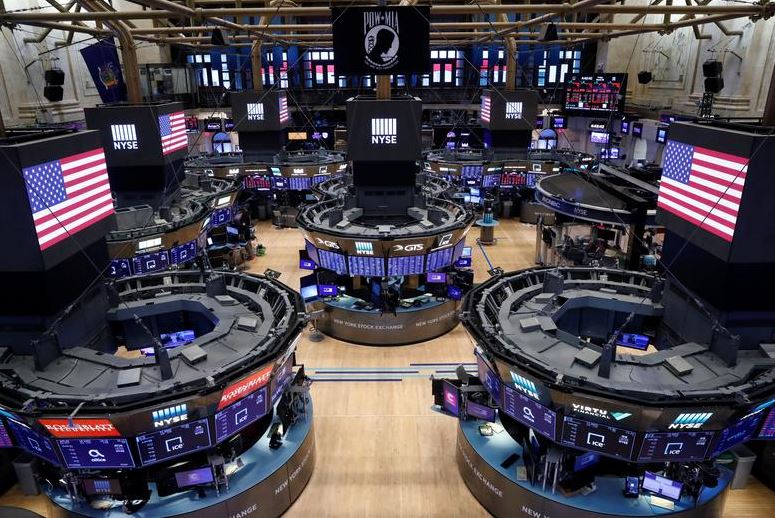 Another slap in the face

After the prospect of an easing of coronavirus restrictions in Germany and several other European countries initially boosted share prices, devastating economic data from the USA later caused new fears.

Investors are now eagerly awaiting the new guidelines announced by US President Donald Trump, with which he wants to herald a return to normality. However, the disastrous economic consequences of the corona pandemic have already become more than clear: Initial claims for benefits from the US unemployment insurance scheme remained at an extremely high level in the week to 11 April. Millions of people applied for unemployment benefits for the fourth week in a row as the pandemic worsened in the USA. Last week, 5.2 million new applications were registered. Within one month, some 22 million people have thus lost their jobs in the USA.

Furthermore, the business climate in the Philadelphia region plunged sharply and marked significantly below expectations.

On Thursday, investors in the USA initially held back. The US leading index Dow Jones 30 Industrial started somewhat firmer, but shortly afterwards was clearly in the red and then repeatedly oscillated towards the zero line. In the end, it rose 0.14 per cent to 23,537.68 points. The technology-oriented selection index NASDAQ Composite also opened trading at a higher level and defended its gains. It closed 1.66 per cent up at 8,532.36 index units.

On the economic side, there was once again more than weak data hailing in, proving the devastating economic effects of the Corona crisis. On the corporate side, the bank Morgan Stanley took the floor to present its balance sheet, which also painted a gloomy picture.

The Asian stock markets thus followed the weak US trend from the previous day. Investors continue to be concerned about the consequences of the coronavirus pandemic after new US economic data had turned out even weaker than expected the day before. Also, US banks started the quarterly reporting season with massive profit declines.

European stock markets increased slightly on Thursday. The EuroSTOXX 50 started with a gain of 0.66 per cent at 2,826.70 points and then expanded on this until it fell back into red territory in the early afternoon. In the end, however, it made it back into the green with a small gain of 0.15 per cent to 2,812.35 units.

The Dax had to relinquish a large part of its daily gains of temporarily 160 points on Thursday. In the final hour of trading, there is a slight recovery, with the leading German index coming out of the session at 10,301 points, 0.2 per cent or 22 points higher. Thus, the chart’s key mark of 10,300 points is just about to be held for the time being.

The euro exchange rate fell again on Thursday due to the massive economic burden of the current crisis. In New York trading, the common currency last traded at 1.0846 US dollars. The European Central Bank had previously set the reference rate at 1.0888 (Wednesday: 1.0903) dollars, which means the dollar costs 0.9184 (0.9172) euros.

Oil prices changed little on Thursday after the recent significant losses. Most recently, a barrel of North Sea Brent cost 14 cents less than the previous day’s price of $27.55. The price for a barrel of the American WTI variety rose by 11 cents to $19.97.

Gold also remained in high demand and at EUR 1,596.48 per troy ounce was more expensive than ever for European investors. In US dollars, the price of the precious yellow metal continued to rise as well. The quotation for a troy ounce climbed recently by about 21 dollars to 1,738 dollars. The price thus rose again somewhat towards a record high, which was reached in 2011 at around 1,920 dollars. The strongest price driver on the gold market remains the corona crisis. Concerns about the economic consequences of the pandemic are currently driving investors into safe havens, which traditionally include the precious yellow metal.

After losing over 4 per cent across the board for the most significant cryptocurrencies yesterday, digital assets were in demand once again today and rebounded sharply. Bitcoin gained 5 per cent to over $7,000, while Ethereum shot up by over 10 per cent to currently $172. Also XRP, which is utilised by the leading Blockchain company Ripple increased in value by over 5 per cent to $0.19.

The European Union has contradicted US President Donald Trump in his criticism of the World Health Organisation (WHO). EU Foreign Affairs Commissioner Josep Borrell has pledged full support to WHO Director-General Tedros Adhanom Ghebreyesus at this crucial moment, the two said on Thursday after a telephone call. The coronavirus pandemic must continue to be combated multilaterally.

Borrell was concerned about the US stop of WHO contributions. He wants to try to mobilise further funds. Following a WHO appeal, the EU had already made 114 million euros available in this crisis.

Trump had arranged for a stop of contributions to the WHO on Tuesday. He blamed the organisation for the many deaths in the crisis and accused it of having worsened the epidemic with mismanagement and reliance on information from China. Thursday’s EU communication said that existing weaknesses should be carefully examined and no effort should be spared to remedy them.

As expected, inflation in Germany weakened significantly in March. Compared to the previous year, consumer prices rose by 1.4 per cent, as the Federal Statistical Office announced today following a second estimate. Economists had expected the first survey to be confirmed. In the previous month, the rate had been 1.7 per cent.

The longer the economy stands still, the more serious the consequences will be, say the experts. For example, Lars Feld, Chief Economist, expects that the German economy will not collapse this year by 4.2 per cent as expected by the five research institutes, but by five per cent and more – in the best-case scenario.