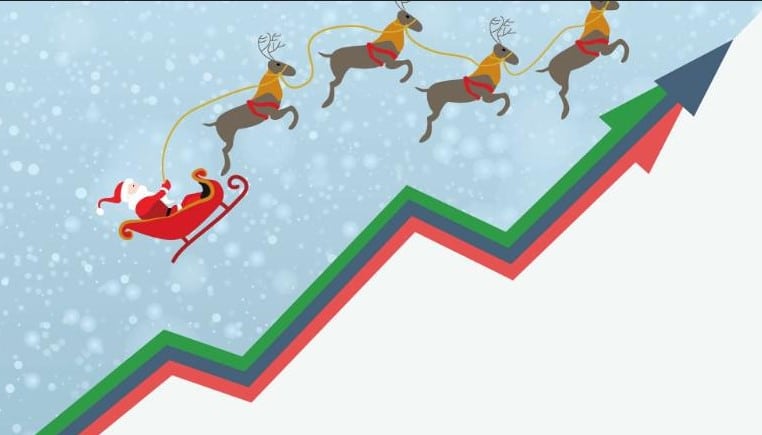 Above all, the expectation of a new economic stimulus package worth around 900 billion US dollars from the US government seemed to have been the main driver of the price gains today. Right now, Republicans and Democrats in Congress are moving ever closer together. However, one must continue to pay attention to the situation, because there have already been enough approaches by the two parties without ultimate agreement.

As a direct consequence of the potential further money supply, the greenback continues its sharp downfall, pushing precious metals and other investments higher. More and more eyes are also turning towards digital assets and especially Bitcoin, which continues to soar to new heights.

US investors were confident on Thursday. The Dow Jones Industrial ended the day up 0.49 per cent at 30,301.79 points. The NASDAQ was also able to make further gains, rising by 0.84 per cent to 12,764.75 points. Both indices thus ended the day at new record highs.

The US Federal Reserve provided for buying on the stock market on Thursday. On Wednesday evening, it announced that it would continue its crisis policy and leave key interest rates unchanged at a low level. Besides, the US economy continues to be supported by billions of US dollars every month.

The Asian markets posted joint gains today. Japan’s benchmark Nikkei index ended the trading day 0.2 per cent higher at 26,807 points. In mainland China, the Shanghai Composite climbed 1.13 per cent to 3,404.87 points while in the Hang Seng index of Hong Kong left the session 0.82 per cent stronger at 26,678.38 index points.

The expectation of a US stimulus package and the promised support of the US Federal Reserve Fed brightened the mood on the Asian markets. Although the central bank did not want to implement any new economic measures, the announcement to keep interest rates low for a long time still provided relief. Nevertheless, the Corona pandemic continues to keep the world on tenterhooks. With the start of the first vaccinations, market participants placed great hopes in an early defusing of the situation.

A good mood prevailed on the European stock exchanges on Wednesday. The EuroSTOXX 50 recorded an increase of 0.47 per cent to 3,559.57 points.

The good indications from the purchasing managers’ indices from the previous day continued to provide a friendly atmosphere on the markets today.

Despite the hard lockdown that began on Wednesday in Germany, the mood on the markets seemed to be good, which was mainly due to the statements made by the US central bank Fed the previous evening. Although the monetary guardians declared that they would not adopt any new economic measures, for the time being, they would keep the key interest rate at its current low level for a longer period.

Traders are hoping that the positive figures will lead to a Christmas rally. On Friday, the big expiry day on the international futures exchanges – also known as the “witches’ Sabbath” – is scheduled, which should also trigger wild price swings.

On the Forex market, the US dollar remains under enormous pressure. As a result, the euro continued to rise in US trading on Thursday, reaching its highest level since April 2018. The common European currency was last traded at 1.2266 US dollars.

On the commodities market, oil prices have climbed to their highest level since the beginning of the pandemic. At times, a barrel of North Sea Brent cost almost 52 US dollars. Oil inventories in the USA are falling. Also, the weaker greenback is causing demand to rise. A barrel (159 litres) of North Sea Brent cost 38 cents more than the previous day at 51.48 US dollars in the evening. At its peak, the Brent price had risen to 51.90 dollars, its highest level since the beginning of March. The barrel price of US West Texas Intermediate (WTI) rose 44 cents to 48.26 US dollars.

Bitcoin and the entire cryptocurrency space held strong after its fierce rise on Wednesday. A Bitcoin currently costs $22,900 while Ethereum is valued at $649, a minus of 2.3 per cent. XRP, on the other hand, increased by a further 2.5 per cent to $0.58.

Consumer prices in the eurozone fell for the fourth month in a row in November, giving the European Bank (ECB) further cause for concern. Year-on-year, consumer prices fell by 0.3 per cent. As expected by economists, Eurostat thus confirmed its first estimate from December 1. As in previous months, low energy prices were again the primary cause.

Initial unemployment benefits claims in the United States rose in the week of December 12, contrary to expectations. Compared with the previous week, the final number of applications rose by 23,000 to 885,000 on a seasonally adjusted basis, according to the US Labor Department in Washington. Economists surveyed by Dow Jones Newswires had predicted a decline to 808,000.

There was also a negative surprise in the Philly Fed Index. The industrial index in the Philadelphia region fell unexpectedly sharply in December. The US Federal Reserve Bank of Philadelphia’s business activity index fell to plus 11.1 points from plus 26.3 in November. Economists surveyed by Dow Jones Newswires had expected only a decline to plus 20.0.

Lufthansa, which has been hit hard by the Corona pandemic, could sell travel services provider Airplus in its search for capital, according to a media report. The subsidiary known for credit cards could fetch up to one billion euros if the market for business travel picks up again, “Manager Magazin” reported on Thursday. The airline did not comment on this specifically. However, a Lufthansa spokesman referred to recent statements by Group CEO Carsten Spohr, according to which the portfolio is being looked at closely. This applies above all to subsidiaries that are not part of the core business. However, there will be no emergency sales.

Coinbase sets the course for IPO

The largest US trading platform for cryptocurrencies such as Bitcoin, Coinbase, is preparing an IPO. The San Francisco-based company announced on Thursday that it had filed a corresponding application with the US Securities and Exchange Commission (SEC).

This sets the course for the first premiere of a major Bitcoin exchange on the public capital market. However, it is still unclear when this IPO will happen and how much money Coinbase wants to raise.

According to the tech blog “Techcrunch”, the cryptocurrency focussed company, founded in 2012, was valued by investors at around 8 billion US dollars in its last financing round.