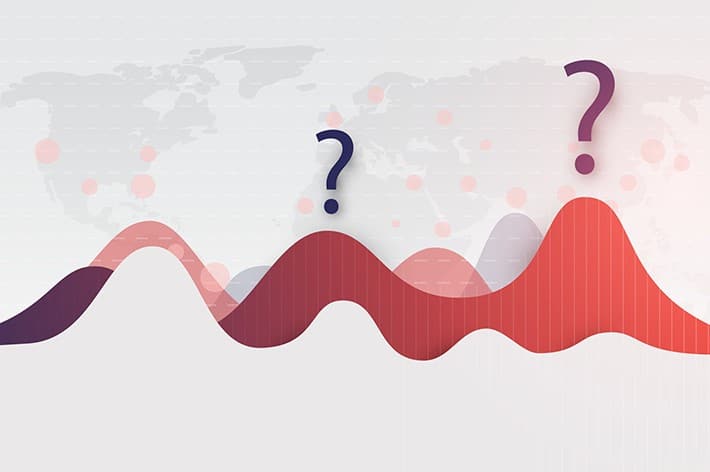 It was not a sell-off in the stock markets today, but investors’ worries about a worsening of the corona situation are putting the brakes on risk appetite all of a sudden. Euphoria has seemingly ended abruptly, and reality is creeping in.

The reason for investors’ reluctance to take new risks is the concern about the highly contagious mutations of the coronavirus currently popping up around the globe. This means that the third wave of corona with all its consequences hangs over the stock market like a sword of Damocles. High infection figures of the new mutations abroad show how dangerous the situation is, even more so because the vaccination campaigns are slow.

Wall Street came under slight pressure on Thursday. The Dow Jones was still up when the starting bell sounded but fell back in the day. The US index ended the day 0.38 per cent lower at 31,494.32 units. The NASDAQ Composite started the day lower and lost 0.72 per cent to 13,865.36 points.

The harsh winter in the USA, which is causing power cuts for many citizens and companies, is currently having a negative impact. The latest labour market data showed a surprising increase in initial jobless claims, further putting a burden on the overall sentiment. At the same time, the balance sheet season attracted attention.

On the Asian stock exchange floor, the most important indices moved apart on Thursday.

Only in Shanghai, where trading resumed for the first time after a week-long break following New Year’s celebrations, the markets showed a slight upward trend. All other markets were burdened by weak sentiment from other regions.

On Thursday, investors on the European trading floors held back. The EuroSTOXX 50 did not get going at the opening and fell back into negative territory after a brief foray into the green. It exited trading 0.52 per cent lighter at 3,680.62 points.

The German benchmark index also continued its consolidation phase on Thursday. The leading index DAX hardly moved and, in the end, fell slightly to 13,886 points – a daily loss of 0.2 per cent and the third losing day in a row. The TecDAX was also weaker after starting the session marginally higher. In the evening, the minus was still 0.92 per cent to 3,511.24 points.

Market participants also kept their powder dry in Thursday’s trade, triggered by rising yields, with the outperformance of banks, commodity stocks, and oil stocks on one side and underperformance of interest-rate sensitive stocks on the other, reports said.

There was no hint of an imminent change in loose monetary policy in the Fed’s meeting minutes (FOMC).

The euro recovered somewhat on the Forex market from the losses of the two previous days. In New York trading, the last price paid for the common currency was 1.2086 US dollars. On Wednesday, the rate had approached the 1.20 dollar mark with a daily low of 1.2023 US dollars.

On Thursday, prices for crude oil from the USA and for North Sea oil initially rose again to their highest levels in over a year. Once again, oil prices were driven by a severe winter onset in the USA with massive shortfalls in US oil production. However, later in the day, oil prices dropped sharply, partially influenced by the overall negative financial market sentiment. The barrel price of Brent crude lost 1.42 US dollars on the daily to $63.47 while WTI oil fell 1.45 US dollars to $60.27 – a daily loss of 2.35 per cent.

Gold remained under precious in commodities trading. After an initial rebound to as high as $1,789, the precious metal dropped back to close at $1,775 per troy ounce.

On the other side of the coin, the cryptocurrencies market remains bullish, with Bitcoin holding above $52,000 a coin. Ethereum gained a further 5.4 per cent to $1,930, and Binance coin captured the number four spot behind Tether with a daily gain of 14.8 per cent to $197. Meanwhile, XRP continues to fall behind and is now only listed as the number 7 cryptocurrency at $0.5370 per coin.

Consumer confidence in the eurozone improved in February. The index calculated by the EU Commission rose by 0.7 points to minus 14.8. Economists surveyed by Dow Jones Newswires had forecast a reading of minus 15.0. For the EU-28, the value improved by 0.8 points to minus 15.7. However, the final index value of consumer confidence for February will not be published until next week.

US monetary officials agreed at their Council meeting on 26-27 January that very low-interest rates and bond purchases are essential for the foreseeable future to support the US labour market recovery.

Fed officials expect the stimulus package passed in December and progress in the COVID-19 vaccination campaign to improve the economy’s outlook. While some representatives expected inflation to pick up in the coming months, they remained sceptical about whether price pressures would be sustained enough to justify a tighter monetary policy.

According to the meeting minutes, the unanimous view was that policy rates should remain near zero.

The US Federal Reserve made no changes to monetary policy at its January meeting. The key interest rate was left at the record low of 0.00 to 0.25 per cent, and the purchases of securities amounting to 120 billion dollars per month were confirmed.

Fed Chairman Jerome Powell has put an end to recent speculation that the tapering programme will soon come to an end by dismissing the debate as “far too premature”. However, with a large stimulus package from the US government and a strong recovery of the US economy in the coming months, this discussion could quickly flare up again.