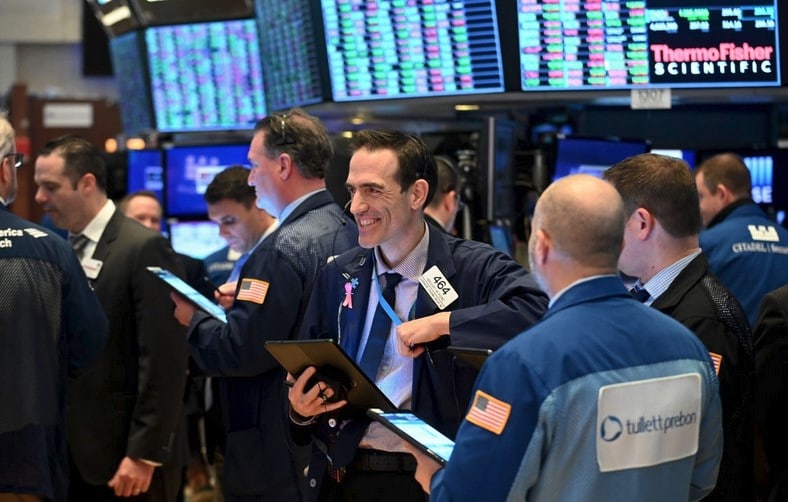 Some heavyweights from the tech sector made a splash on Wall Street today, saving the day for the rest of the stock market. Otherwise, it would have been a rather dull trading day.

In Germany, the DAX marked its sixth record high in a row today with impressive stoicism. It went up to 16,290 points in early trading before profit-taking set in. After such a bull market, it is not surprising that investors also take profits. That is why the upward trend remains intact; it is currently being supported largely by a weak euro and the prospect of continued cheap central bank money in Europe. The indices in Switzerland and France also reached record highs today.

Among the individual stocks, Nvidia stood out particularly positively. Surprisingly good quarterly figures brought the share price a rise of 8.25 per cent to 316.75 dollars. At department stores’ operator, Macy’s, strong quarterly results and the raised annual targets even caused the share price to jump 21.37 per cent to $37.37 – putting the shares on course for a high since 2018.

The stock markets in Asia were still not in a buying mood. The markets continued to fall on Thursday, with high inflation rates worldwide making investors cautious, as did the Corona pandemic, which is raging again with record infection figures in some countries.

In Japan, a report by the business newspaper “Nikkei” partially affected the share prices. The paper had reported that the planned fiscal measures to support the economy could have a record size of the equivalent of 487 billion dollars.

The significant losses in China were attributed to disappointing results from the technology sector. In Hong Kong, Evergrande also weighed on investor sentiment: its shares lost 6.79 per cent to 3,570 HK dollars in trading after the troubled property group sold shares in streaming service HengTen.

Investors took profits on the European stock markets today. The EuroSTOXX 50 closed down 0.39 per cent to 4,383.70 points.

The DAX started trading with a small gain and even set a new record high before running out of steam. It ended the trading day 0.18 per cent lower at 16,221.73 points. The TecDAX opened slightly higher and extended its gains, closing up 0.42 per cent at 3,966.75 index units.

Neither higher inflation nor the rising Corona figures proved to be decisive burdening factors for the markets, while the weak euro continued to provide support at slightly over 1.13 dollars.

In US trading, the euro continued to recover significantly on the foreign exchange market and was trading at 1.1370 dollars. In the morning, the euro was still trading significantly lower in European trading. The main reasons for the low euro rate are the ECB’s still very loose monetary policy and the tense corona situation in many euro countries.

Oil prices on Thursday extended their markdowns of the past few days. Speculation about a partial release of national oil reserves by major economies was the main reason for the price declines of the past few days. On Thursday, China announced that such a step was planned, but no details were given. It would be the second time in a few months that China has drawn on its oil reserves. In Asian trading, prices for North Sea oil and US crude fell to one-month lows. However, prices recovered somewhat by the end of the day. A barrel of Brent North Sea crude last cost 80.18 US dollars, 10 cents less than the previous day, while a barrel of US West Texas Intermediate fell by 45 cents to 77.91 dollars.

The gold price pulled back slightly from yesterday’s high, closing at $1,858 per troy ounce.

Cryptocurrencies were hit yet again and continued their downward trend. As usual, Bitcoin pulled almost the entire market down with it, even though each digital asset should be seen as independent with their individual use case. Bitcoin ultimately dropped by 6 per cent to $56,500, while Ethereum lost 6.2 per cent to $3,970. Binance Coin dropped 7.6 per cent to $530, Solana shed 10.2 per cent to $193, while Cardano (ADA) and XRP decreased by 4.3 per cent to $1.78 and $1.04, respectively. The only daily gainer was Algorand, popping up by 10.8 per cent to $1.82. Intraday, it shot up as high as $2.55.

The situation in the US labour market improved slightly last week. Initial jobless claims fell by 1,000 to 268,000 over the week, the Labour Department reported today. Analysts had on average expected a more significant drop to 260,000 claims. Although many US citizens are still without a job due to the corona crisis, the situation in the labour market has improved significantly after a slump in the first Corona wave in spring 2020. However, weekly applications for assistance are still at a higher level than before the start of the crisis.

The business climate in Philadelphia, on the other hand, brightened noticeably in November. The regional central bank’s indicator for industry (Philly Index) rose by 15.2 points to 39.0 points, as the central bank announced today in Philadelphia. Economists had only expected an increase to an average of 24.0 points.