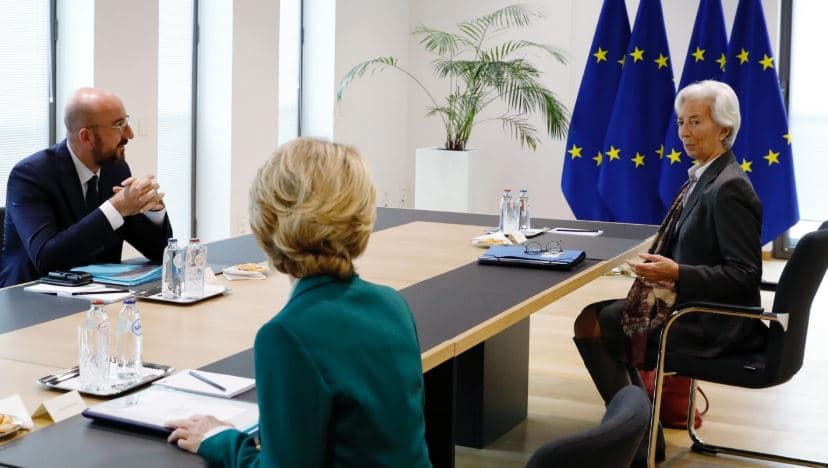 In the fight against the economic consequences of the coronavirus pandemic, the European Central Bank has announced an emergency bond purchase programme worth 750 billion euros. This will involve public and private sector securities, as the ECB surprisingly announced on Thursday night. With the purchase programme, the ECB wants to help prevent further distortions on the financial markets as a result of the coronavirus crisis, which would put additional pressure on the economy.

But also other central banks are combating the biggest stock market crash of all times with all their might. Liquidity aid, money injections, bond purchases and if necessary even more to save companies and investors worldwide. Today, Thursday, these measures showed their effect – at least a little bit.

The Dow Jones started off lower, changing signs several times but then managed to establish itself in the black. In the end, the Dow was 0.95 per cent higher at 20,087.40 points. The NASDAQ Composite showed little movement at the official stock market launch, then slid into the red at first, but then rose clearly into the profit zone until it closed 2.30 per cent stronger at 7,150.50 units.

Investors in the USA are currently caught between extremely negative economic data and bold stimulus packages from central banks around the world.

Asian stock markets also showed a weaker trend on Thursday. Concerns about the economic consequences of the corona crisis continue to weigh on the markets. In Japan, the Nikkei-225 leading index lost one per cent to 16,552 points. The stock exchanges in China and Hong Kong also recorded price losses. The CSI of the Chinese mainland stock exchanges fell by 1.8 per cent. In Hong Kong, the most recent markdowns were somewhat higher at the Hang Seng, at a good two per cent.

The Japanese central bank has again intervened in the market in the fight against the consequences of the virus. The Bank of Japan (BoJ) is offering banks another 4 trillion yen (around 34 billion euros) of liquidity and is expanding its bond purchase program by 1.3 trillion yen, it announced.

European stock markets stabilized on Thursday. The EuroSTOXX 50 was already firmer at the opening and was able to increase its gains significantly. It closed the session 2.86 per cent up at 2,454.08 points.

Oil prices started to recover on Thursday after the recent slide. Prices have recovered somewhat after numerous emergency measures taken by leading central banks in the fight against the economic consequences of the corona crisis. Most recently, a barrel of North Sea Brent cost USD 28.03. This was 3.15 dollars more than the previous day. The price for a barrel of the American WTI variety rose by 4.52 dollars to 24.86 dollars.

Meanwhile, the price of gold fell by a little more than 1 per cent to currently $ 1,471 an ounce.

Following the massive drop in prices on the Vienna Stock Exchange due to coronavirus concerns, the Austrian Financial Market Authority has now banned bets on covered share price losses for one month. France, Spain, Italy and Belgium had previously already prohibited short selling in whole or in part. Since the beginning of March, the Vienna Stock Index ATX has lost more than 40 per cent of its value.

Ifo-Index at its lowest level since 2009

The current crisis is fuelling concerns about a severe recession in the German economy. The Ifo business climate index fell to 87.7 points in March after 96.0 points in February, as the Munich-based Ifo Institute announced on Thursday after preliminary results of its survey of around 9,000 managers. This is the sharpest decline since 1991 and the lowest value since August 2009. “The German economy is plunging into recession,” said Ifo President Clemens Fuest.

The interest rate hike appears unusual in the current environment. Many central banks had massively eased their monetary policy because of the coronavirus crisis. Most recently the European Central Bank (ECB) in the night of Thursday. However, the Danes’ goal is to maintain the exchange rate peg to the euro.

The Danish krone is one of several small currencies that have recently come under pressure in the crisis. Investors have been betting on more liquid currencies in the face of high uncertainty. Denmark’s krone has been “under pressure against the euro for a long time,” said Las Olsen, chief economist at Danske Bank. “The financial market stress that has emerged in recent days has increased downward pressure.”