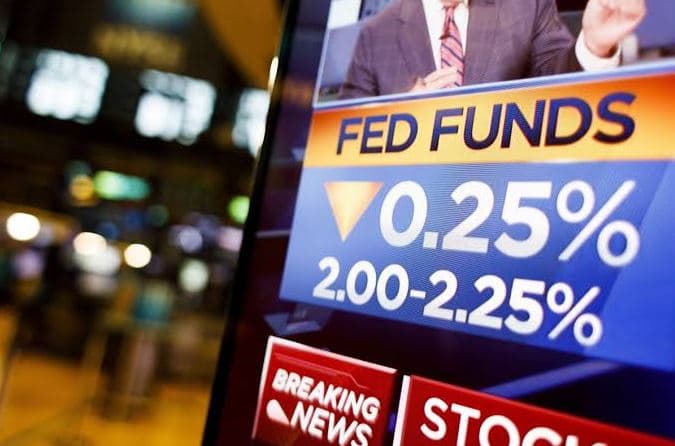 Fed rate cut – and now what?

Wall Street is initially responding to the 25 basis point interest rate cut by the Federal Reserve, which turned out to be as expected, with markdowns.

After the announcement of the decision, the leading index Dow Jones plummeted and was trading around 0.6 per cent lower at the time of going to press. As expected, the Federal Reserve lowered key interest rates by 25 basis points to a new interest rate corridor of 1.75 to 2.00 per cent in the evening.

This is the bank’s second rate cut in a short space of time, most recently on 31 July interest rates were also cut by 25 basis points. This is the Fed’s reaction to the recent rise in economic concerns, even though economic data in the USA remain robust.

However, the decision was not unanimous: Three currency guardians voted against the reduction. The Fed last lowered its key interest rate at the end of July – for the first time since the 2008/09 financial crisis. Seven out of 17 currency watchdogs also signalled that they want to lower the interest rate screw once again this year. In the event of an economic downturn, further rate cuts could become necessary, said central bank chairman Jerome Powell following the latest interest rate decision.

The stock markets in the Far East show no common direction on Thursday.

The European stock markets are starting stable this Thursday morning. The EuroSTOXX 50 stays at its 3,520 points level and the German leading index DAX 30 at around 12,390 points.

The US dollar is off its highs against major pairs as markets digest the Federal Reserve’s decision. The euro holds above the mark of 1.10 US dollars and rises to 1.1039 US dollars. The Aussie dollar has lost ground and dipped below the $0.68 handle after the unemployment rate rose to 5.3%. However, the economy gained more jobs than expected in August, and the participation rate has risen as well.

The price of gold took a strong hit after the Fed news but recovered somewhat and is trying to recapture $1,500.

Oil prices rose slightly in early trading on Thursday. In the morning one barrel (159 litres) of North Sea Brent cost 63.72 US dollars. That was 12 cents more than on Wednesday. The price for a barrel of the American West Texas Intermediate (WTI) rose by 17 cents to 58.28 dollars.

After the escalation, due to the drone attacks on Saudi Arabia on the weekend, the situation on the oil market has calmed down somewhat. Oil prices have fallen since Tuesday, but are still higher than before the attack. Saudi Arabia and the International Energy Agency (IEA) have apparently managed to calm investors.

According to the state-owned oil company Saudi Aramco, about 40 per cent of the oil production in the attacked large-scale plant has been restored. Full capacity should be available again by the end of September. Meanwhile, the IEA referred to the immense crude oil reserves of its member countries, which is estimated at 1.55 billion barrels. The global oil market would thus remain well supplied.

Most major cryptocurrencies are trading lower on Thursday morning after some profit-taking and the Bitcoin price being pushed below the psychological $10,000 mark. One Bitcoin currently costs approximately $9,900, one Ethereum $208 and one XRP $0,2920.

Following a pilot phase, the Spanish bank Santander is now bringing its Openbank digital offering to Germany. The company announced in Berlin on Wednesday that the online bank, which was previously only available in Spain, will also be launched in the Netherlands and Portugal this year.

Santander expects the internationalisation of its online offering to double its customer base to around two million. Currently, Openbank counts over 1.2 million customers in Spain and has deposits of ten billion dollars, said Openbank boss Erze Szafir Holcman. Thirty-eight per cent of customers used Openbank as their primary bank.

The major Spanish bank is considered the most valuable bank in the eurozone, with a market capitalisation of around 70 billion euros. In Germany, Openbank puts the company in direct competition with the Berlin App-Bank N26, which has been offering account management via smartphone since January 2015.

The planned independent Facebook committee, to which users can complain about what they consider to be an unjustified deletion of content, is taking shape. The online network wants to attract around 40 experts, and it should be able to work with at least eleven. Facebook hopes to be able to present the first members this year. The first disputes could be dealt with at the beginning of next year, the company explained on Tuesday.

The plan is for user complaints to be examined in groups of five committee members. Their decisions will be binding on Facebook and quickly implemented.

The US bank JPMorgan has raised the price target for HelloFresh from 14 to 18 euros and left the rating at “Overweight”. Although many would have a cautious look at the business model of the supplier of cooking boxes, this would deliver good results, analyst Marcus Diebel wrote in a study available on Thursday. The growth and profitability are strong, the valuation attractive.