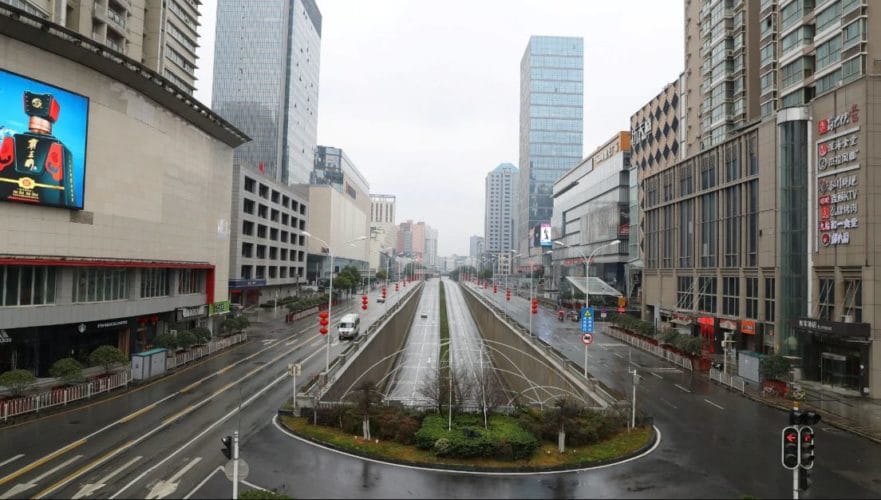 Hope initially arose today after the number of new infections in China declined. However, the counting method was changed. The new counting method sounds too much as if the wish is the father of the thought here. Whether this wish will be fulfilled is unclear, especially since China does not allow foreign experts into the country.

On the one hand, investors are still hoping that the situation in China will calm down and that there will at most be an economic dent in the first quarter. But, on the other hand, the uncertainty remains, as figures from the European airline industry showed today.

The French-Dutch airline Air France-KLM, for example, is expecting high charges due to the coronavirus. Between February and April, the consequences of flight cancellations and lower utilisation of aircraft are likely to have an operational impact of 150 to 200 million euros, the company announced in Paris on Thursday.

The share price fell back, and at minus 2.50 per cent, the shares of competitor Lufthansa were also among the weakest stocks in the German leading index Dax today.

Even the oh-so-strong New York stock market turned more negative on Thursday. The Dow Jones had already started trading with markdowns but was able to close to zero at times. For most of the trading day, however, it remained in the red, closing 0.44 per cent lower at 29,219.13 points. The NASDAQ Composite tech stocks index also fell slightly. Initially, it also moved in a narrow range around the previous day’s closing price, but ultimately recorded losses of 0.67 per cent to 9,750.96 units.

Investors continued to focus on the developments surrounding the corona epidemic and its potential economic impact. As expected, China had reacted to the events by lowering interest rates during the night. However, the measures were considered too tentative.

Meanwhile, the US Federal Reserve had expressed optimism about the US economy the previous evening. However, it was still necessary to carefully monitor the developments surrounding the coronavirus. Economic data published before the stock exchange was convincing. The Philadelphia Fed Index for January rose to 36.7, while analysts had expected a decline to 8.0. In contrast, the initial weekly applications for unemployment benefits, at 210,000, were as expected.

On the Asian stock markets, the Japanese leading index Nikkei 225 rose on Thursday by 0.3 per cent to 23,479 points. Concerning China, the trend was mixed. While the CSI-300 index, recently increased by almost two per cent, the Hang Seng in Hong Kong fell by nearly half a per cent.

Initially, the Asian stock markets rose sharply after China announced that they would lower the interest rates. However, the trend didn’t last long, and especially the Chinese indexes went back into selling mode.

Europe’s stock markets fell on Thursday. The focus was on a flood of quarterly figures. The reporting season had its second strongest day. More and more companies are warning of the financial impact of the coronavirus, which triggered profit-taking on Thursday.

The Dax opened slightly easier. After a short excursion to the zero line, it was somewhat in the red most of the time. By the end of trading, however, it had increased its loss once again – so in the end, a discount of 0.91 per cent to 13,664 points remained on the price board. Meanwhile, the TecDAX fell by 0.96 per cent to 3,264.28 units, after a marginal increase at the start.

The euro exchange rate fluctuated on Thursday. It temporarily made up for interim losses with a three-year low of 1.0778 dollars, only to slide back into the red. Most recently the common currency was traded in New York at 1.0790 dollars. The European Central Bank (ECB) had previously set the reference rate at exactly this level (Wednesday: 1.0800).

The recovery in oil prices only stalled temporarily on Thursday. A barrel (159 litres) of North Sea Brent crude last cost USD 59.70. That was 58 cents more than the previous day. The price of American WTI crude oil rose by 88 cents to 54.17 dollars. Most recently, data on the development of oil reserves in the USA provided new impetus for oil prices. Last week, crude oil inventories had unexpectedly increased slightly by 0.4 million barrels to 442.9 million barrels.

Meanwhile, the high demand continues to drive the price of gold, the crisis currency, higher. Gold has now reached its highest level in seven years. Among other things, concerns about the economic consequences of the coronavirus crisis are causing investors to invest more heavily in the precious metal, which is valued by the market as a safe investment haven.

The price of a troy ounce rose to 1,622 dollars. The precious metal was thus more valuable than at any time since February 2013. Converted into euros, the price of gold even reached a new record high at over 1,500 euros.

Cryptocurrencies saw another sell-off, especially during the Asian session, with dips of often around 5 per cent in just minutes. The reasons behind those flash crashes remain unclear but continue to smell like market manipulation. Since the overall market capitalisation of digital assets is only approximately 300 billion dollars, big players seem to be able to push prices in any direction they please at any given moment.

Complicated negotiations lie ahead for Europe’s heads of state and government at their special summit, which begins this Thursday in Brussels. They will discuss the EU’s billion-euro budget for the next seven years. The ideas of German Chancellor Angela Merkel and her counterparts were very far apart before the meeting. This applies both to the volume of the budget and how it is used.

In the fight against the economic consequences of the virus epidemic, the Chinese central bank has reduced a further interest rate. On Thursday it lowered the one-year reference rate Loan Prime Rate (LPR) to 4.05 per cent from 4.15 per cent the previous month and the five-year reference rate to 4.75 per cent from 4.8 per cent. As a precautionary measure, the central bank recently reduced the interest rate for medium-term loans (MLP) again by ten points to 3.15 per cent. This is intended to facilitate credit transactions amounting to billions.

According to earlier statements by the central bank, the epidemic will only have a limited impact on the economy. Moreover, China does not want to be diverted from its growth targets.

The major US bank Morgan Stanley takes over the American E*Trade for 13 billion dollars.

With this acquisition, Morgan Stanley is significantly expanding its asset management business, the bank explained on Thursday. Together, the companies manage 3.1 trillion dollars in customer funds and have 8.2 million private customers. The purchase price will be paid entirely in shares. E*TRADE shareholders are to receive 1.0432 Morgan Stanley shares for each of their shares.