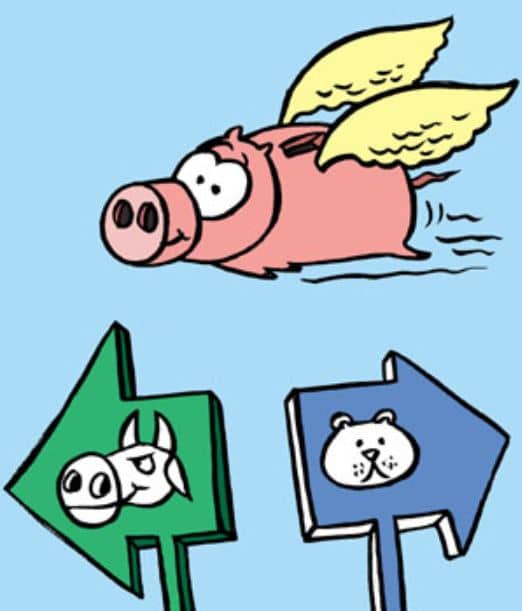 According to many experts, the market is currently lacking real price drivers. Although global markets have already recovered considerably since the March low in the wake of the corona crash, investors are currently wavering between economic pessimism and hopes of a rapid economic recovery in the face of the pandemic and its economic impact.

More and more spoilsports are venturing into the limelight because of this development of stock market prices, warning of a second wave of infection and an accompanying second wave of selling on the markets.

Today’s price losses, however, are rather due to the recently flared up US-China crisis. Thus, a new verbal attack by US President Trump against China’s ruler Xi caused uncertainty among investors. Disastrous unemployment figures from the USA continued to weigh on the markets as well.

Wall Street posted losses on Thursday. In trading driven by economic data, the Dow Jones started near the previous day’s close and gave up as trading progressed. At the closing bell, it lost 0.41 per cent to 24,474.12 index units. The tech index NASDAQ Composite also started at the previous day’s level and ended the day down 0.97 per cent to 9,284.88 points.

The number of unemployed in the USA continued to rise at an alarming rate. Last week, more than 2.4 million people applied for unemployment benefits for the first time. In the previous week, there had been almost three million new applications. Since the coronavirus pandemic in the USA came to a head in March, nearly 39 million people have lost their jobs, at least temporarily. Besides, the Philly Fed index rose in May by 13.5 points month-on-month to minus 43.1 points. Economists had expected minus 40.0 points.

Hopes for the early success of a vaccine against the novel coronavirus also diminished somewhat on the Asian stock markets on Wednesday. China’s stock exchanges, in particular, followed the negative lead from Wall Street. Also, the recent reoccurring trade conflict with the US has put a damper on sentiment.

Furthermore, the crisis caused exports in Japan to collapse. Exports in April fell by 21.9 per cent compared with the same month last year. Analysts had, however, predicted an even sharper decline of 22.2 per cent.

European stock exchanges also reported losses. The EuroSTOXX 50 had already entered the market and remained on red ground afterwards. Finally, it went 1.27 per cent lower at 2,904.89 points into the end of the day.

In the foreign exchange market, the Euro could not maintain its jump to over $1.10 from the early trading hours. In the US trading session, the Euro rate slipped to $1.0956.

The oil price rally continued on Thursday, and the price of a barrel of US grade WTI rose by 1.8 per cent to $33.71. The cost of Brent rose by 1.4 per cent to over 36 dollars a barrel.

Similarly, the digital asset class took a strong hit today. Bitcoin lost almost 5 per cent and is currently valued just above $9,000. Ethereum even lost more than 5 per cent and slipped below the $200 mark. XRP was a little less fragile and “only” dropped by 3.6 per cent to $0.1960.

The recession in the private sector in the eurozone weakened somewhat more than expected in May. The aggregate purchasing managers’ index (PMI) of output in industry and services calculated by IHS Markit rose to 30.5 points from 13.6 points in April. Economists had expected 24.0 points. However, the data was unable to help Europe’s stock markets get back on their feet.

In general, early economic indicators are increasingly pointing to economic recovery. The fact that the economies around the world have slipped or will slip into recession in the first and second quarters has long been priced in on the stock market. Hopes are now resting on a recovery of the economy in the third quarter, as recently fueled by Fed Chairman Jerome Powell for example.

The central bank wants to use lower interest rates to support the weakening economy in the Corona crisis. Loans for businesses and consumers are to become more affordable. The key interest rates are currently significantly below the inflation rate.

From the beginning of June, (Corona) beer will be brewed again in Mexico City for the first time in almost two months, announced Mayor Claudia Sheinbaum. The most popular Mexican brand – at home and abroad – is Corona. After production for the domestic market was discontinued on April 6 as part of the measures against the coronavirus, the beer shelves in stores across the country have been getting emptier and emptier in recent weeks. Corona beer has, however, continued to be brewed for export to the USA by the Mexican Grupo Modelo, in which the drinks giant AB Inbev holds a majority stake.