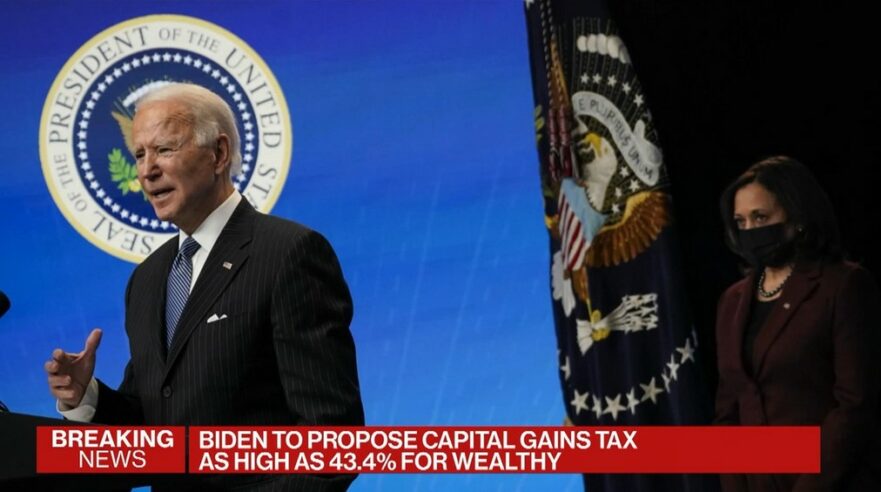 US President Joe Biden brought dark clouds into the otherwise rather friendly stock market weather today with his announcement of a significant increase in capital gains taxes.

So far, Biden has been a darling of Wall Street. Since his election victory in November 2020, the Dow Jones index has gained almost 20 per cent. But now, the Democrat is suddenly becoming a spectre for investors. Because according to the Bloomberg news agency, Biden wants to propose a capital gains tax of 43.4 per cent for wealthy US Americans. This would roughly double the current tax rate.

Biden’s climate protection offensive only caused renewable energy providers and investors to jump for joy. Biden announced to at least halve US greenhouse gas emissions by 2030 compared to 2005.

In contrast, ECB President Christine Lagarde countered fears that the central bank would soon take its foot off the accelerator and gradually reduce the gigantic bond purchases. Lagarde said the ECB Governing Council had not discussed scaling back purchases via the Corona PEPP programme after the central bank’s interest rate meeting in Frankfurt. It was simply too early for that. Any adjustment of the programme would depend on the economic development and not on calendar dates.

Wall Street ultimately posted heavy losses today after a friendly start. The Dow Jones index fell by 0.94 per cent to 33,814.91 points. The NASDAQ Composite also fell after a barely changed start and ended the session 0.94 per cent weaker at 13,818.41 points.

Investors took a breather after Wednesday’s solid gains. Concerns about still-high COVID-19 infections worldwide offset a predominantly positive earnings outlook from US companies. However, US President Joe Biden’s tax plans were the biggest culprit in the US stock markets sliding deeper into negative territory.

On the other hand, most of the stock markets in the Far East recovered on Thursday from their previous day’s decline. The Japanese benchmark index Nikkei climbed by 2.38 per cent to 29,188.17 points, while China mainland’s Shanghai Composite was 0.23 per cent weaker at 3,465.11 points. The Hang Seng rose 0.47 per cent to 28,755.34 index points on Hong Kong’s stock exchange.

The rising numbers of corona infection figures in parts of Asia, such as in India and partly in Japan, moved somewhat into the background. Analysts saw more upside potential as investors turned their focus back to the well-run reporting season and the economic recovery.

The upward trend in the Chinese heartland remained intact, Dow Jones analysts said. On the other hand, highly valued stocks are likely to come under increased pressure from the second quarter onwards as central banks cut liquidity in the market.

The European stock indices continued their upward trend today. The EuroSTOXX 50 opened with a small gain and ultimately ended the day 0.97 per cent higher at 4,014.80 points.

Encouraging company reports attracted more investors back to the European stock markets. Renault, Ricard Pernod and Orange came into focus on Thursday as the reporting season got underway.

On the other hand, the increasing number of coronavirus cases in some countries dampened the buying mood somewhat. The most important event of the day, however, was the interest rate decision of the European Central Bank: the central bank did not change its monetary policy course. It was said beforehand that there was currently no need to do so.

On the foreign exchange markets, too, the focus was on the ECB with its interest rate decision. The euro continued to rise but later came under pressure as the US dollar was increasingly sought as a safe haven. At the end of the day, the euro was trading at 1.2003 US dollars. Other than that, the flight of investors from the Turkish lira continues, given the political tensions between Washington and Ankara. The dollar currently trades for 8.357 lira on Thursday, 2 per cent more than the previous day.

Oil prices recovered somewhat today from their heavy losses of the previous days. With 11 cents more, a barrel of Northsea Brent cost 65.43 US dollars. WTI oil also rose by 11 cents to 61.46 dollars.

With a sharp drop in the equity markets and investors taking flight into the greenback, the gold price was also pressured and dropped in the day from $1,793 to $1,783 a troy ounce.

Lastly, the cryptocurrency market came under selling pressure, too, with altcoins following Bitcoin’s fall. BTC ultimately lost 4.2 per cent to just $52,000, while XRP, Binance Coin and Cardano followed suit and dropped between 4 and 7 per cent. Only Ethereum held strong again and even captured gains of 2.5 per cent to $2,434. During the day, Ether even climbed above $2,600, reaching a new all-time high.

The corona crisis and the governments’ fight against the consequences of the pandemic have caused public debt in Europe to rise significantly. In the 19 euro countries, total debt rose from 83.9 per cent of economic output (GDP) in 2019 to 98.0 per cent last year, according to Eurostat, the statistics office, in Luxembourg on Thursday. The public budget deficit, i.e. the surplus of expenditures over revenues, amounted to 7.2 per cent after 0.6 per cent in the previous year.

In the USA, the number of initial claims for unemployment benefits decreased in the week ending 17 April, contrary to expectations. Compared to last week, the number of claims fell by 39,000 to 547,000 on a seasonally adjusted basis, as announced by the US Department of Labor in Washington. This is the lowest level since the week ended 14 March 2020, whereas economists surveyed by Dow Jones Newswires had forecast an increase to 603,000. In the week ended 10 April, 3.674 million people received unemployment benefits. This was a decrease of 34,000 from the previous week.

The economic outlook in the USA brightened surprisingly strongly in March. The composite index of early leading economic indicators rose by 1.3 per cent compared to the previous month, as the private research institute Conference Board announced in Washington on Thursday. Economists had, on average, expected an increase of only 1.0 per cent.