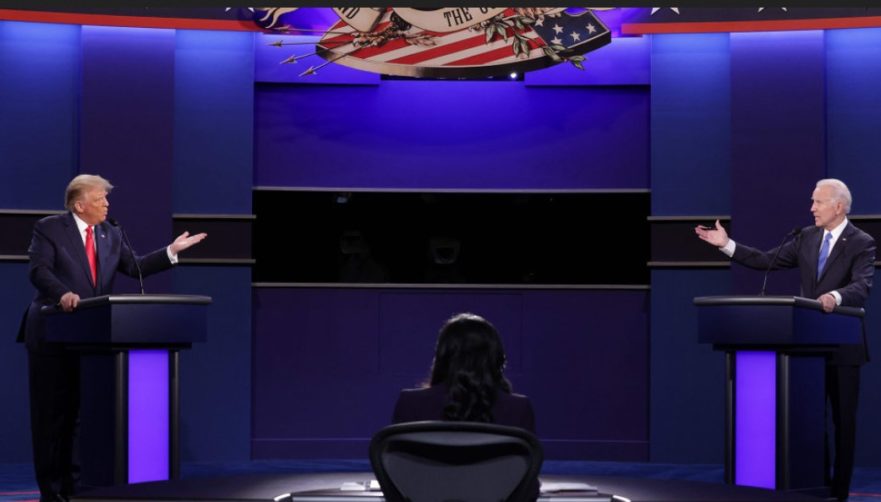 The more and more dramatized presentation of the corona new infection figures is sticking further into the bones of the investors. Although the most important global indices made up for the heavier losses in earlier trading, no further progress was made in today’s highly volatile trading sessions.

While the stock market bulls are counting on new impulses from New York, the corona situation is becoming more and more dramatic, making a possible lockdown scenario more real. In Ireland and the Czech Republic, the governments have already pulled the emergency brake. The RKI has again expanded the risk areas. Among others, the whole of Switzerland, the whole of Poland and eight out of nine Austrian federal states (except Carinthia) are considered risk areas.

Now traders and investors are waiting for the next and last US presidential TV debate between Donald Trump and Joe Biden, which will take place tonight.

Wall Street did not find a clear trend on Thursday. The Dow Jones opened 0.05 per cent lighter at 28,197.42 points and hovered around the previous day’s close for a long time. In late trading, however, the stock market barometer gained 0.54 per cent to 28,363.66 points. The technology-heavy NASDAQ Composite also changed its direction several times. In the end, it increased by 0.19 per cent to 11,506.01 index units.

The US presidential elections and the negotiations for a new US economic stimulus package remain in the focus of investors. Traders are also keeping a close eye on the further rise in corona infection figures.

Besides, market participants are turning their attention to a whole series of quarterly reports for the past quarter of the year – including US electric carmaker Tesla, which had already presented its figures the evening before.

Rising corona infection figures in many parts of the world, uncertainty surrounding the US election and the ongoing tug-of-war over another US economic stimulus package weighed on Asian stock markets on Thursday. The Japanese leading index Nikkei 225 closed 0.7 per cent lighter at 23,474 points. The CSI 300 on the Chinese mainland stock exchanges, fell by 0.8 per cent and the Hang-Seng Index in the special administrative zone of Hong Kong lost 0.2 per cent.

After the daily low of the Dax 30 was at 12,345 points in the morning, and thus around 1.6 per cent below the close of the previous day, the leading German index was able to recover and closed 0.1 per cent lower at 12,543 points.

But the impression that there was not much going on with such a small change is deceptive. After all, it was a veritable rollercoaster ride that the leading German index took today, reflecting that there is currently a lot of nervousness among investors.

Among the individual stocks, Continental was one of the biggest losers in the Dax 30, after the company reported a billion euro loss in the third quarter yesterday. Adidas lead the index after sales rumours about its subsidiary Reebok gave the stock a solid boost. The shares of the Darmstadt-based pharmaceutical company Merck were also in demand.

The euro remained under pressure on the currency market on Thursday, also due to rising corona infections in Europe. Most recently, the common currency cost 1.1819 US dollars. In early European business, it was still quoted around half a cent higher.

Meanwhile, the Turkish lira declined to a new record low against the dollar, continuing its recent slide. Surprisingly, the Turkish central bank did not raise its key interest rate, leaving it at 10.25 per cent. The Turkish lira is one of the currencies with the strongest exchange rate losses this year. The reasons range from high inflation in the country and the burdens of the Corona crisis to political risks such as the numerous military interventions in the region. President Recep Tayyip Erdogan had always spoken out against interest rate hikes.

The price of gold plummeted by 1 per cent to almost exactly $1,900 per troy ounce.

Cryptocurrencies continued their upward momentum and rose again. Bitcoin climbed by 0.2 per cent to just below $13,000 while Ethereum appreciated by 2.1 per cent to 417. XRP hovered around the same mark as the previous day, which was $0.2580.

The GfK consumer confidence survey provided a picture of consumer sentiment in Germany. According to the survey, the increased number of corona infections is once again driving fear sweat into the foreheads of German consumers. Rolf Bürkl of the Nuremberg-based consumer research company GfK said that the buying mood of Germans had dropped significantly in October. The consumer climate fell to minus 3.1 points, following a decline of 1.7 per cent in the previous month.

Wall Street and world stock markets received a fundamental boost from new data from the US labour and housing markets. The weekly data from the labour market showed a decline in initial applications by 55,000 to 787,000. This is better than recently expected, with experts presuming 870,000 applications.

Despite the decline, the number of applications for government support remains very high by US standards: the more meaningful four-week average was 811,250. The new applications reflect the short-term development of the labour market in the world’s largest economy. Immediately before the corona pandemic, the number was usually around 200,000 per week. All in all, these figures are also significantly better than expected.

The IT security company McAfee has raised nearly $620 million from investors on its return to the US stock market. McAfee shareholders raised another $120 million by selling shares. McAfee set the issue price of the shares at $20 in the night to Thursday – and thus rather closer to the lower end of the targeted range of $19 to $22.

The world’s largest beverage producer Coca-Cola continues to suffer from the corona crisis but performed better than expected in the third quarter. Sales in the three months to the end of September fell by only nine per cent to 8.7 billion dollars. In the second quarter, there had been a decline of 28 per cent. The opening of restaurants, stadiums, cinemas and other public facilities helped Coca-Cola in the past quarter.