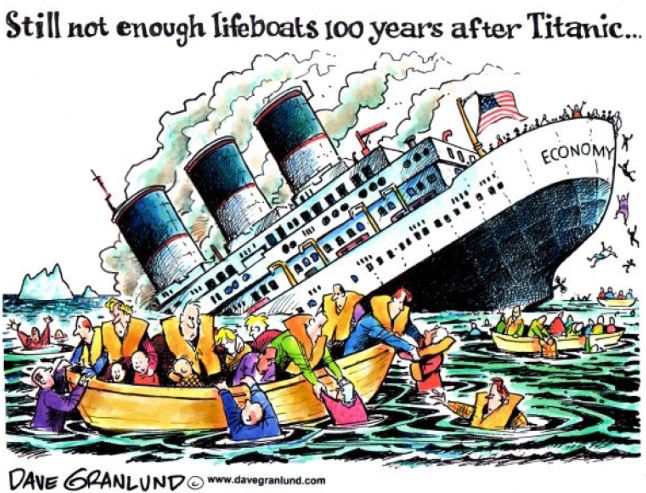 EU heads of state and government met for a video summit this Thursday. A 540 billion euro aid package was adopted. German Chancellor Angela Merkel remarked that Germany must prepare for a higher EU contribution. She stuck to her rejection of a communalization of debts, so-called Euro- or Corona bonds.

Specifically, the EU Commission is to work out a plan for economic reconstruction after the Corona crisis on behalf of the EU heads of state and government. The Brussels authority has been commissioned to do so, said EU Council leader Charles Michel on Thursday after an EU video summit.

He said the EU Commission should determine the concrete needs and quickly present a proposal. In this context, it should also be specified how the reconstruction fund can be linked to the multi-year financial framework for the years 2021 to 2027.

Markets reacted positively to the news of more and more money being injected into the system all around the globe.

On the US stock exchanges, however, the initial gains in Thursday trading melted away. The US leading index Dow Jones 30 Industrial closed the day with a narrow plus of 0.15 per cent at 23,515.26 points. It had opened 0.29 per cent higher at 23,543.09 points and had then moved far into the profit zone at times. The technology-oriented selection index NASDAQ Composite closed at 8,494.75 points, almost unchanged from the previous day’s close. Here, too, the gains from early trading could not be defended. The US tech index started the day with an increase of 0.39 per cent at 8,528.84 points.

After recovering significantly from the slump in oil prices on Wednesday, Wall Street initially rose slightly on Thursday as well. However, some of the gains melted away completely in late trading, as a report in the “Financial Times” showed that Gilead Sciences’ drug Remdesivir has disappointed in a first study. The drug was previously considered a promising candidate in the fight against COVID-19.

Besides, more than four million US citizens filed for unemployment benefits last week.

The purchasing managers’ indices in the eurozone fell massively in April, marking new lows – but this only temporarily weighed on the markets. Also on the agenda was the EU summit, which is expected to set out a plan for economic recovery after the Corona crisis.

The European stock exchanges presented themselves friendly on Thursday. The EuroSTOXX 50 was up in early trading but fell back to its previous day’s closing level by midday. Later, however, it was able to climb back onto green territory, recording a gain of 0.62 per cent to 2,852.46 index units at the end of the trading day.

The Dax 30 was a little firmer at the start but then slipped into red territory. By the end of trading, however, the index had gained 0.95 per cent to 10,513.79 points. The TecDAX was down in early trading as well and was already able to turn the corner in the morning. It maintained its positive trend during the day and closed with a plus of 1.75 per cent at 2,949.97 points.

Investors continued to focus on the reporting season, and today, Daimler and Lufthansa in particular. The profits of the carmaker and the airline suffered a massive slump in the first quarter. At Wirecard, on the other hand, investors seized the opportunity after there were no signs of misconduct despite the postponement of the KPMG audit report due to possible balance sheet manipulation.

The euro slid back below the $1.08 level in US trading on Thursday after a rollercoaster ride. Just before the close of trading on Wall Street, the common currency cost $1.0781. The European Central Bank set the reference rate at 1.0772 (Wednesday: 1.0867) dollars.

The British pound, which had been under heavy pressure in the past few days, managed to gain in today’s trading sessions. The Japanese yen came under pressure in the afternoon after reports that the central bank, the Bank of Japan, will discuss unlimited bond purchases at its next meeting on April 27th.

Oil prices recovered significantly on Thursday from their massive drop. However, the decisive factor is not a fundamentally different situation in the crude oil market. Instead, political tensions between the USA and Iran have led to rising risk premiums for crude oil. Most recently, a barrel of North Sea Brent crude with a plus of $1.45 cost $22.33. The price of a barrel of WTI oil rose by $3.80 to $17.97.

For the second day in a row, the gold price gained considerably and in the meantime reached a high of almost $ 1,740. Only two days earlier, the price was nearly $100 lower at $1,650 per troy ounce.

The recovery of cryptocurrencies also continued today. Bitcoin rose by almost 4 per cent to $7,400 while Ethereum and XRP rose by about 2 per cent to $185 and $0.1920, respectively.

According to the market research institute GfK, consumer sentiment in Germany suffered a historic collapse during the current crisis. The Nuremberg-based consumer researchers are forecasting a consumer climate index of minus 23.4 points for May. This represents a decline of 25.7 points from the already low of 2.3 points reached in April. By way of comparison, GfK had calculated a consumer climate index of 10.2 points for May 2019. The barometer has only ever been in negative territory once before: after the bursting of the dot.com bubble in 2003, the index fell to minus 5 points.

Similar to Europe, the mood of US companies plunged to a record low during the Corona crisis. As the institute IHS Markit announced on Thursday, the purchasing managers’ index it compiled fell in April from 40.9 points the previous month to 27.4 points. Even the previous lows from the times of the global financial crisis were thus undercut.

The mood in the service sector slumped particularly sharply. The companies there are particularly affected by forced closures to contain the virus. The crash of indicators generated from a survey pointed to a more severe economic slump than in the financial crisis of 2008/2009.