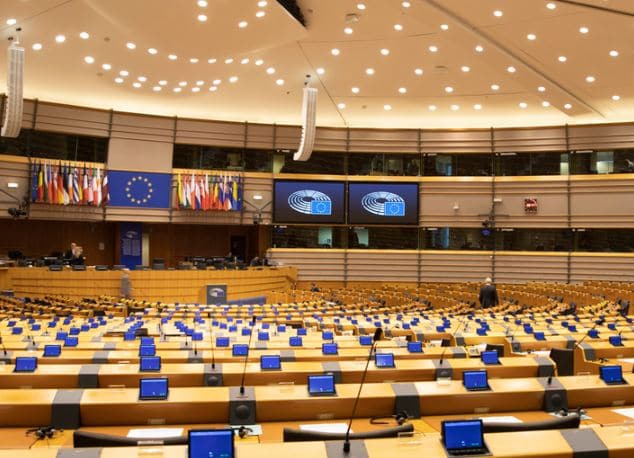 In the past trading days, there was only happy-happy-joy-joy in the financial markets. Especially the “historic deal” of the EU states around the corona reconstruction package was celebrated and was seen as a very bullish signal by the stock markets. But now, the EU parliament comes out as the ultimate party-pooper, puts on the brakes and halts the aid package – with disastrous consequences for the markets.

The EU parliament made additional demands, where the aim is to get more money for climate protection, research, health and students, said the Parliament in a resolution adopted by a vast majority on Thursday.

The day had started so exquisitely, with share prices rising again and convinced investors. But then the stock markets, already unsettled by the latest unemployment figures from the US earlier today, reacted abruptly on the news from Europe and a huge sell-off began.

Furthermore, the tensions between the United States and China are heating up more, and the corona situation is another unnerving factor.

Wall Street started on the front foot, and both the Dow Jones as well as the S&P 500 advanced to post new post-corona-crash highs. However, the many negative news that came out throughout the day put heavy pressure on the markets, and the indices started their freefall, which doesn’t seem to be over.

The Dow Jones slipped more sharply as the day progressed, ending the day 1.31 per cent lower at 26,652.20 points. The NASDAQ Composite technology index slipped even more drastically by 2.29 per cent to 10,461.42 index units.

Besides all the geopolitical news, the quarterly reporting season was still on the traders’ focus. Today, figures from Microsoft and Twitter were anticipated.

The initial jobless claims rose to 1.416 million last week after a revised 1.307 million the week before. Not only is this more than expected, but it is also the first increase since early April.

Mainland China and Hong Kong stock exchanges did not move in the same direction on Thursday. In Japan, there was no trading due to a holiday.

Europe’s markets fell victim to the EU Parliament’s decision at the end of the day.

On Thursday, investors first focused their attention on the continuation of the reporting season. Amongst others, Daimler and Covestro presented their balance sheets. Good corporate figures and positive figures from the US temporarily supported the mood on the European stock markets. The better than expected GfK consumer climate in Germany also had a supportive effect. In the afternoon, the US initial applications for unemployment benefits were on the agenda. These surprisingly rose again, causing renewed uncertainty.

The euro exchange rate stayed above the USD 1.16 mark even in late US currency trading on Thursday. Most recently, the common currency was quoted at 1.1603 dollars. In the transition from European to US currency trading, the euro peaked at 1.1627 dollars, another high since September 2018. Oceanic currencies such as the Australian dollar and the New Zealand dollar, took a bigger hit today as risk-reversal also affected the Forex market. The Australian dollar dropped more than 500 pips from $0.7150 to under $0.70.

Oil prices fell somewhat on Thursday after interim gains. The barrel of North Sea Brent is trading 21 cents lower at $44.08 in the evening. The West Texas Intermediate (WTI) variety also suffered slight losses of 14 cents to $41.76.

On the other side, the gold rally seems unstoppable and is fast approaching the all-time-high above $1,900. Today, the price per troy ounce almost scratched the $1,900 mark with $1,897 and ended the trading sessions at $1,887.

Cryptocurrencies, and especially so-called altcoins, also continued their upward trend. Supporting were various positive news from the US, first and foremost the decision of the Office of the Comptroller of the Currency (OCC) to allow nationally chartered banks in the US to offer custody services for digital assets. Bitcoin did not capitalize much on the positive signals and stayed put at $9,500. Other digital currencies such as Ethereum and XRP rose further today, Ethereum by almost 3 per cent to $270 and XRP by 1 per cent to $0.2060.

The Twitter share jumped over 7 per cent on Thursday before trading. The short news service has announced record growth in user numbers. Twitter counted 186 million daily users – a good 20 million more than in the first quarter. Falling advertising revenues due to the corona pandemic, however, depressed revenues by 19 per cent to 683 million US dollars. The bottom line shows a loss of $1.2 billion, mainly due to a substantial negative tax effect. The operating result was also negative at $124 million.

With the economic slump in the corona crisis, Daimler went deep into the red in the second quarter. The bottom line was a minus of 1.9 billion euros, the car manufacturer announced on Thursday. Revenue from April to June collapsed by 29 per cent to 30.2 billion euros compared with the same quarter last year. Key figures for the quarter were already known.

In its outlook, however, the Dax Group expects a positive operating result provided there is no second wave of infection. Company boss Källenius confirmed the austerity measures, which have already borne fruit. However, it is unclear what the cost-cutting measures will look like and to what extent they will be implemented. Meanwhile, job cuts in the order of up to 30,000 employees are being discussed, which is causing unrest. The Daimler share climbed 4.2 per cent to 40.83 euros.

At Unilever, the run of consumers on food in supermarkets compensated for the slump in demand in restaurants and cinemas. The manufacturer of Dove soaps, Lipton teas and Knorr soups managed to keep sales almost stable in the second quarter. Sales fell by just 0.3 per cent. Analysts had, however, anticipated a fall of 4.3 per cent. In the USA, sales rose by 7.3 per cent. “We have demonstrated the resilience of the company,” said CEO Alan Jope. The Unilever share gained around 7 per cent in the morning.