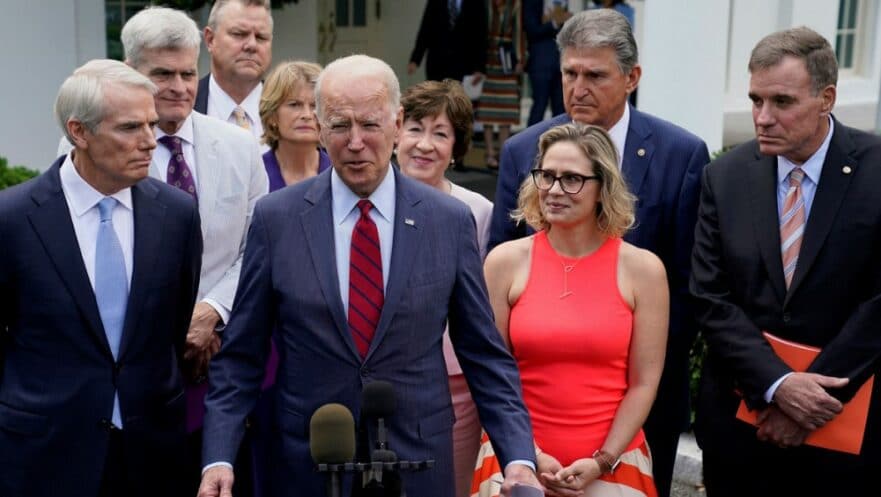 US President Joe Biden today announced an agreement on a billion-dollar infrastructure package after months of negotiations. “We have a deal,” the Democrat said on Thursday after talks with senators from both parties. The joint proposal calls for spending $1.2 trillion over eight years on roads and bridges, for example, but also broadband, e-car charging stations and the power grid.

Investors on Wall Street were confident and pushed the market to new record highs. The Dow Jones was able to extend its initial gains and closed with a plus of 0.95 per cent at 34,197.08 points. Investors in tech stocks were still in a buying mood. Hence, the NASDAQ Composite set a new record for the third day in a row at 14,414.46 points, with the stock market barometer ending the day at 14,369.71 points, up 0.69 per cent.

US President Joe Biden also put investors on Wall Street in a buying mood on Thursday. In the struggle over the infrastructure package, Biden had announced an agreement in the Senate. According to US media reports, the compromise has a total volume of around 950 billion dollars. Biden had originally presented an infrastructure package worth more than two trillion dollars. However, this had met with massive resistance from the Republicans. The agreement provided fresh momentum for the US stock markets.

The most important stock exchanges in Asia moved in a narrow range on Thursday. In Tokyo, the Japanese benchmark index Nikkei ended almost unchanged at 28,875.23 points. The Shanghai Composite in mainland China ended 0.01 per cent higher at 3,566.65 points. Hong Kong’s Hang Seng gained 0.23 per cent to 28,882.46 units.

As on Wall Street the previous day, stock markets in the Far East moved in narrow ranges to either side on Thursday. Buying by private investors had a supporting effect. Market participants pointed to easing concerns about the pace of possible interest rate hikes in the US.

The European stock markets also posted gains on Thursday. The EuroSTOXX 50 climbed by 1.14 per cent to 4,122.43 points during the day.

The DAX opened the session already above 15,500 points with a solid plus and further extended the gains throughout the day. Ultimately, the German benchmark index ended the trading session 0.86 per cent higher at 15,589.23 points. The TecDAX started the day with slight gains and was ultimately up 1.61 per cent to 3,534.66 points.

After declines in the middle of the week, the European stock markets recovered today. They received support from a better-than-expected ifo business climate index, which climbed in June to its highest level since November 2018.

The euro made further gains on the foreign exchange market today and was the last trading at 1.1934 dollars on the NYSE. The euro was supported by a generally friendly mood on the financial markets. For this reason, the US dollar was less in demand as a world reserve currency. In addition, surprisingly strong economic data from the eurozone boosted the common currency.

Northsea Brent and WTI oil prices rose again today. Northsea Brent traded for 75.43 US dollars in the evening, 24 cents more than on Wednesday, while US WTI rose by 21 cents to 73.29 dollars per barrel.

The gold price climbed to $1.787 an ounce intraday but ultimately closed almost unchanged at $1.777 an ounce.

The business climate in the German economy developed better than expected in June. The business climate index surveyed by the ifo Institute rose to 101.8 (May: 99.2) points. Economists had forecast an increase to 100.5 points. The business situation index rose to 99.6 (95.7) points versus 97.7 points expected. The ifo Institute reported a rise in the business expectations index to 104.0 (102.9) points. The forecast was 103.6 points. “The German economy is shaking off the Corona crisis,” the economic researchers commented on the data. In the service sector, the business climate index made a significant jump upwards. Indicators on the situation and expectations increased noticeably. Especially the logistics sector and IT service providers reported very good business. The service providers expected a marked increase in turnover, also in the crisis-ridden hospitality industry.

The Bank of England (BoE) has confirmed its key interest rate at the record low of 0.10 per cent. The purchase programme was also left at the previous level of 895 billion pounds. Stock exchange traders and economists had expected these decisions. The decision on the key interest rate was unanimous. There was one dissenting vote on the purchase volume; as in May, Councillor Andrew Haldane spoke in favour of capping the purchase programme by 50 billion pounds.

The US economy grew more strongly at the beginning of the year. The gross domestic product (GDP) rose in the first quarter by an annualised 6.4 per cent compared to the previous quarter, as the Department of Commerce announced on Thursday in Washington in a third estimate. The preliminary result was thus confirmed.

The USA‘s weekly initial claims for unemployment benefits fell less strongly than economists had forecast, with 7,000 claims to 411,000. However, the number of initial claims has been declining since the beginning of the year. However, aid applications are still well above the level that was usual before the Corona crisis. In the months before the pandemic, a good 200,000 new applications were submitted per week.