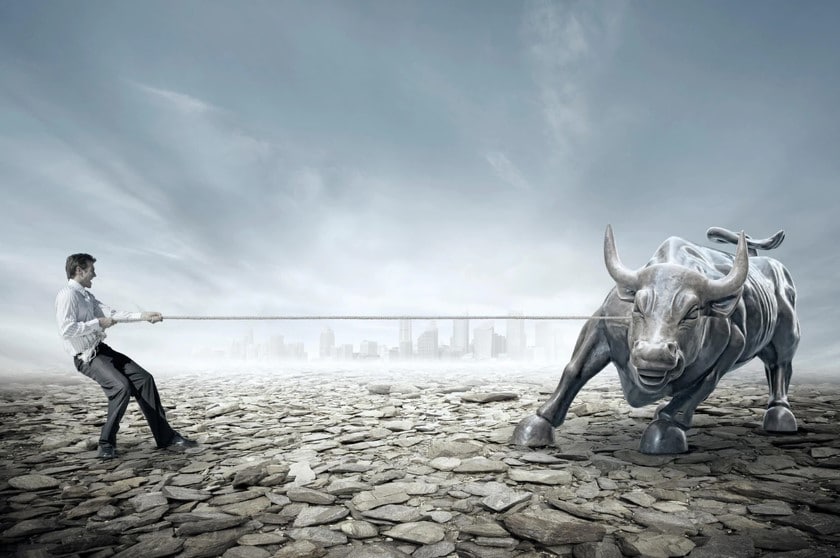 Initially, it looked like a dreary day on the stock markets today, with many global exchanges posting heavy losses. Among other things, renewed corona worries and Chinese boycott threats against Nike, Adidas & Co. depressed today’s mood.

The escalation of Chinese-American tensions and increasing concerns about global supply chains due to the stranded container ship blocking the important Suez Canal only initially weighed on the markets. Even the US Federal Reserve Chairman Jerome Powell’s hint to gradually tighten the monetary reins again only unsettled investors briefly. According to Powell, once the economy has almost fully recovered, the monetary support provided to the markets during the crisis will be scaled back very carefully and with great transparency.

But then the tide turned quickly, and Wall Street, in particular, picked up speed.

According to investment strategists, optimists and pessimists are engaged in a tug-of-war. The optimists are betting on gigantic stimulus packages from the Biden administration, corona mass vaccinations, and the economy’s normalisation. The pessimists fear stricter regulation in certain industries, possible tax increases, high government debt and inflation.

Wall Street was able to shake off initial losses on Thursday. The Dow Jones opened slightly lower, but ultimately gained 0.62 per cent to 32,619.48 points. The tech index NASDAQ Composite also managed to improve and, after an extremely weak start, ended the day up 0.12 per cent at 12,977.68 points.

After good economic data, concerns grew that the US Federal Reserve could reduce its supportive monetary policy earlier. Both the weekly labour market data and the US GDP in the fourth quarter turned out better than expected. Even Fed Chairman Powell had stated in an interview that the US central bank would reduce its quantitative easing in the event of a recovery.

However, an intensification of Sino-American tensions and growing concerns about global supply chains also negatively impacted.

In Asia, the markets did not find a unified direction. The Japanese benchmark index Nikkei ultimately gained 1.14 per cent to 28,729.88 points. On the other hand, there was indecision on the Chinese mainland, where the Shanghai Composite was 0.1 per cent lower at 3,363.59 points. The Hang Seng in Hong Kong was also 0.07 per cent lower at 27,899.61 units.

On the Chinese trading floor, tensions between China and the US clouded the mood. The US Securities and Exchange Commission has introduced measures that require foreign companies to comply with US auditing standards or else face expulsion from the stock market.

Tokyo’s Nikkei index was up as investors looked to the government’s corona vaccination campaign and economic relief measures.

In the end, the European stock exchanges hardly made any headway on Thursday. After a weak start, the EuroSTOXX 50 initially fell further but was then able to make up most of its sharp losses from the afternoon. In the end, it went into the evening hardly changed at 3,832.57 points.

With Wall Street turning positive, the DAX on the Frankfurt Stock Exchange managed a late turnaround. The German benchmark index shook off its price losses and exited Xetra trading with a mini-plus of 0.1 per cent. At times the minus was up to 1.3 per cent. The TecDAX also extended its initial loss, but in contrast to the leading German index, it remained deep in the red and ended the day 0.84 per cent weaker at 3,349.82 units.

Rising COVID-19 incidence figures and sluggish progress with vaccinations did not inspire investors. “There is no question that the recovery in the EU will be much slower than in the US given the COVID-19 setbacks,” said analysts at Barclays Bank.

Jerome Powell, in particular, also caused selling pressure with his speech from Wednesday. The Fed chief wants to consider interest rate hikes again after the economy has practically recovered.

Faced with fears of further economic fallout from the third Corona wave, some investors turned to “safe havens” such as Bunds and, once again, the greenback. This put other currencies, as well as the euro, under strong pressure. The euro, therefore, fell below 1.18 US dollars on the forex market for the first time since November – in New York trading, the last price quote was 1.1770 US dollars.

After Bitcoin and co continued their downward trend during the Asian and early European sessions, a reversal set in, sending Bitcoin up 0.5 per cent to $52,500. However, alternative cryptocurrencies, so-called altcoins, outperformed BTC, with XRP and THETA leading the pack with 10 and 14 per cent gains on the daily chart. Ethereum was also up, increasing 2.5 per cent to $1,618.

As expected, the Swiss National Bank (SNB) does not touch interest rates and continues its very expansionary monetary policy. Specifically, it leaves its key interest rate and the interest rate on sight deposits at minus 0.75 per cent, as it announced on Thursday. The SNB also emphasised its intention to continue intervening in the foreign exchange market if necessary. This is because it still sees the franc as “highly valued”. A few days ago, the SNB had announced that it had bought foreign currencies for almost 110 billion francs in 2020. This means that the SNB intervened last year as never before since the minimum exchange rate was lifted.

The number of initial claims for unemployment benefits in the USA declined more than expected in the week ending 20 March 2021. According to the US Department of Labour, compared to the previous week, the number of claims fell by 97,000 to 684,000. Economists polled by Dow Jones Newswires had predicted only a drop to 735,000.

The US economy grew somewhat more strongly in the fourth quarter of 2020 than previously reported. According to the third release data, the gross domestic product (GDP) increased by 4.3 per cent on an annualised basis compared to the previous quarter.