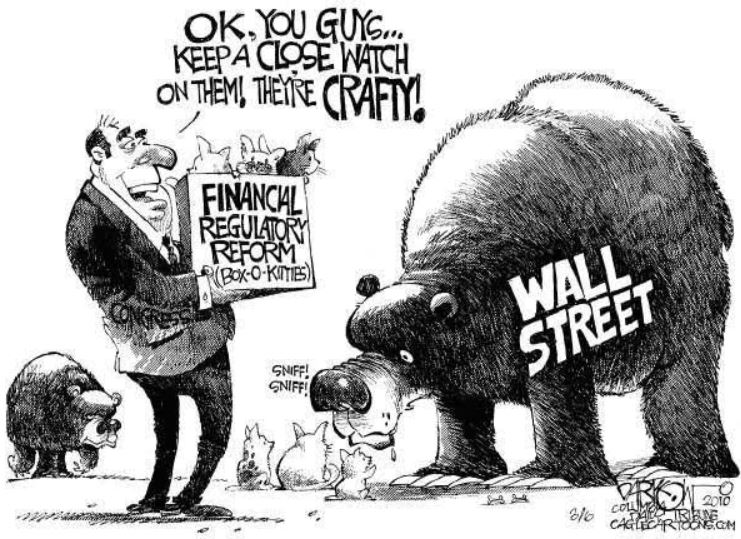 After Wall Street and co. had a hard time during the Asian session and in the morning in this country and recorded further losses, the tide suddenly turned.

The markets, especially the energy and financial sectors, benefitted the most when reports came out of potential easing of financial rules (Volcker rule). Subsequently, the banking and financial services sector shares appreciated sharply. The Volcker Rule is a part of the Dodd-Frank bill enacted in the year 2010 following the meltdown of the GFC back in 2008. The rule came into play to crack down on the risky practice by the worlds largest banking firms. In estimates, the relaxation of this legislation could potentially free up as much as 40 billion US dollars for the big banks. The share prices of Goldman Sachs, Bank of America and JP Morgan all rose by over 2% higher.

Earlier in the day, fears of a second corona wave put heavy pressure on the markets, and most global indices continued their decent from the previous day.

The Trump administration’s sabre-rattling on trade issues is not going down well either. According to the news agency Reuters, the USA is preparing the ground for new financial transactions against China. US President Donald Trump’s government has concluded that large corporations such as the telecom supplier Huawei and the video surveillance company Hikvision are either owned or controlled by the Chinese military.

The US stock exchanges ended Thursday trading in the profit zone after all.

The US leading index Dow Jones hovered around the zero line for most of Thursday’s trading but finally closed with a plus of 1.17 per cent at 25,744.71 points. The NASDAQ Composite also joined the late buying mood, with investors lifting the Tech Value Index by 1.09 per cent to 10,017.00 index points in the end.

The corona scare from the previous day still had an effect – the number of new infections in the USA has risen sharply. On Wednesday, 35,900 new infections were recorded in the USA within 24 hours – the same number as at the peak of the crisis in April. In some cases, corporations are even rethinking their plans to resume operations.

However, positive economic data helped to boost the markets: orders for durable goods recovered surprisingly strongly in May from their slump in the previous month. However, initial weekly applications for unemployment assistance remained high at 1.48 million people up to and including 20 June, even though around 60,000 fewer initial applications were received than in the previous week.

On Thursday, the Nikkei declined, while the Chinese stock markets remained closed because of public holidays. In Tokyo, the Nikkei ultimately lost 1.22 per cent to 22,259.79 points.

On Thursday the Dax 30 shrugged off negative news such as possible US punitive duties and the danger of a new corona wave. Besides, payment processor Wirecard again moved into the limelight: Wirecard announced that the company would apply for the opening of insolvency proceedings. The share price plummeted at times by over 80 per cent – a drop like no other ever witnessed within the Dax.

In the Forex market, the euro is moderately weakening today. In the evening, the common currency costs 1.1220 US dollars, slightly less than in the morning.

Oil prices on Thursday recovered a little from their losses of the previous day. A barrel of North Sea Brent is now priced at 40.52 US dollars, 20 cents more than the last day. The cost of a barrel of the American variety West Texas Intermediate (WTI) rose by 19 cents to $38.20.

Cryptocurrencies also consolidated after their substantial losses on Wednesday. Bitcoin increased marginally to $9,250, while Ethereum stayed unchanged at $232 and XRP at $0.1840.

The Mexican central bank wants to support the country’s economy in the Corona crisis with a further interest rate cut. The currency guardians reduced the key interest rate on Thursday (local time) by half a percentage point to 5.0 per cent, as economists had expected.

As in other countries, the Corona pandemic is also having a severe impact on Mexico’s economy in the face of global lockdowns. The International Monetary Fund expects Mexico’s economic output to shrink by just over 10 per cent this year.

Europe’s largest low-cost airline Ryanair is taking the case to the European Union court because of Lufthansa state aid. “This is a spectacular case in which a rich EU member state ignores EU treaties to the benefit of its national industry and the detriment of poorer countries,” Ryanair CEO Michael O’Leary said in Dublin on Thursday. The EU Commission’s competition watchdogs had previously approved the German government’s Lufthansa rescue package.

The Commission’s approval of Lufthansa’s rescue package was a “betrayal” of the basic principles of EU law, they said. “We have no choice but to appeal to the EU court,” O’Leary said.

The controversial vote on the most significant constitutional change in the country’s history began in Russia today. 110.5 million eligible voters will be able to take part in the referendum for six days until next Wednesday. The last voting day on 1 July will also be the main election day. Vladimir Putin is clinging to power with all his might. After more than 20 years in service, the 67-year-old now wants to secure further terms of office as president by amending the constitution. This would enable him to continue to lead the raw materials and nuclear power – for another 16 years, until 2036.