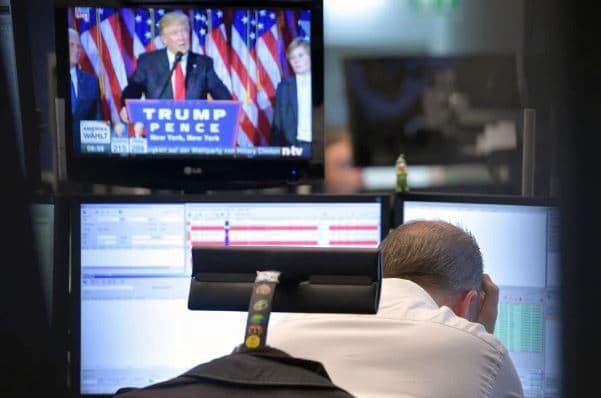 US President Donald Trump is once again keeping the stock markets on the move. First, he unsettled investors with his “Ukraine affair”, which could cost him his office, then he raised hopes for an end to the trade dispute with China.

While Europe’s stock market retreated, investors on Wall Street took new courage. The Dow was up 0.6 per cent two hours before the close of trading, moving towards 27,000 points. Speculation that the Chinese-American trade dispute would soon be settled boosted US stock markets on Wednesday. They made up for Tuesday’s losses. By contrast, the NASDAQ Composite tech index posted a slight loss of 0.04 per cent at the start, but then turned positive and gained ground. The index out of trading was 1.05 per cent stronger at 8,077.38 points.

Strong quarterly figures from the sporting goods manufacturer Nike supported the Dow. Otherwise, the focus is on politics.

One day after his fierce criticism of Chinese trade policy, US President Donald Trump raised hopes of an early agreement with the Beijing leadership. “They absolutely want to make a deal,” Trump said. “That could happen faster than you think.

Domestically, however, Trump is under a lot of pressure. In the Ukraine affair, the Democrats in the USA are trying to have US President Donald Trump removed from office. The background to this is the accusation that Trump had urged Ukrainian President Volodymyr Selenskyj to investigate the case, which could be used against the democratic presidential candidate Joe Biden. Trump denied the allegations and made his telephone conversation with the Ukrainian president public.

Asian equity markets are trending in several directions on Thursday.

Positive signals from the trade dispute between the United States and Japan only provide slight premiums in Tokyo. US President Donald Trump and Japanese Prime Minister Shinzo Abe are said to have signed a “large part” of the agreement the previous day. However, cars will probably remain excluded.

The bears took the helm on the European stock markets on Wednesday and continue doing so this morning.

In the middle of the week, market participants spoke of a continuation of the recent consolidation on the stock markets in Europe. “Many funds are now preparing for a recession and are making their portfolios watertight for the time being,” said one market participant. We are therefore looking for defensive stocks.

“The stock market is becoming increasingly uncomfortable,” wrote the authors of the Bernecker stock market letter. After the joyous frenzy of the past weeks, the weak purchasing managers’ indices on Monday had clouded the mood on Europe’s stock exchanges. The central banks still resisted the less than pleasing economic outlook with their loose monetary policy. The monetary authorities must be careful not to become driven by the markets.

The local German stock market continued its slide towards the middle of the week. After a weak start, the DAX remained on a red ground and even temporarily slipped below the 12,200 mark yesterday. Finally, it ended the day 0.59 per cent lower at 12,234.18 points. Also, the TecDAX started the day lower. Losses expanded significantly during the day. It finally closed 1.73 per cent lower at 2,794.09 points.

Thus, the DAX followed the weak targets from Asia. The news that the US Democrats had instituted impeachment proceedings against US President Donald Trump had a negative impact.

“Even in the middle of the week, the DAX cannot free itself from the stranglehold of the geopolitical situation,” said market expert Andreas Lipkow of Comdirect Bank with a view to the power struggle in Washington, the ongoing trade conflict, the Brexit hanging game and the tensions surrounding Iran. “All these issues are hitting the German economy right in the centre, the export sector,” Lipkow explained further.

On the currency market, the euro has been fluctuating between 1.0965 and 1.0950 US dollars for hours. It’s currently not finding a clear direction and is trapped in this tight range for the time being.

The US dollar profited from the political affair over Trump, and the Greenback gained significant ground across the board on Wednesday. The dollar’s strength is mainly due to the enormous bond market in the United States and the high reputation American government bonds enjoy among investors. The dollar can therefore often benefit from turbulent developments, as investors go in search of security – and not least find what they are looking for in US government bonds.

On the commodity markets, oil prices fell for the second day in a row: the North Sea variety Brent fell by more than two per cent to 61.83 dollars per barrel. The gold price also lost weight and fell after a strong start around the $1,530 mark towards the end of the trading day to just $1,500 an ounce.

The cryptocurrency market closed almost unchanged on Wednesday after the massive drawdown on Tuesday. This morning, the price of Bitcoin is sitting at just $8,400 after its almost 20 per cent decrease on Tuesday. Similarly, one Ethereum cost around $170 which is a minor plus of 0.40 per cent compared to the previous day. On Tuesday, Ethereum plummeted from $218 to under $170 within minutes, a minus of more than 20 per cent. In contrast, XRP, the third-largest digital asset by market cap, rose by more than 2 per cent yesterday to $0.2440 after it had dropped “just” 10 per cent on Tuesday.

All signs point to the fact that XRP is the superior digital asset that can challenge Bitcoin’s long-kept no.1 spot in the cryptocurrency space. Time will tell…

The software company Teamviewer had made a mixed start on the stock market yesterday. After the owner of the company, the financial investor Permira, raised a good 2.2 billion euros with the sale of the shares, things went down after the start of trading. The shares closed at 25.30 euros and were thus below the offer price. Permira had set the offer price at 26.25 euros the evening before.

Deutsche Bank has been targeted by investigators in connection with the money laundering scandal at Danske Bank. Officials of the Frankfurt public prosecutor’s office and the Federal Criminal Police Office have been at the Deutsche Bank headquarters in Frankfurt since Tuesday to secure documents, a spokesperson for the public prosecutor’s office said. Investigators were investigating suspicions that the institute had submitted suspicious money laundering reports too late. A search warrant had been issued, but Deutsche Bank was cooperating with the authorities.

Deutsche Bank stated that it had comprehensively dealt with the matter itself and, as far as possible, voluntarily surrendered the requested documents. It will continue to cooperate with the public prosecutor’s office.

British Prime Minister Boris Johnson has called on the opposition to vote no-confidence in the battle over Brexit. The Labour Party should try to overthrow him, Johnson said in the British parliament. However, if the opposition were to renounce a vote of no confidence, the parliament would have to withdraw in the future and clear the way for the government’s Brexit plans.