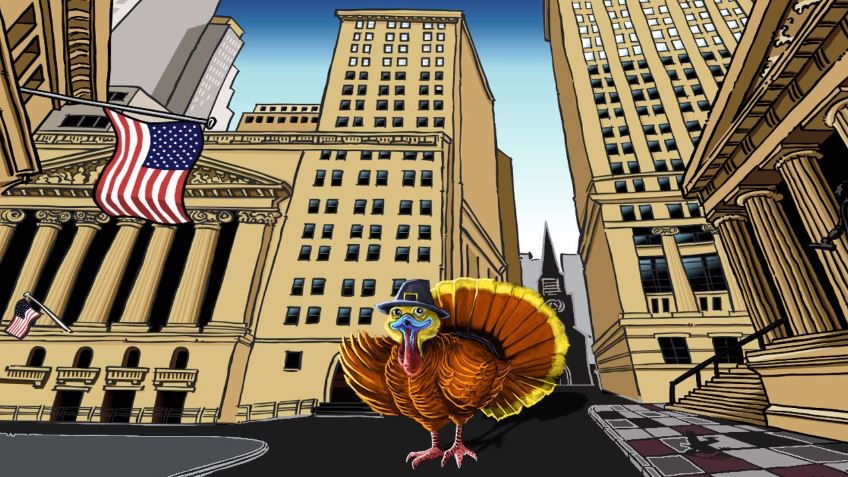 When Wall Street is closed for Thanksgiving, little happens on the world markets. That was the case again today.

Shortly before Thanksgiving, US President Donald Trump approved the laws passed by Congress to support the democracy movement in Hong Kong, immensely upsetting China. China’s foreign ministry then threatened with “tough countermeasures” and appointed the US ambassador. Traders and stock strategists now fear a new ice age in the trade talks between Beijing and Washington. The already several times announced approaching agreement on a first partial agreement could fail.

Due to the Thanksgiving holiday, there will be no trading on the US stock exchanges on Thursday. Also, on Friday, only a shortened trading day will take place.

The stock markets in the Far East showed red signs on Thursday.

Investors fear that the laws passed by the US Congress to support the democracy movement in Hong Kong could have a negative impact on the negotiations in the trade dispute, especially now that they have also been signed by US President Donald Trump.

The stock markets in Europe were weaker on Thursday. The EuroStoxx50 and the French Cac40 fell by a good 0.2 per cent. The German stock market also fell on Thursday. The DAX had already started the day at a markdown and remained in the red afterwards. It said goodbye 0.31 per cent easier at 13,245.58 points in the evening. The TecDAX also started with a loss and was also trading with a red sign in the course of the day.

The euro’s exchange rate hardly moved on Thursday. It was stagnant at just over 1.10 US dollars, with the common currency costing 1.1008 dollars most recently. In the USA, the financial markets remained closed due to a public holiday and were unable to provide any impetus.

The British pound, on the other hand, climbed temporarily to 1.1762 euros, its highest level for seven months. The British currency received a tailwind from a survey according to which the Tories around Prime Minister Boris Johnson could conquer 359 of the 650 seats in the election on 12 December.

Trade with the Best Brokers for Cryto Currencies

The nervousness of the investors was noticeable in the commodity markets due to the latest news about China-USA relations. Brent crude oil from the North Sea fell by almost one per cent to 63.52 dollars per barrel, and the important industrial metal copper cost 5906.50 dollars per tonne, 0.6 per cent less than on Wednesday. Gold was in demand at times. In the evening, the precious yellow metal settled back at the previous day’s level of 1,455 dollars per troy ounce.

Cryptocurrencies didn’t move much today. The overall market capitalization remained at approximately $205 billion and the Bitcoin price at roughly $7,500.

The President of the Deutsche Bundesbank, Jens Weidmann, has once again warned of the undesirable side effects of an extremely loose monetary policy.

In the long run, this could increase the risks to financial stability, Weidmann said on Thursday according to the speech in Berlin. “On the whole, the German financial system has become more vulnerable in the event of an unexpected economic downturn and not just – as is currently the case – stagnating for a while,” warned the currency guardian.

If the economy collapses, “more loans could default again, and collateral could lose value at the same time,” said Weidmann. And due to the banks’ low-risk provisioning, the resulting losses would have a faster impact on the equity capital of the financial institutions.

However, it is still too early to make a final judgement on the expansive monetary policy with the purchase program for bonds. “The longer-term effects of unconventional monetary policy have not yet been sufficiently researched,” said Weidmann.

After Thanksgiving, the “Black Friday” is on the agenda, which heralds the Christmas business in the USA. Investors will be keeping a close eye on the Americans’ willingness to consume. “If private consumption gets a cold, the US economy will get the flu,” said portfolio manager Thomas Altmann of QC Partners.

Morgan Stanley’s Infrastructure Fund has extended the bidding period by two weeks due to the sluggish acceptance of its takeover bid for the wind power developer PNE. Shareholders now have until 12 December to tender their shares to Morgan Stanley, the company said. Initially, the deadline would have expired on Thursday.

The offer of EUR 4.00 per PNE share was, however, subject to the condition that more than 50 per cent of the shares would be tendered to MSIP. So far, it has been almost 40 per cent. The major shareholders Enkraft and Active Ownership Capital (AOC) reject the takeover offer. The management of the wind turbine developer recommends that its shareholders accept the takeover offer.

Ray Dalio is not a bear

Hedge fund manager Ray Dalio has countered the impression that he expects the equity markets to collapse in the coming months.

The Wall Street Journal (WSJ) reported on 22 November that the world’s largest hedge fund company, Bridgewater Associates, founded by Ray Dalio, had bet $1.5 billion, or around one per cent of its assets that the S&P500 or EuroSTOXX 50, or both would crash significantly by March 2020. The report explained that the reason for the investment was unknown and that funds regularly enter into opposing transactions to hedge against losses. But in Dalio’s eyes, the report as a whole still gave the wrong impression.

The hedge fund manager explained on Twitter: “The Wall Street Journal has reported that Bridgewater is betting heavily on a market slump. That’s wrong. I want to make it clear that we don’t have such a net bet on a stock market slump.”

We told Juliet Chung, the author of the article, that it would be misleading to accuse us of a bearish attitude towards the stock market, but it was done anyway.

In another tweet, he therefore sharply criticized the way in which the WSJ conducts journalism: “I think we now live in a world where authors want sensationalist headlines above all, even if the facts don’t match the headlines.

As the WSJ reported, referring to informed circles, the investment in question consists of put options. These are derivatives that give an investor the right, but not the obligation, to sell a certain asset at a specific time, at a fixed price. As reported by the WSJ, it is not unusual for large investors to hedge their portfolio in this way. However, such transactions do not necessarily have to reflect the overall attitude of investors to market developments.

And that’s what it seems to boil down to: Dalio doesn’t deny the mentioned investment itself, but he is disturbed by the way it is presented and the impression it conveys.