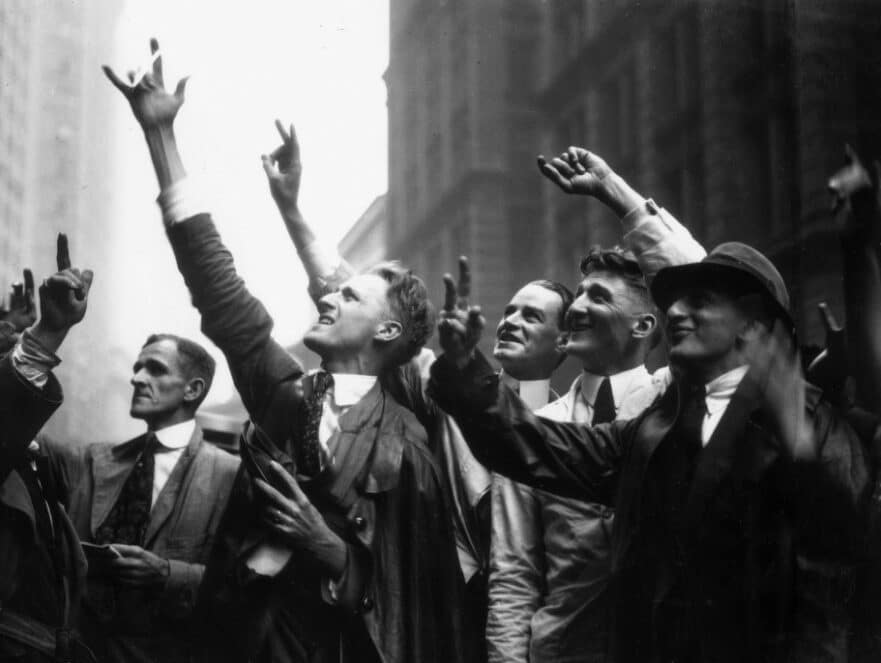 The US economy is running at high speed – thanks to Americans’ increasing desire to consume, and this shopping mood is infecting the stock markets. New records were set on Wall Street, even if they could not be maintained.

While in Europe, the economy is only gradually gaining momentum, the USA is in the midst of an economic boom. In the second quarter of 2021, the gross domestic product (GDP) rose by 6.5 per cent for the year. The biggest boost came from domestic consumption. This grew at an annualised rate of 11.8 per cent. This is the strongest growth in decades. The vaccinations, the government’s financial aid and the extensive lifting of corona restrictions are having an effect, even though economists had expected an even higher growth of 8.5 per cent. However, supply bottlenecks slowed the spring upswing. The GDP underpins the assessment that the Fed will continue to provide a stimulus for quite some time, experts said.

Wall Street was mostly friendly today, even if records could not be maintained. The Dow Jones started the session slightly stronger and then continued to rise. At times it climbed to a new high of 35,171.52 points. It ultimately exited the trading session 0.44 per cent higher at 35,084.14 points. The NASDAQ Composite also moved higher and closed up 0.11 per cent at 14,778.26 points.

After the US Federal Reserve declared on the previous evening that it wanted to stick to its extremely loose monetary policy, investors were also pleased. On Thursday, however, some of the initial euphorias had dissipated. Economic data published today show that the economy has not yet fully recovered. Although the gross domestic product (GDP) increased by 6.5 per cent in the second quarter, economists had expected up to 8.4 per cent. Although fewer initial claims for unemployment benefits were filed last week than the week before, the number was still higher than expected.

Some of the most important Asian stock markets rose significantly today. The Japanese benchmark index Nikkei ultimately climbed by 0.73 per cent to 27,782.42 points. On the Chinese mainland, the Shanghai Composite index rose by 1.49 per cent to 3,411.72 index points while Hong Kong’s leading index, the Hang Seng, jumped 3.30 per cent to 26,315.32 points.

Looking ahead to a virtual meeting of Chinese regulators and global investment banks the previous day, market participants showed optimism. Beijing’s concerns about the effects of the recently tightened regulations for Chinese companies had previously weighed heavily on the markets.

The mood on the European market was also friendly. The EuroSTOXX 50 was still little moved when the starting bell sounded but then fought its way further into the profit zone and went into the evening 0.33 per cent stronger at 4,116.77 index units.

The Fed’s decisions the previous evening dominated the European stock markets. The central bank stated that it intended to maintain its extremely loose monetary policy despite higher inflation on the horizon.

Meanwhile, numerous companies presented their balance sheets for the past quarter.

On Thursday, the euro was able to extend its gains from the previous evening. The common currency was up to 1.1883 US dollars in the evening and thus more than it had in about three weeks. The euro and other currencies received a boost from a consistently weaker dollar on the forex market due to the dwindling interest rate fantasy in the USA after yesterday’s Fed meeting.

Oil prices rose again on Thursday. At last count, a barrel of Brent oil from the North Sea cost 74.65 US dollars, 78 cents more than the previous day. US WTI rose by 73 cents to 73.11 dollars. Prices are thus about four dollars below their multi-year highs reached the beginning of July. A weaker greenback has recently boosted oil prices across the board. A weaker-than-expected gross domestic product in the USA in the second quarter weighed on the dollar.

Gold prices also continue to benefit from the weaker global reserve currency and rose to $1,830 per troy ounce.

The situation in the German labour market improved far more than expected in July. According to the Federal Employment Agency (BA), the seasonally adjusted number of unemployed fell by 91,000 compared to the previous month, after a revised decrease of 39,000 in June. The seasonally adjusted unemployment rate fell to 5.7 (June: 5.9) per cent.

Contrary to expectations, growth in the US economy hardly strengthened in the second quarter. According to the Bureau of Economic Analyses (BEA), price-adjusted gross domestic product (GDP) rose by an annualised 6.5 per cent compared to the previous quarter. Analysts surveyed by Dow Jones Newswires had forecast 8.4 per cent growth.

The number of initial claims for US unemployment insurance declined less than expected in the week ending 24 July 2021. Compared to the previous week, the number of claims fell by 24,000 to 400,000 on a seasonally adjusted basis, as announced by the US Department of Labour in Washington. Economists surveyed by Dow Jones Newswires had predicted a decline to 380,000.