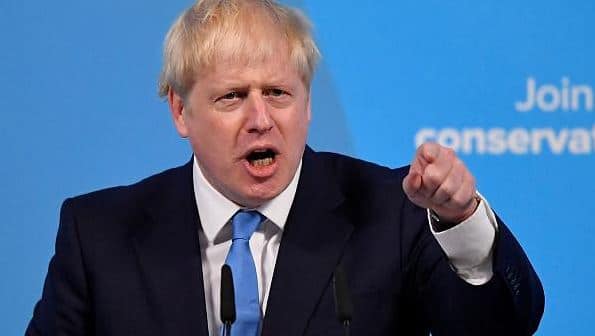 Sterling beaten down after Johnson speech

The Brexit issue is not letting investors go. British Prime Minister Boris Johnson is cutting Parliament’s time in deliberation on the Brexit dispute before EU withdrawal. Johnson announced that the usual two-week break from mid-September will be extended to around four weeks until 14 October. The Queen officially confirmed the extension in the afternoon. The British pound plummeted after Johnson’s plans became known and lost 0.4 per cent against the dollar to 1.2236 dollars.

Yesterday, the US equity markets saw a sharp upward movement in the second half of trading. The Dow Jones index closed one per cent higher at 26,036 points. The broader S&P 500 gained 0.7 per cent to 2,887 points. The composite index of the technology exchange Nasdaq advanced 0.4 per cent to 7,856 points.

Market observers blamed chart technical reasons for the turnaround in the course of trading. In early trading, the Dow Jones fell to 25,637 points. The average line for the past 200 trading days was only slightly lower. It is regarded as an indicator of the longer-term trend. And now it is pointing further up. In the past weeks, the US leading index had fallen below this trend line several times, but then always managed to exceed it again.

According to the market, the recovery on Wall Street was only supported by rather small volumes. Meanwhile, the yield on 30-year US bonds fell to a record low and was thus below the key interest rate of the US Federal Reserve – “something that has never happened before,” said market analyst Michael Hewson of CMC Markets UK.

The stock markets in the Far East posted smaller losses on Thursday.

The Asian stock markets continue to lack momentum. There are still no clear signals from the trade conflict – both sides are expected to talk to each other again soon. Investors are also focusing their attention on geopolitical concerns and the inverse yield curve, which signals the impending recession.

The EuroSTOXX 50 moves pre-market on red terrain. The trade conflict between China and the United States and the associated uncertainties continue to simmer in the background. In addition, the risk of a hard Brexit at the end of October has increased with the decision of the British government to send the parliament on a forced break. Investors will also be looking to Italy on Thursday, where new elections seem to have been averted for the time being after a three-week crisis. According to its statements, the five-star populist movement has reached an agreement with the Social Democratic opposition party PD on a government coalition.

Germany’s leading index, the DAX, lost 0.2 per cent to 11,679.70 points around one hour before the opening of trading. The TecDAX is also likely to start the new day somewhat weaker.

In the forex market, the euro has been floating around the $1.1080 level since early Wednesday afternoon. As already mentioned, the British Pound was at the centre of events yesterday and plummeted across the board. The EUR/GBP price briefly rose to over 0.91 GBP.

The gold price is still flying high and has now crossed the $ 1,545 an ounce mark again. The silver price also rose significantly and is currently set at around $18.55 an ounce. And crude oil, too, recorded solid gains. Brent crude rises presently to over $60.30 and WTI to over $56 a barrel.

The cryptocurrency market, on the other hand, recorded some hefty losses with Bitcoin plummeting to $9,500. Ethereum got hit even harder and lost almost 9 per cent in less than 24 hours and is currently trading around the $170 mark. Ripple’s XRP also fell by 5 per cent to currently $0.2550. The third-largest cryptocurrency in market capitalization should find strong support at the $0.24 handle.

Argentina wants to get some financial air with a debt rescheduling. Finance Minister Hernan Lacunza announced negotiations with holders of government bonds and the International Monetary Fund (IMF). He wants to extend the maturities of bonds and IMF loans to ensure the solvency of the debt-ridden country.

Argentina has been under pressure for weeks from a slide in the value of its domestic currency, the peso. This has lost almost 22 per cent of its value against the dollar since 11 August. On that day, business-friendly President Mauricio Macri lost a crucial primary election to his left-wing challenger Alberto Fernandez, who is now the favourite for the October presidential election. There is fear in the financial markets that the decline in the peso could lead to the country no longer being able to pay its dollar debt.

US Treasury Secretary Steven Mnuchin is considering an ultra-long government bond issue. These can have maturities between 50 and 100 years. Mnuchin told the Bloomberg news agency that such a move is currently being seriously considered because of the low interest rates. The US could benefit from the current good credit environment with such long-drawn-out loans. The recent rise in uncertainty in the financial markets has driven investors into investments such as bonds, which are regarded as a safe haven.

Yields are falling above all in the USA. The interest rate on the 30-year bond, for example, fell temporarily to 1.906 per cent, making it lower than ever before. It is thus below the Fed’s key interest rate. The yield on ten-year securities has fallen further below that on two-year securities. This so-called inverse yield curve is seen as a harbinger of a recession.

The country’s central bank lowered its growth forecasts for this and next year on Wednesday. For 2019, the central bank only expects economic growth to increase by 0.2 to 0.7 per cent. It had previously targeted 0.8 to 1.8 per cent. For 2020, the central bank expects growth of only 1.5 to 2.5 per cent, compared to 1.7 to 2.7 per cent previously. The lull will thus last longer than initially predicted. Risks for the economy are the ongoing global trade dispute and a deterioration in the credit rating as well as the devaluation of the national currency Peso and customs threats from the USA.