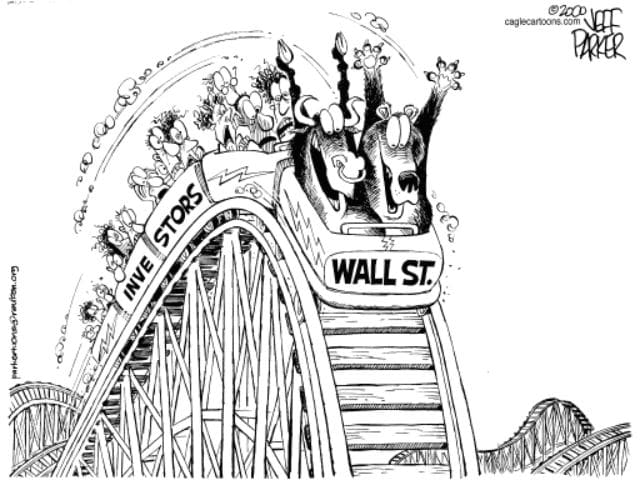 Hopes for economic recovery after the corona crisis gave the stock market a substantial boost in April. Nevertheless, market experts have been warning for weeks against excessive and hasty euphoria. By now it is clear to everyone: the damage caused by the ongoing crisis and the weeks of standstill in the global economy is immense, and it will be a long time before something like everyday life returns. This realization was very present again today at the end of the month, and the markets flashed red.

The eurozone economy collapsed by 3.8 per cent in the first quarter. This is the most significant decline since records began in 1995.

Once again, the New York Stock Exchange had to struggle with disastrous news from the US economy. The weekly first applications for unemployment benefits are causing disillusionment. Last week, another 3.8 million US citizens made their first application for unemployment assistance, according to a statement by the Labour Ministry in Washington on Thursday. On average, “only” 3.5 million were expected. Within the past six weeks, these applications for state support added up to about 30 million.

Asia’s stock markets continued their recovery on Thursday. The Japanese leading index Nikkei 225 rose by 2.1 per cent to 19,193 points after the holiday the previous day. In China, the CSI 300, which comprises the 300 most important shares on the Chinese mainland stock exchanges, rose by 1.1 per cent most recently. In Hong Kong and Korea, the markets remained closed due to a public holiday.

The main driver for the positive values was the strong performance of Wall Street on the previous day.

The European stock markets fell sharply on Thursday. The EuroSTOXX 50 initially appeared firmer at the opening but was unable to defend its markups. It ended the day 2.27 per cent lower at 2,927.93 units.

After a firmer start, Germany’s leading index also slipped into a clear minus on Thursday. Higher unemployment figures and very weak economic data (retail sales) caused the Dax 30 to drop 2.22 per cent to 10,861.64 points. The TecDAX had also recorded markups at the start, which then melted away. It went 0.87 per cent weaker at 2,854.65 points into the long weekend.

Since last Friday, however, the leading German index has still gained 5 per cent on a weekly comparison and around 9.3 per cent in April as a whole.

The euro held on to its gains against the dollar in late trading in the US on Thursday. Most recently, the common currency was valued at 1.0952 US dollars, significantly more than the daily low in European trading, which was $1.0835.

Oil prices continued to extend their gains throughout the day on Thursday. A barrel of North Sea Brent crude cost $25.35 at the end of the day. That was $2.80 more than on Wednesday. The price for the US variety WTI rose by $2.62 to $17.64.

The price of a troy ounce of gold came under greater pressure in the evening. After a long period of quiet trading, the price fell by 1.7 per cent. The value thus dropped below the $1,700 mark to $1,686.

Cryptocurrencies consolidated on Thursday and returned some of their substantial gains from the previous days. A Bitcoin currently costs $8,800, a minus of 0.5 per cent. Ethereum lost 2,5 per cent to $211, and XRP dropped 4.8 per cent to $0.2160.

The virus crisis has abruptly sent the US job market, which had been booming for years, on a downward spiral towards mass unemployment. In March, 701,000 jobs outside of agriculture were already cut before the big wave of applications for unemployment benefits began to roll in the second half of the month. Besides, US consumer spending in March fell by 7.5 per cent compared to the previous month. Economists had expected a decline of 5 per cent.

“Consumer spending fell at a historical rate (previous low of -2.1% in January 1987). Also, incomes are suffering from the effects of current conditions. Moreover, the economic outlook remains clouded due to the deteriorating labour market.

Deutsche Börse generated significantly more turnover and earnings in the first quarter due to brisk trading on the financial markets and the increased uncertainty resulting from the corona pandemic. Net proceeds climbed 27 per cent to €915 million, the Dax-listed company announced. Earnings before interest, taxes, depreciation and amortization (Ebitda) adjusted for special effects rose by 30 per cent to 620 million euros. Both figures thus rose even more strongly than experts had expected anyway.

The oil and gas multinational Shell is cutting its dividend in a historic step. After profits had slumped in the first quarter of the year due to the Corona pandemic and the oil price crisis, shareholders are now to receive a quarterly dividend of 0.16 US dollars per share, the company announced in London on Thursday. In the previous year, Shell had paid out 0.47 dollars per share for the first quarter. It is the first time since World War II that the group has reduced its dividend.

In the first quarter, Shell’s profits adjusted for extraordinary effects collapsed by 46 per cent to 2.86 billion dollars compared to the previous year. Analysts had expected an even more dramatic decline. At the bottom line, the group even made a loss of 24 million dollars attributable to the shareholders. A year earlier, Shell had made a surplus of 6 billion dollars here.