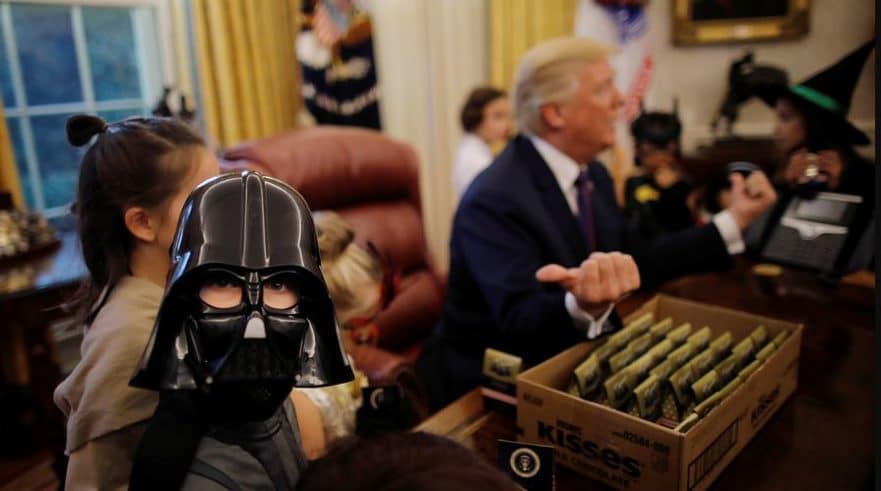 Investors not too scared on Halloween

Negative news about the Chinese-American trade dispute and weak economic data hit Wall Street. Doubts are growing about a quick solution to the customs dispute between Beijing and Washington. As the news agency Bloomberg learned from negotiating circles in the trade dispute, China doubts that a long-term agreement can be reached with the USA under US President Donald Trump. Early this morning, the government’s purchasing managers’ index for Chinese industry had already shown how much it is suffering from the tensions in both countries.

In addition, according to October data from companies in the Chicago region, sentiment continued to deteriorate, falling to its lowest level since December 2015. Analysts had expected a slight improvement in sentiment. Consumer spending by US private households in September also rose more slowly than expected.

The US equity market was dominated by caution on Thursday. The Dow Jones opened with little change, but then fell to red territory and closed 0.52 per cent lower at 27,046.23 points. The NASDAQ Composite started the meeting a little firmer but also dropped later. It closed trading at minus 0.14 per cent at 8,292.36 points.

The US Federal Reserve announced on Wednesday evening that it would cut its key interest rate for the third time this year. This means that the Fed Funds Rate is now moving within a range of 1.5 to 1.75 per cent. Besides, on Wednesday after trading, several US heavy-weights came up with their figures that were also in the eye of investors on Thursday: Facebook, Apple, Starbucks and Lyft. Economic data published before the stock market launch was better than expected.

The renewed interest rate cut by the US Federal Reserve supported the Asian markets. Weaker-than-expected economic data, on the other hand, put some strain on the Chinese market. The purchasing managers’ index for the manufacturing sector and the services index fell surprisingly slightly in October.

The EuroSTOXX 50 opened on green territory but was unable to defend the price premiums. It ended the session 0.44 per cent lower at 3,604.41 points.

In Europe, too, the reporting season on Thursday was still in full swing and provided an impetus for trading.

The leading German index Dax 30 lost 0.3 per cent today. At times, however, things had looked gloomier. The Dax fell below 12,800 points in the morning, before it picked itself up again.

The euro held its own at just under 1.1150 US dollars. The economic data released this morning from the Euro-Zone hardly moved the market. The economy in the currency zone grew somewhat more sharply than expected in the third quarter.

Meanwhile, the British pound appreciated. According to media reports, the head of the Brexit party, Nigel Farage, wants to withdraw his constituency candidates for the parliamentary elections scheduled for December. He wants to increase the election chances of Prime Minister Boris Johnson’s conservative party. With a majority in parliament, Johnson could implement his resignation treaty negotiated with the EU. The prospect of an end to uncertainty supported the pound according to traders.

Gold was also in demand. The precious yellow metal rose in price by one per cent to 1,510 dollars per troy ounce, not least due to the weak economic data from the USA.

Oil prices were trading on a similar level like on Wednesday but fell slightly. One barrel of the Brent variety costs approximately $60.20.

Not much happened in the cryptocurrency market either. All major digital assets remained steady and didn’t move much in any direction.

Inflation in the eurozone declines

Inflation in the eurozone is moving further and further away from the European Central Bank (ECB) target of 2.0 per cent. Cheaper energy, in particular, depressed the rise in consumer prices to only 0.7 per cent in October. This is the lowest figure since autumn 2016. In September, inflation was still at 0.8 per cent. The rise in prices was slowed down above all by the fact that petrol, heating oil & Co. were on average 3.2 per cent cheaper in October.

The genetic diagnostics and biotech group Qiagen achieved lower sales growth in the third quarter than had previously been hoped. Due to weak business in China, currency-adjusted revenues from July to September increased by only three per cent to USD 382.7 million, as did the MDax company. Previously, management had targeted an increase of four to five per cent. Adjusted for special and currency effects, earnings per share were $0.36, in line with guidance.

At the same time, the company corrected the revenue forecast, which had been revised downwards at the end of July already. The company expects full-year sales growth of four per cent, excluding currency effects.

The car manufacturers Fiat Chrysler Automobiles (FCA) and Peugeot SA (PSA) are seeking a merger. The companies announced on Thursday that they wanted to join forces to create a world leader in sustainable mobility. The plan is for a company to be owned equally by the FCA and PSA shareholders. This would create the world’s fourth-largest automobile manufacturer after Volkswagen, Toyota and Renault-Nissan, measured by sales.

The Swiss National Bank defies the negative interest rates and is profiting from the stock market boom. In the first nine months of the year, the SNB recorded a profit of CHF 51.5 billion. In the same period last year, the SNB recorded a loss of CHF 7.8 billion. The central bank’s result depends on fluctuations in the value of its foreign exchange reserves, which amount to hundreds of billions of francs. These include equities and bonds from abroad. The central bank had bought these in the course of earlier interventions on the foreign exchange market to weaken the franc and thus support the Swiss export economy.