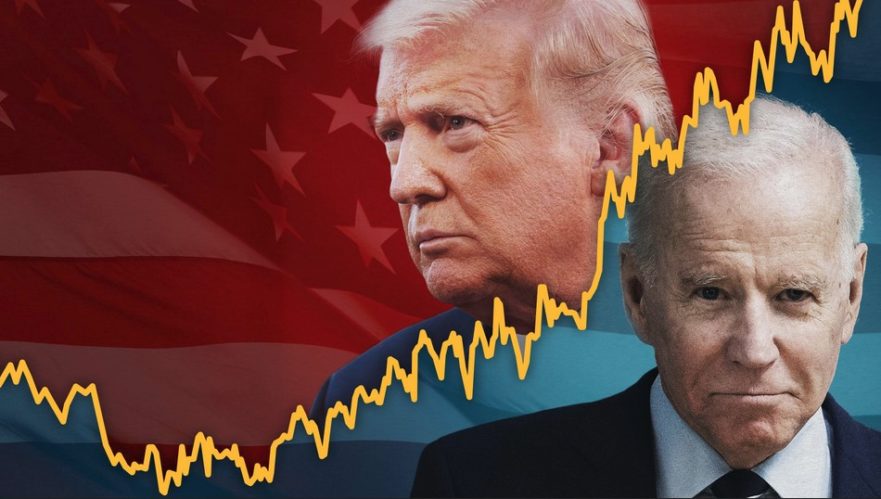 Who will be the next US President? Investors and most market analysts are sure: Joe Biden will move into the White House. In the hope of a clear election victory for the Democrats, they stock up on shares. Will the bet pay off?

While millions of Americans are still going to vote, the election has already been held for the stock market. It is counting on the “blue wave”, i.e. a landslide victory for the Democrats. The risk of an unclear election outcome is wiped aside.

A clear election outcome would be the best thing that could happen to the stock markets. On the other hand, a hanging vote for weeks, which is not unlikely, would put a strain on the stock markets. The only thing that is clear so far is that there will probably not be a clear result on Wednesday morning – because of the high percentage of postal voters, which makes counting difficult. It does not seem impossible that courts will have the last word on the outcome of the election – as they did in 2000. So the stock markets should not rejoice too soon!

Wall Street posted clear gains on US election day. Bets on a “blue wave” and thus a clear victory for the Democrats thus spurred the stock markets.

The Dow Jones already opened with a profit and ended 2.06 per cent higher at 27,480.03 points. The technology-heavy NASDAQ Composite rose by 1.85 per cent to 11,160.57 units, after it had also already been trading higher when the starting bell sounded.

The focus was, of course, on the US presidential election. Many analysts anticipate a clear win of the Democrats which would benefit the markets, at least short term.

Investors in the Asian stock markets showed confidence on Tuesday.

Japan’s leading index, the Nikkei, was closed on Tuesday due to the holiday season. On Monday it had climbed by 1.39 per cent to 23,295.48 points.

On the day of the US elections, investors in Asia were optimistic and pushed the markets further up. In Japan, trading was halted on Tuesday due to “Culture Day”. Meanwhile, market participants were eagerly looking ahead to the USA.

In the wake of the strong US stock markets, the Dax 30 also increased its gains. It closed almost 2.6 per cent higher at nearly 12,089 points. Since the low of 11,450 points last Friday, the leading German index has already risen by more than 5 per cent.

On the foreign exchange market, on the day of the US presidential election, the euro largely defended its lead from European trade in US business and held above the 1.17 US dollar mark.

In the hope of a fresh breeze for the global economy, oil prices also rose again. The North Sea Brent crude rose by 1.4 per cent to 39.50 US dollars per barrel. WTI oil rose by 1.30 US dollars to 38.12 US dollars. Both types of oil also benefited from ongoing speculation about an extension of the current production brake by the export cartel Opec+.

The price of gold also rose by 0.6 per cent to 1,906 dollars per troy ounce (31.1 grams). According to stock market experts, it was boosted by the depreciation of the greenback, which makes the precious metal more attractive for investors outside the USA.

The online payment service PayPal continues to benefit from the trend towards online shopping during the Corona crisis. In the third quarter, net profit rose by 121 per cent year-on-year to $1.0 billion (0.9 billion euros), the company announced on Monday after the close of the US stock market. Revenues increased by one quarter to 5.5 billion dollars. The total volume of payments processed grew by 36 per cent to almost 247 billion dollars.

As in the previous quarter, Paypal benefited from the online shopping boom during the pandemic. The company also raised its annual forecasts and now anticipates revenue growth of between 20 and 21 per cent and an increase in net earnings per share of between 37 and 38 per cent for 2020.

Although the quarterly figures exceeded analysts’ expectations, PayPal shares on the NASDAQ finally fell 4.23 per cent to $179.81. However, the share price has already risen by 74 per cent over the year.

The shares of betting provider Bet-at-home increased by around 15 per cent, the highest level since the summer. The German betting company has been granted a nationwide concession for sports betting in Germany by the Darmstadt Regional Council. According to the company, customers can bet up to 30,000 euros per month under special conditions.

The world’s largest computer manufacturer made a profit leap in the middle of the corona crisis. Net earnings climbed 53 per cent to $310 million in the past quarter, the Chinese company reported. This was significantly more than market analysts had expected. Sales increased by seven per cent to 14.5 billion dollars. Lenovo, known in Germany above all for the Aldi supplier Medion, is benefiting from increased work in the home office, which has led to the purchase of new technology in many households.

The world’s largest IPO has burst. Two days before the planned stock exchange debut, the Shanghai and Hong Kong stock exchanges thwarted the payment processor Ant Group. They suspended the IPO. The surprising step was justified by the fact that the “regulatory environment” had changed significantly. Ant wanted to start simultaneously on the Shanghai and Hong Kong stock exchanges on Thursday. With an issue volume of 37 billion US dollars, Ant would have become the largest IPO in the world. The shares of Ant’s mother Alibaba dropped by 9 per cent.